Welcome to Opposite Land, land of opposites 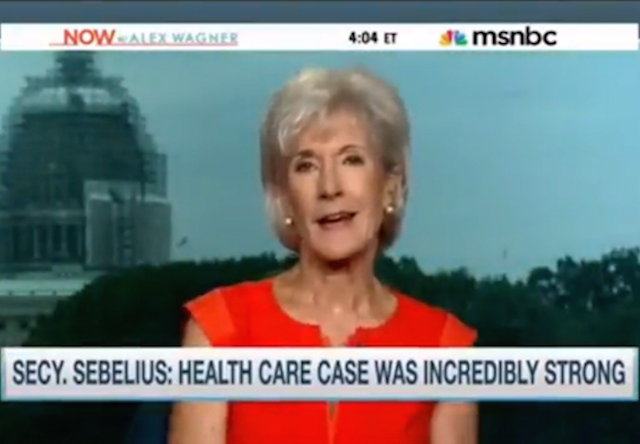 Last week’s breathtakingly disappointing Supreme Court decision in the King v. Burwell Obamacare subsidy case still has activists reeling. Where do we go from here? Burwell was a narrow case, but its ruling is one more brick we’ll have to deal with when tearing down the health care house that Barack built.

Still, progressives are riding high in the wake of the ruling, using it as a tactic to bolster confidence in the program and fight back conservative opposition to the health care law. Former HHS Secretary Kathleen Sebelius took to the airwaves to praise the ruling and above all, defend her pet program—by insisting that people stop her on the streets to thank her for Obamacare.

I think this law has always been about people who wanted and needed desperately affordable health coverage. There’s 6.4 million people who now know the coverage that they have, can continue on with subsidies and millions more who can take advantage of it. I’ve been a lucky one, I’ve always had affordable available health care. So I feel great for the people who talk to me every day in the grocery store and on airplanes and stop me on sidewalks and tell me that this has changed their life forever. They no longer have to worry about affording health care if they get sick, taking care of their kids and this is a very good day for those Americans.

I don’t think I can publish here what I would say to Kathleen Sebelius if I saw her on an airplane.

Something she said toward the end of the interview caught my attention; she speaks about Republicans in Congress not being able to come up with a replacement to the ruinous policy she is partially responsible for. The narrative on health care in America has coasted downhill, from “the system is broken,” to “the system is less broken,” to “we have no choice but to fix the system we originally had.”

It’s clever. Sebelius knows that Obamacare has largely been a disaster—both practically and ideologically—for the country. She also knows that, for every unicorn on the street who has benefited from the program, there are 5 everyday Americans who have seen their premiums skyrocket, their deductibles crash through the roof, and their consistency of care interrupted.

When it comes to politics, memories—even those of engaged voters—run short. We have first-hand knowledge of the fact that “health care in America is a mess,” and “needs to be fixed.” Many people have forgotten that what got us here in the first place was an effort to “fix the system,” so for progressives, the best possible outcome is for their Republican opponents to struggle to find a “fix to the fix.”

Repeal? Repeal and replace? Whichever way Republicans go once they seize control of the White House (I’m enjoying my weekend optimism) they’re at least likely to have an easier time than Democrats when convincing the American people that the latest fix will repair everything that Sebelius and her colleagues destroyed during the previous Administration.

Increased taxes, rationed health care, and legal triage. You would think $14 trillion and counting, and borrowed funds from Medicare, would have been sufficient. Perhaps that’s why they didn’t conduct state-level trials. Also, just how much “planning” will be required to ensure viability of this unwanted, inconvenient clump of laws and policies?

You DON’T love Obamacare? You don’t support gay marriage either? We want to have a little talk with you.

With 545 people OF our government and their staffs, exempted and thereby insulated from the effects of this mandate

“So I feel great for the people who talk to me every day in the grocery store and on airplanes and stop me on sidewalks and tell me that this has changed their life forever. ”
I pay attention to the news and the totalitarians in charge, I wouldn’t recognize her, I doubt if ANYONE has approached her in a store, on an airplane or in the street to talk to her about healthcare.

The idea that people are thanking her personally “every day” is not remotely plausible.

The people who benefit most from the law probably don’t even speak English.

Welcome to Opposite Land, land of opposites

Those of us of a certain age, or geeky nature, recognize this as Bizarro World come to life.

There will never be a repeal or replacement of this cluster* of a law. All we shall ever see is a patchwork of ‘fixes’ and continued fund raising.

I’m pretty sure the GOP as currently led has no stomach for doing anything about Obamacare – whether they have the White House or not.

And Obama claims it’s all working “better than expected.” These people either are totally delusional, or they just lie through their teeth as naturally as they breathe. In the case of Obama, it’s probably both.

Kathleen, honey – you’re a moron and a hack. And Obamacare has rendered our healthcare system FUBAR. I trust you know what that acronym stands for.

That’s the best I can say in polite company ~

problems with Obamacare are:

2) Means testing for subsidies which is only calculated a year and half or more after the fact, and which assumes people’s incomes are constant.

3) It’s not affordable for many

It is going to be hard to come up with something really good, but the individual mandate and the means testing has to be goitten rid of.

Sebelius, like all liberals, is incapable of recognizing or dealing with the Real World. We used to lock such people up, for their own safety, but the liberals closed down those facilities years ago. It’s almost like they had an agenda…