Will she? Won’t she? 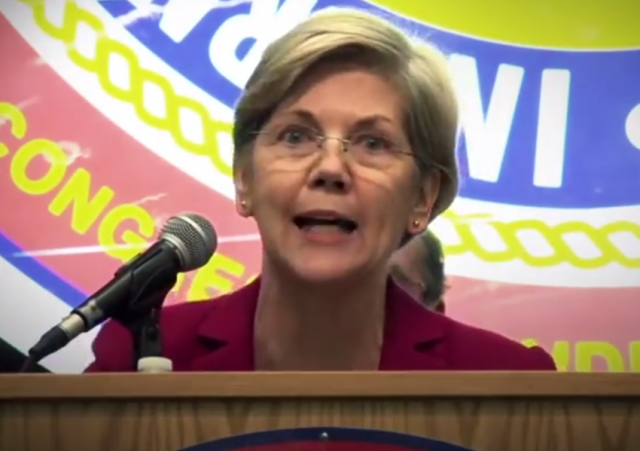 They way Elizabeth Warren’s current devotees talk about Elizabeth Warren reminds me very much of of the way Hillary Clinton’s devotees once talked about Hillary Clinton. During my time in high school, undergrad, and law school (so, since 2003 to a couple of years ago,) I remember my girlfriends speaking with awe about the woman who beat the mortification of a cheating husband (who was also the President) to rise to such great political heights, under such pressure, and in the face of such scrutiny and opposition from evil Republicans determined to take out the first woman to ever chip away at the presidential glass ceiling.

They didn’t just admire her; they loved her, much in the same way that Warren’s supporters have now devoted themselves to the prospect of a presidential run.

Well, at least they were devoted. They’ve also been rebuffed by the woman herself (even though the MSM really seems to want her candidacy), and discouraged by a lack of any indication that people close to Warren were setting up a campaign infrastructure. So discouraged, in fact, that Run Warren Run, the drafting campaign set up by Democracy for America and MoveOn.org Political Action, is suspending its operations next week.

“Even without her in the race, Elizabeth Warren and the Run Warren Run campaign she inspired have already transformed the 2016 presidential election by focusing every single Democratic candidate on combatting our country’s income inequality crisis,” Charles Chamberlain, executive director of Democracy for America, said in a statement.

“We still think there’s plenty of time for Sen. Warren to change her mind, but now that we’ve shown that she has the support she would need to mount a winning a campaign, we’re excited to take the grassroots juggernaut we’ve built with our members and stand shoulder-to-shoulder with Warren in the battles ahead.”

Maybe she was too much.

Earlier this month, Warren supporters lashed out at President Obama with accusations of sexism after Warren defeated a procedural vote regarding the fast track trade authority. Obama criticized her for this move, and was immediately lambasted by his own party, using the same tactics Democrats usually use against people like Mike Lee.

Warren is a trigger point; she seems to encourage with her mere presence the kind of behavior that has made social justice warriors (look up “#SJW” on Twitter) so infamous. I think it’s entirely possible that the powers that be look at her and see a hair trigger, that if pulled could instigate a circular firing squad that would destroy their chance to take back the Senate and retain the White House.

She is, however, good for business.

Ilya Sheyman, the executive director of MoveOn.org Political Action, said in a statement that the group will reposition its efforts to work with Warren on shared issues, including the trade deal.

“The Run Warren Run campaign has changed the conversation by showing that Americans are hungry for Elizabeth Warren’s agenda—an agenda that rejects the rigged status quo in Washington and puts working and middle-class Americans over corporate interests,” he said in a statement.

“Now it’s time to suspend our active draft efforts and pivot to standing alongside Sen. Warren on the big fights ahead, starting with stopping Fast Track for the Trans-Pacific Partnership.”

That’s an elegant little pivot—from candidate support to issue advocacy—and one that’s sure to benefit MoveOn in the long run.

Will she run? I have no idea; but if she does, you can bet that her supporters will be ready and waiting to dust off the banner.

You can read Legal Insurrection’s body of work on Elizabeth Warren here.

Lizzie Borden Warren, you can run but you can’t hide from your self.

Oh yes, I also meant to point out that Hillary is just as big a post-turtle as Obama!

The Democrats are misogynists. Democrat War on Women.

They make an exception for Granny Clinton. Granny gives out goodies if you put money in the Clinton Foundation Crime Machine.

Run Warren Run, the drafting campaign set up by Democracy for America and MoveOn.org Political Action, is suspending its operations next week

This makes sense. It’s not helping Hillary Clinton any more.

(What? You thought the Draft Warren campaign was about anything else other than helping Hillary Clinton?!!)

Now, it’s only attracting support for Martin O’Malley (who is somewhat friendly to Hillary Clinton) and, worse for them, Bernard Sanders.

It is no more helping her coronation.

If any of this was an honest operation, they’d now either still be cointinuing or endorsing Bernard Sanders.

There is exactly one reason Warren would not run: Because she doesn’t want the pay cut. Hillary might have the same issue if not for Bill’s “earning” power.