A simple explanation: They love her. 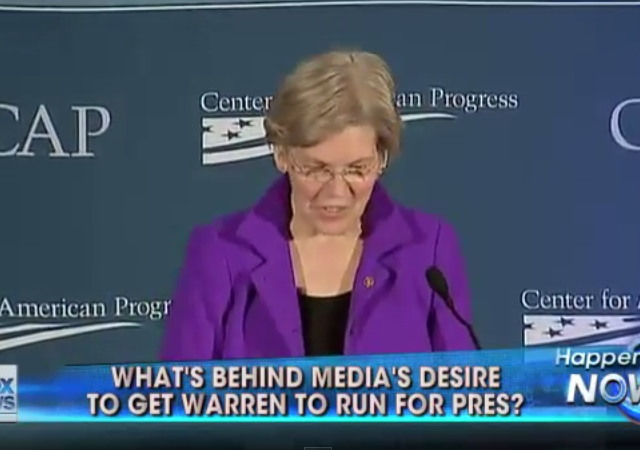 You may have noticed that almost every time Elizabeth Warren is interviewed, she is asked if she plans to run for president in 2016.

FOX News media analyst Howard Kurtz thinks it’s because the press is longing for a competitive race on the Democratic side in 2016 and perhaps because journalists feel an “affinity” for Warren.

Watch this segment from FOX News on Saturday:

I think there’s a much simpler explanation for the media’s obsession with Warren; they love her.

The media is overwhelmingly liberal and many journalists view Warren as the next Obama.

They’ll settle for Hillary and even pull the lever for her in 2016 if they have no choice, but they’d rather get behind a candidate like Warren who has become the left’s standard bearer on issues like income inequality.

An example of the liberal media’s desire for Warren to run for president can be seen at the Boston Globe, which recently devoted multiple pages to the cause in a single issue.

Look no further for a textbook example of why the Boston Globe is seen by critics as kneejerk liberal.

In today’s paper, most of the cover and two full inside pages within the “Ideas & Opinion” section (eight pages in all) are devoted to a single cause — urging Elizabeth Warren, a Bay State senator and the Democrats’ most ardent class warrior, to run for president.

The lead editorial is titled “Senator Warren, step up and run,” next to a huge photo of a contemplative Warren on the first page of the section. Adjacent to the editorial is a column by Anna Galland, executive director of MoveOn.org Civic Action, with the headline, “Her message for the middle class resonates across the spectrum.”

Just in case Globe readers miss the message that the broadsheet is bonkers for Warren, two more op-ed columns inside amplify the point. American Prospect co-founder Robert Kuttner, a Brandeis professor and HuffPo contributor, writes a piece titled “If she does run, she’ll surprise the skeptics.”

Making it four for four is an offering from Bloomberg Businessweek columnist Joshua Green, headlined “Party needs a credible threat to Clinton in the primaries.”

A progressive freshman senator with few accomplishments to speak of and a mythical life story.

What’s not to love?

As always, you can learn the truth about Elizabeth Warren at ElizabethWarrenWiki.org.

She call it the Pow Wow Party.

Isn’t that a redundancy meaning something like Party Party? Which, come to think of it, isn’t a bad name for a political movement.

The Party Party. I like it. I’m considering a third party run for the presidency and may want to steal that.

Warren’s problem is she can’t really run from her far-left positions, unlike Obama whose career track was to keep a low profile and wait for the Affirmative Action offers to come in. By the time he had failed at one job, there was another for him.

But I hope she runs. It would be nice to have a Democrat say what they really plan – for a change.

They love her because she sounds like a true blood socialist.

tack back towards the center with a wink and nod to her base….?

Only a compliant worshipping media could cover that up…….hey now!

The debate. Cruz Vs Fauxchohontas. I’ll pay to watch.

1st round KO. Much blood. Concussion.

My mind’s voice can’t help but hear that phrase in the voice of the little girl from Forrest Gump.

Deliciously, the video that now-famous still was taken from was a Legal Insurrection exclusive!

To run fast, Lieawatha needs a new pair of moccasins.