Boko Haram jumps back on the propaganda bandwagon

Boko Haram jumps back on the propaganda bandwagon 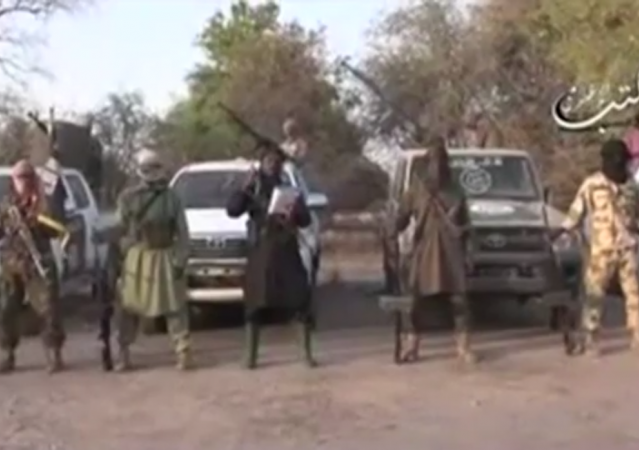 Last month, international investors aired their concerns about how instability in Nigeria could shift what was once a balanced and successful economy into dangerous territory. The country had just ousted their incumbent President, and replaced him with a man claiming a serious commitment to ending the rise of Islamic extremism; but the promise of political overhaul wasn’t enough. Coalition forces claimed multiple victories over Boko Haram, eradicating their hideouts and rescuing hostages; yet attacks on citizens living in the embattled villages of northeastern Nigeria continued.

Terror remains the norm, and yesterday, residents of the northeast Nigerian city of Maiduguri woke up to find their world on fire. A band of Boko Haram militants attacked the city with bombs, and executed a suicide bombing that took the lives of at least 20 people. It wasn’t the first attack on Maiduguri, and it certainly won’t be the last: late last month, newly elected President Muhammadu Buhari declared the city the headquarters in the war to curb the Islamic uprising.

Boko Haram may be under fire, but when it comes to the business of terrorism (i.e., creating terror), they continue to make headway, and their new efforts at distributing propaganda have cast doubt on just how effective coalition efforts to eradicate the group have been.

Boko Haram isn’t prepared to take the offensive lying down. They released a video yesterday refuting claims that coalition efforts to defeat the group have been successful:

Also Tuesday, Boko Haram released a new video that allegedly shows militants shooting wounded Nigerian soldiers in the head and beheading a man in civilian clothes as well as charred parts claimed to be the remnants of a downed Nigerian jet fighter.

The video, the first released since it pledged allegiance to the Islamic State group, has no sign of longtime leader Abubakar Shekau, previously a mainstay of the group’s videos.

There was no explanation for his absence. Nigeria’s military has claimed many times to have killed Shekau — only to have him later resurface.

The video gloats over alleged disunity in the multinational force that in March announced it had driven Boko Haram from all towns and villages. Nigerian neighbors Chad and Niger have said the fight against Boko Haram would be long over if they had better cooperation from Nigeria.

A few months ago, a friend of mine who escaped Nigeria told me that a single battalion of American soldiers could drop into the region and eradicate Boko Haram in the space of an afternoon. I don’t know if this is still true, but as I said above, when it comes to actually creating terror, Boko Haram still has a great deal of power in Nigeria. We know that they’ve taken serious hits to both manpower and infrastructure, but that’s not where their power comes from.

Boko Haram’s real power comes from their ability to terrorize the population into submission. They can do that with 1000 soldiers and a barrage of explosives, but they can also do it with 15 soldiers, 10 machine guns, and a handful of machetes.

Until the UN-backed coalition forces find a way to both fight Boko Haram and make their people feel safe again, Islamic extremism will maintain their hold on northeastern Nigeria—which means we could be in for a very, very long fight.

More specifically, Boko Haram’s power comes from the idea it wields bad juju and is untouchable by the army. Now that a good Muslim is President, it’s a matter of reducing Boko Haram from an invincible, inevitable force to just another guerilla outfit.

This is kind of tentative, so feel free to kick it around…

These Islamist groups are not “insurgents” in the classical sense.

Take the Viet Cong as “classical insurgents”. They were guerrillas, fighting a “low-intensity” war. Fundamental to that war was winning the “hearts and minds” of the indigenous population in the local area of operation. They would use murder and torture, certainly, but they also brought in benefits intended to convert people to the cause.

From what little I see of the conduct of Boko Haram, they don’t do much by way of even attempting to use anything but naked terror. They just kill, loot, capture and extort. They don’t even try to do as much as does ISIS in seeking to hold and administer territory.

They are much more like simple pirates, but with a Islamist lust to kill other religionists.

I see I still have my lil’ asstroll attached…

Obama and Clinton felt that Boko Haram were justified because the (now previous) Nigerian government oppressed them and weren’t doing enough to appease them. No, really. The Obama administration disallowed anyone acting against Boko Haram because they needed the instability they caused to oust the former government, which was successful. Except the new boss is as bad as the old boss.

This info is all over the internet, but you’ll never see it in an LI article for some reason. This article is a good general account:

Another tidbit of info concerning Obama’s motivations re: Boko Haram in Nigeria:

“Allegations are mounting that the Obama administration withheld weapons and intelligence support from Nigeria’s fight against Boko Haram in an effort to boost the chances of the Muslim candidate for president, who is a client of the political firm founded by key Obama strategist David Axelrod.” [Italics are Henry’s]

Well, let’s face it, Mr. Hawkins. The author is miles ahead of you on sources.

“A few months ago, a friend of mine who escaped Nigeria told me that a single battalion of American soldiers could drop into the region and eradicate Boko Haram in the space of an afternoon.”

So there you go.

It’s like reading a story on 1942 Germany with no mention of Adolph Hitler. On the other hand, another LI writer recently assured us that the French Resistance really existed. Has no one seen Hogan’s Heroes reruns?

Boy, those people sure are peace-loving, aren’t they?

Well the Muslim guy won. To his credit, he seems to have decided Boko Haram has come to an end of its usefulness to his cause and has actually gotten the army to do a couple of things about it.

Meh. That was an attempted reply to Henry Hawkins, above. Something went awry. Anyway, point stands. If Muslims are willing to fight terror far be it from me to want to stop them.

The ‘fight’ is mostly lip service. The prez of Nigeria is one of David Axelrod’s clients, after all. Boko Haram has gone nowhere. They’re still operating as ever.