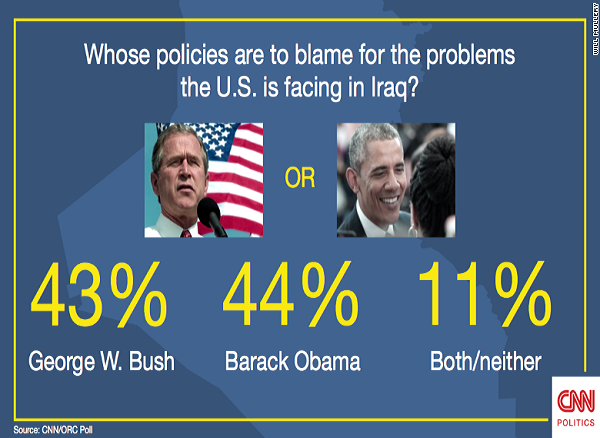 When he withdrew troops from Iraq, Obama himself proclaimed, “we are leaving behind a sovereign, stable, and self-reliant Iraq.”  That was in 2011.  Flash forward to now, and Iraq is none of those things; indeed, Iraq is now an ISIS strong-hold, part of their declared caliphate.

Throughout Obama’s presidency, we’ve heard him blame President Bush for everything from the still-flailing economy to the rise of ISIS.  His supporters within the media have ensured that this message is the one that Americans hear most often, and for (too many) years, (far too many) Americans have believed what they were told.

A CNN poll found that, for the first time, more Americans blame Obama than President Bush for the instability in Iraq:

[N]early the same percent of people blame President Barack Obama’s policies for the current situation in Iraq as those who hold President George W. Bush responsible, the survey showed.

Overall, 44% say they blame Obama’s policies for the problems in Iraq and 43% blame Bush; 11% say both are equally responsible.

Those figures are largely driven by partisanship, with 79% of Democrats saying Bush is at fault and 75% of Republicans placing the blame on Obama. Independents, who generally lean a bit more toward the GOP than the Democrats, tilt toward blaming the current president, 48% blame Obama compared with 37% who blame Bush.

The difference here is with independents.  As Hot Air notes,

That’s big news potentially for 2016, both generally, in how it suggests the public may be newly receptive to a Bush-style hawk who’ll vow to smash ISIS, and specifically for Jeb Bush, whose Iraq albatross now might not be quite as heavy as everyone thinks.

How’d we get from “Bush’s war” to Obama sharing the blame for the fall of Iraq? Pretty simple, really. Per CNN’s crosstabs, in May 2009, 52 percent said things were going very or moderately well for the U.S. in Iraq. Today, when ISIS is inserted into that question, just 38 percent say so. Last September, support for Obama’s handling of ISIS split along partisan lines at 45/49; today, with ISIS in control in Ramadi and threatening Baghdad, it’s 32/63. All of which is to say, starting when Obama took office and even for several years afterward, the public had come around to believing that Iraq was finally on the right track. In fact, Obama had come around to believing that Iraq was on the right track. Two weeks before the last American soldier left the country in December 2011, he gave a de facto victory speech at Fort Bragg. “We’re leaving behind a sovereign, stable and self-reliant Iraq,” he told the troops. “By battling and building block by block in Baghdad, by bringing tribes into the fold and partnering with the Iraqi army and police, you helped turn the tide toward peace.” In his rush to take credit for bringing the troops home by effectively declaring “mission accomplished,” he set the stage for the public to turn on him, not Bush, when everything fell apart later. And now they have. Congrats, champ. You earned it.

Watch Obama declare Iraq a “success” and “an extraordinary achievement”:

This didn’t have to happen. What a crime.

The drop is recent, or accelerating.

Obama is now being blamed not just for the rise of ISIS and the fall of Mosul in 2014, but for not correcting things after that.

I have nothing but seething contempt for Obama and those who supported him in his campaign to be president. To think of all the blood and treasure that we lost in order to finally have a stable scenario in Iraq just to have a man who wasn’t content just to disagree with his predecessor but had to sabotage all that was gained.

I knew this Republic died the night this monster was reelected, but it doesn’t make it any easier to witness its death throes.

Many, many people, not just LIVs, do not know or understand that Iraq was won and pacified when Obama took over, and that he lost it by pulling out and abandoning it to various extremist elements. They think Bush lost it several years earlier.

1. Saddam: What We Now Know (link) by Jim Lacey* draws from the Iraq Survey Group (re WMD) and Iraqi Perspectives Project (re terrorism). * Dr. Lacey was a researcher and author for the Iraqi Perspectives Project (link).
2. Explanation (link) of the law and policy, fact basis for Operation Iraqi Freedom.
3. UN Recognizes ‘Major Changes’ In Iraq (link) by VP Joe Biden on behalf of the UN Security Council.
4. Withdrawal Symptoms: The Bungling of the Iraq Exit (link) by OIF senior advisor Rick Brennan.
5. How Obama Abandoned Democracy in Iraq (link) by OIF official and senior advisor Emma Sky.

I wonder what the real numbers are? CNN must have tried every polling trick in the book to get Obama’s number down to 44%, just to make it look close.

Overall, 44% say they blame Obama’s policies for the problems in Iraq and 43% blame Bush;

Don’t pretend that our corrosively biased media hasn’t got a disproportionate influence on public opinion in the US.

Don’t forget to count the at least 10% bias in their numbers. 54% to 34% is a much more probable spread. If asked, I doubt that even half of the people who support the present president’s actions in Iraq could name any of them, and the other half would name Bush’s actions.