A special re-appearance of the Saturday Night Card Game 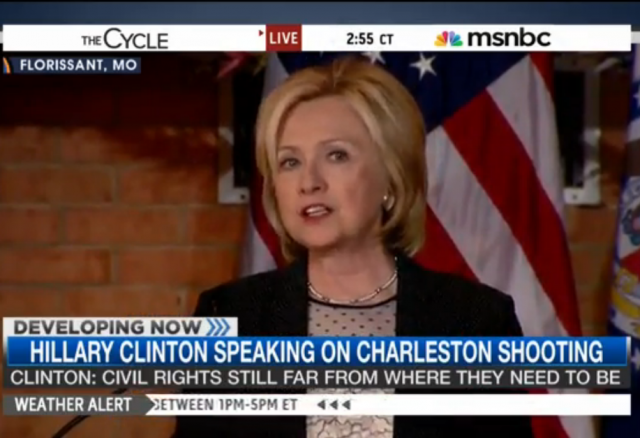 There, I said it.

And so did Hillary Clinton, creating a backlash:

Hillary Rodham Clinton is facing backlash for saying that “all lives matter” in an African-American church in Missouri on Tuesday, offending some who feel that she is missing the point of the “black lives matter” mantra.

Mrs. Clinton’s remarks at Christ the King United Church of Christ in Florissant, Mo. — only a few miles north of Ferguson, where a black teenager was shot by a white police officer last August — came during a broader discussion of civil rights in America.

She was talking about how a disproportionate number of young people of color are out of school and out of work and, explaining that everyone needs a “chance and a champion,” she recalled how her mother was abandoned as a teenager and went on to work as a maid.

“What kept you going?” Mrs. Clinton remembered asking her mother. “Her answer was very simple. Kindness along the way from someone who believed she mattered. All lives matter.”

The remark caused a stir on social media, with some African-Americans on Twitter suggesting that Mrs. Clinton had lost their votes.

Here were some reactions, via Twitchy:

NPR called it a Three Word Misstep, though based on the url it apparently was originally titled a “three word gaffe”: 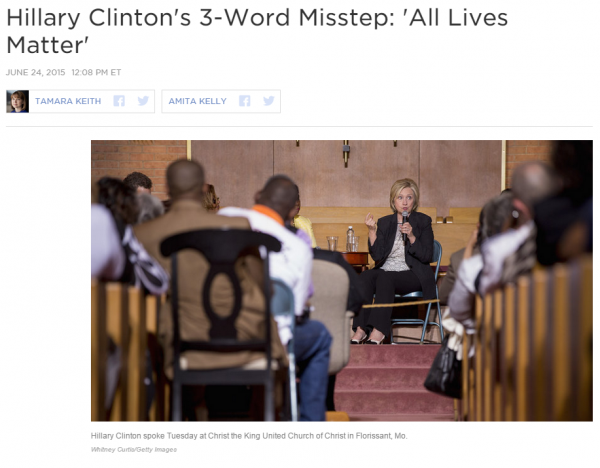 The Saturday Night Card Game is on hiatus, but not for lack of material.

Is she now applying bondo to her face to kill the wrinkles?

Beat me to it. She’s had work done which would explain her disappearing act.

Clinton is right. Progressive liberalism under a pro-choice doctrine, including selective-child, class diversity, and selective exclusion has left its mark on civilization. The Party and social complex, including “civil rights” businesses, have delayed reconciliation and poisoned human relationships. Lower the flag that flies proudly to celebrate the failure of pro-choice policies.

Clinton had no idea what she was talking about. All she did was read from a teleprompter. (Sound familiar?)

Tomorrow the teleprompter will change, and the corrupt old crow will say something else.

She’s reached the right conclusion, while identifying the wrong causes. I’m familiar with Democrat politics. They are right in some aspects of environmental stability, but wrong on everything else. Their strategies and tactics leave a lot to be desired. Hopefully, Republicans (or another party) will do better. Unfortunately, overlapping and convergent interests with Democrats are often their undoing.

It’s a bitch. One of the few times you utter something truthful, you’re still wrong. Only black lives matter Hillbilly.

Even with Dylann Roof, blacks are still ahead of everyone else for the year in killing blacks AND whites, and have been for decades.

It is interesting how the “blacklivesmatter” mantra does not seem to reach very deep into the black community. Exhibit A is any urban area you choose to look at.

Hillary!’s audience just wanted to hear the “talk”, but they do not seem willing to walk the walk…

Funk those who are so stupid as to criticize Hillary, who I cannot stand, for that statement.
The lunacy is there for all to see.

Sucking up to black racists is a genuine art-form—and apparently it’s just one more thing Hill isn’t terribly good at.

Amazing, because it’s so easy for the spineless to do.

Nice tweet above by “Citizen B”. A golden chair where Hillary can park her presumably golden a–.

All Black lives matter – except those in rival street gangs, pushing drugs on someone else’s corner, part of a ‘rap artist’s’ entourage, or . Black on Black crime is already through the roof and getting uglier.

Black lives matter to me about as much as my life matters to them.