Focus on small group shouting anti-Arab slogans while ignoring tens of thousands of other revelers. 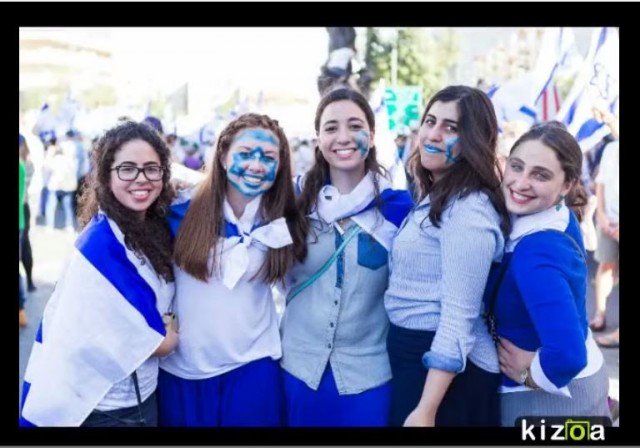 Last Sunday tens of thousands of Israelis participated in the annual Jerusalem Day march and flag procession, which runs through the Old City’s Muslim Quarter en route to the Western Wall.

Jerusalem Day—Yom Yerushalayim—celebrates the reunification of the city following the 1967 Six Day War. As a tribute to the holiday, in an earlier post I offered at least five reasons that Yom Yerushalayim is worth celebrating.

Last week, Israel’s Supreme Court rejected a petition to change the “provocative route” of the march to avoid potential confrontations between the revelers and east Jerusalemite Palestinians. Two Israeli leftist NGOs argued that in previous years the flag-bearing procession had sparked violence and “unnecessary disruption for local residents”.

The court ruled that the march could take place along its usual route, but ordered the Jerusalem district police to arrest any participants engaging in “violence, vandalism, or any other displays of anti-Arab racism”. The state promised to take adequate steps to enforce the law (see my post “The Battle Over Jerusalem Day March”).

According to news reports, some 2,000 police were deployed to secure the parade, and rabbis and march organizers called for participants to refrain from violence.

So, how did it go on Sunday?

Was the Jerusalem Day March a Racist Rampage?

According to a number of news sources there was a “flare-up” with “marchers attacking Palestinians” and “clashes erupting” between “Israeli hardliners” and “ultra-nationalists” (see Haaretz here, The New York Times here, and Al Jazeera here).

But don’t take their word for it.

Here’s a Reuters video clip of the flag procession at the entrance to Damascus Gate. Judge for yourself:

Even the Israel-bashing +972 Magazine can’t seem to dredge up much more dirt beyond a few rowdy kids chanting nationalist songs, and some ugly curses in Arabic (mostly about people’s mothers) traded by a couple of pumped up adolescents.

For the most part what’s on view in this clip is yeshiva bochorim (seminary youth) following police instructions, and Palestinian young people resisting arrest:

Standing in front of Damascus Gate at the holiday’s close, a reporter for i24News—a relative newcomer on the Israeli media scene, but already earning a well-deserved reputation for its accurate and non-biased news coverage and intelligent editorials—offers this overview of the “kind of day it was in east Jerusalem”:

So was this the “wild rampage” by the “lords of the land” that Meretz chairwoman Zehava Gal-On predicted?

To be sure, not every Jewish reveler behaved admirably. In a thoughtful blog about the significance of the Jerusalem Day march for the Jewish people, Vic Rosenthal correctly notes that “There will always be at least one idiot who yells ‘death to Arabs,’ which is embarrassing”.

Well, maybe a few more than one.

Captured in a video that’s gone viral on the web is a group of roughly 25 loudmouth teenagers parading down the streets of the Muslim Quarter, banging on store shutters and taping stickers onto them, all the while chanting ugly anti-Arab and anti-Muslim slurs at the top of their lungs.

It’s not a pretty sight:

But what’s also obvious is that these particular louts were all members of Lehava—LeMeniat Hitbolelut B’Eretz HaKodesh (Organization for the Prevention of Assimilation in the Holy Land).

In the video, the black shirts the kids are wearing are a dead giveaway. They’re Lehava’s signature uniform.

It’s not surprising that these kids would be the ones acting appallingly.

After all, Lehava’s primary objective is to oppose economic, social, and personal relationships between Jews and non-Jews. Its leaders have recently been arrested for inciting racial hatred and indicted for arson on a Hebrew-Arabic bilingual school in Jerusalem. The group has been roundly denounced—including by the President of Israel and the Defense Minister, who prefers to characterize Lehava not as right-wing, but as a terrorist organization.

Their behavior is deplorable. But it needs to be put into perspective. We’re talking about some 25 idiots out of some 30,000 participants.

According to the i24News synopsis, the march was marked by “a little bit of violence”—“scuffles breaking out between local Palestinian residents and the police”.

The Times of Israel also wrote of a “dust-up between Israeli police and Palestinians”.

Palestinian demonstrators weren’t stopped from holding up Palestinian flags and chanting, “With our souls and our blood, we will redeem Palestine” and “Free Palestine”, according to YNet.

JTA notes that six Palestinian protesters were arrested after marchers came under attack.

And The Jerusalem Post reports that several police officers were wounded by rocks, thrown by Palestinian demonstrators near Damascus Gate.

According to all accounts, there were no serious injuries.

Here’s what we also know:

Tens of thousands of Jews chanted the pro-Israel (but not anti-Arab or anti-Muslim) “Am Yisrael Chai” (The Nation of Israel Lives) and carried Israeli flags aloft as they made their way through old Jerusalem to the Western Wall (the Kotel)—holy only because it’s the retaining wall of the Temple Mount (Har HaBayit), which is the Jewish people’s holiest site, “the dwelling place of the Shechina, the presence of God”.

There, tens of thousands danced peacefully in the company of prominent politicians and rabbinic leaders.

A sizeable number of Israeli counter-demonstrators, exercising their own free speech and association rights in the Middle East’s only true democracy, also participated in the march unimpeded. They held up “signs denouncing racism” and handed out flowers to passersby.

But some on Israel’s far-left and the vehemently anti-Israel media bubble have already begun to spin Sunday’s Yom Yerushalayim march into something much more menacing and sinister: an “aggressive show of force”, an “atmosphere of intense hatred”, and an event that “has more to do with domination over Palestinians than celebration”.

I wanted to hear about the march from some young people who were there. So I contacted a close friend whose granddaughters live in Jerusalem. I figured they’d have gone.

I spoke with the girls by phone today.

Ayelet P. (14) participated with her class. She told me:

The parade was very exciting. It was a wonderful experience to be there with everyone singing. I didn’t see any troubles. We joined the parade going through the Ir Atika [the Old City]. It was just a lot of kids singing Hebrew songs.”

Her sister, Eliana P. (18), went to the parade with some friends. She said:

We got to Shar Shechem [Damascus Gate] at about 6:30. We couldn’t get through. The police were stopping everyone and they’d blocked off the area. We were told by someone that it was because the Muslims were protesting. So we went a different way to the Kotel [the Western Wall]. I didn’t hear anybody shouting nasty things. No one was saying anything mean to the Arabs. We stayed until about 10:00. Nothing bad happened the whole time I was there.”

The Significance of Yom Yerushalayim

In an excellent essay, Jonathan S. Tobin recaps what Yom Yerushalayim is really all about: rejoicing in the fact that for the first time in the city’s troubled history the planet’s faithful can worship there freely. As Tobin notes,

it was only when Israel became the sovereign power throughout the city that all the holy sites within its boundaries became open to all peoples and all faiths”.

Despite ongoing “municipal squabbles” and the negative impact of the intractable Israeli-Palestinian conflict on the now unified city, under Israeli rule Jerusalem has “blossomed” and has become a “boon to those who value it as a center of three faiths”.

Some people refuse to see that. They only see what they want to see.

Miriam F. Elman is an associate professor of political science in the Maxwell School of Citizenship & Public Affairs, Syracuse University

What’s your objection to Jews trying to prevent assimilation and intermarriage? What’s the point of having an Israel in the first place if it’s going to promote assimilation? Rivlin openly promotes intermarriage; what a shanda.

They focus on the small group of Israelis for the same reason they ignore the statements of Muslim leaders calling for the slaughter of all non-muslims. They hate Jews in general and Israel in particular.

Yep, teens banging and putting stickers on doors is pretty much the same thing as driving cars into crowds of civilians at train stations, or launching rockets from residential neighborhoods, or digging tunnels to kidnap soldiers.

I hate to be the typical male in this conversation, but my God Israel seems to have a great deal more than its fair share of attractive women. Every time I see pictures and videos from Israel even from peoples vacations the streets and beaches are just full of beautiful females.