The Battle Over Jerusalem Day March

The Battle Over Jerusalem Day March

Kudos to Israel’s High Court for allowing the March to proceed in all of the Old City. 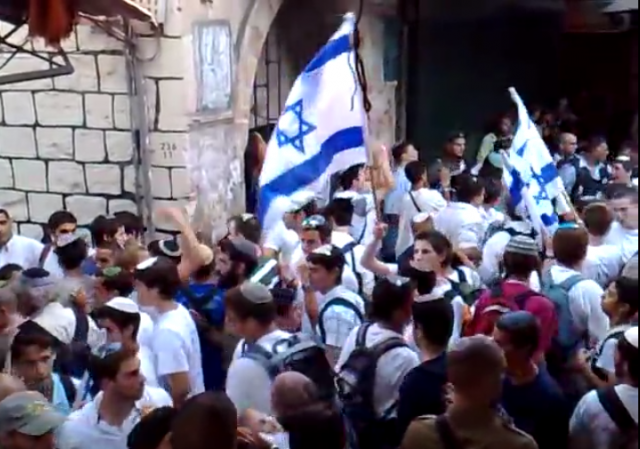 This Sunday is Yom Yerushalayim—Jerusalem Day—the newest holiday on the Jewish calendar, celebrating the reunification of Israel’s capital.

This Sunday’s festivities are expected to attract tens of thousands of Israelis from across the country for the annual march from Jerusalem’s center of town to the Western Wall, and the popular Dance of Flags celebration (Rikudegalim).

The parade traditionally enters the Old City via the Muslim Quarter en route to the Western Wall (the Kotel).

What could be wrong with that?

Because this is Jerusalem — the most contested city on the planet — where no celebratory Jewish procession is going to happen without someone crying foul.

Don’t Rain on My Parade

Last week, a coalition of Israeli leftist activists and NGOs, spearheaded by the organizations Tag Meir (Light Tag) and Ir Amim, petitioned the High Court of Justice to change the route of the march so that it won’t pass through the Muslim Quarter.

They didn’t ask the court to cancel the parade, but to have it take place along a “less provocative route”.

The petitioners argued that the annual march was increasingly becoming a “rally of racism, hatred, and incitement to violence” against the Palestinian population in east Jerusalem, according to news reports.

They have a point.

Last year, an ugly altercation at Damascus Gate between Israeli youth and Palestinians was filmed and posted on You Tube. And the year before 23 Palestinians and 13 Israelis were arrested for disturbing the peace.

But, as reported in The Times of Israel, this Monday the High Court rejected the petition with a “heavy heart”, ordering the police to arrest any participants engaging in “violence, vandalism, or any other displays of anti-Arab racism”.

According to The Jerusalem Post, during the hearing Justice Elyakim Rubinstein said that calling for violence against Arabs during the march isn’t “freedom of speech” but “freedom to incitement”. Justice Isaac Amit further urged the parade’s organizers to denounce hate speech, and for yeshiva (seminary) rabbis to inform their students that displays of anti-Arab racism would get them suspended from school.

For their part, the Jerusalem district police assured the court that they were prepared to document, arrest, and indict participants who violated the law, and would do more to ensure that Arab residents of the Old City had full access to their homes and businesses during the march.

In his letter, Ariel insisted that the Lion’s Gate entrance to the Old City be reopened for the Jerusalem Day march. (The Gate carries enormous significance because IDF paratroopers broke through it as they liberated the Old City during the 1967 war).

It’s been closed for some years for safety reasons as the city’s light rail was being completed.

But the police have yet to lift the ban and aren’t likely to do so by Sunday. As in recent years, the mass procession will be routed through the Damascus and Jaffa Gates.

Pleased with the Court’s decision, Ariel has called on the public to join him in “celebrating Jerusalem Day, to swear allegiance to the Holy City, and to celebrate the work of our soldiers; soldiers who liberated Jerusalem from Arab occupation”.

It’s not chauvinism or bigotry (and certainly not ‘terrorism’) to route the parade through the Muslim Quarter.

Before the British designated the largest part of the Old City as the “Muslim Quarter”, in 1920 some 70% of its inhabitants were Jews.

Writing for aish.com (the go-to site for all things Jewish), Sara Yoheved Rigler notes that almost all of the 1,000 Jewish families who lived in the Muslim Quarter held title to their property, but were driven away from the area in the 1920s and 1930s by Arab hostility and violence:

every Jewish building has, of course, a tell-tale identifying sign: a mezuzah on the right-hand doorpost. The custom of Jerusalem’s Jews was to carve a hollow out of the stone doorpost and place the scroll of the mezuzah inside, plastering over it so that only the Hebrew letter shin was visible. When the Arabs usurped the Jewish property in the Old City, they hacked out the mezuzot, but in most cases they did not bother to fill in the hollows…one could walk through the ‘Moslem Quarter’ and identify the many buildings which belonged to Jews. (Lately, the Arabs got wind of this, and filled in the hollows or totally replaced the tell-tale stones)”.

Kudos to Israel’s High Court for rejecting the NGO petition.

Basically the court ruled that the state needs to do its job. Vandals, rioters, and inciters to violence can be lawfully detained, while everyone else can enjoy their celebratory day.

Memo to Councilman Margalit: in a democracy you have to resist the temptation to shut down the free speech and association rights even of those who you think are jerks.

The Times of Israel has featured two blogs (here and here) that show the range of viewpoints; they’re both worth reading.

The triumphalist and inevitably racist character of the march is beneath the dignity of what could be Zionism’s noble goals and accomplishments, and makes explicit how the juxtaposition of celebrating a military victory with the language of religious superiority can together become a dangerous breeding ground for fundamentalism”.

In another post I offered a variety of reasons to celebrate Jerusalem Day. None of them had anything to do with “parading [Jewish] superiority” over a “losing minority”.

Kurtzer also misses the mark in comparing Israel’s Supreme Court ruling with the N.Y. case involving Pamela Geller and the Metropolitan Transit Authority. Say what you will about the value of an anti-Hamas advertising campaign on N.Y. city buses. But what does a bunch of pumped up adolescents screaming some odious mantras on Jerusalem’s public streets have to do with exposing Hamas’s heinous brutality and murderous Jew-hatred—as Geller is trying to do with her bus ads?

In any event, the courts were right in both cases.

But the real problem is that Kurtzer just isn’t in a partying mood.

He admits that Yom Yerushalayim is a “big deal” for the Jewish people, but he’s still deeply ambivalent about it (he writes “this is just not a Jewish holiday that I celebrate”).

So he’s decided to “create a meaningful discourse” by spending his Sunday indoors, cloistered behind the closed doors of his synagogue in a “Day of Study”.

To each his own, I guess. It’s certainly appropriate to spend the day in quiet contemplation.

But we Jews have enough holidays when we’re stuck inside the synagogue (sorry, Rabbi).

Young Michael Rainsbury, who works for World Bnei Akiva and made aliyah a few years ago, has a better attitude.

Like Kurtzer, he’s also unhappy about the “provocative actions of some marchers” and is “rightly horrified” by the racist chanting (“Death to Arabs!”) that has marred the Flag Parade in previous years.

But he says that:

this picture does not reflect the majority of the parade, and that so many (including myself) are hugely inspired by a sea of young people dancing peacefully in the streets of Jerusalem…To those who argue that Jews have the right to hold a celebratory march through any part of our capital city, I agree wholeheartedly—on condition that the march is peaceful in nature and respectful to those not marching…The reunification of Jerusalem and the restoration of the holiest of Jewish sites under Israeli control constitutes one of the most joyous moments in the history of the Jewish people. This is in itself miraculous, yet the fact that Jews were unable to visit these sites prior to the war only enhances the feeling of religious liberation…The messages of the day are of recognizing God’s hand in history, appreciating the significance of our holy sites and wondering at how our millennia-old yearning for Jerusalem has materialized before our very eyes.”

“To those who argue that Jews have the right to hold a celebratory march through any part of our capital city, I agree wholeheartedly—on condition that the march is peaceful in nature and respectful to those not marching…”

It is better to be respectful of others, but civil rights are not dependent on our being respectful of others. The Nazis can march in Skokie. The Westboro nutters can scream nasty things at funerals. And cartoonists can make fun of religious and political leaders.

I’m not understanding why ostensibly private institutions (on the second thought, do yeshivas receive government money?) are pressured to take actions against their members involved in disturbances. Those involved in rioting should face criminal charges, but other than that?

There should be NO koranimals in Israel. Period.

In 2005, I had a camera stolen out of my fanny pack, probably by a very short accomplice of the person trying to sell me a fold-out postcard, in the Damascus gate.

I hope the parade goes well.

The High Court does not deserve any kudos, so long as it arrogated to itself the policy decision on whether the march should go ahead. So long as it has a “heavy heart” about this decision, and purports to retain the right to ban the march on another occasion, the judicial coup in Israel continues. Israel’s deep dark secret is that its elections are a farce; the elected government does not rule the country, but rather must take the orders of its so-called “legal advisers”, who are not advisers but dictators, ruling on behalf of the self-appointed High Court. In any normal democracy the court would have dismissed the suit outright, and left it to the elected government to decide what route the march would take — and compelled the police to obey the government’s decision.