Break the internet, round 452 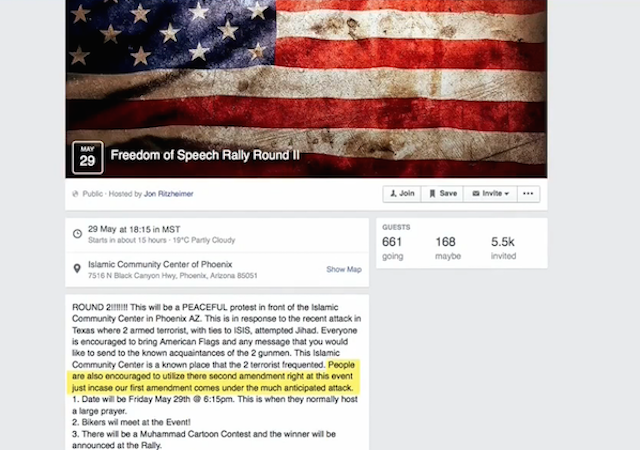 Tonight, activists plan to protest outside of the Phoenix mosque frequented by the Islamic extremists responsible for shootings at a free speech rally in Garland, Texas.

Local law enforcement officials aren’t taking any chances with this one; organizers for this protest have been less…filtered?…than those responsible for Garland’s “draw the Prophet” event, and city officials are preparing for the possibility of violence.

The protest is timed to coincide with jummah, a large communal Muslim prayer service held on Fridays.

“True Islam is terrorism,” he told the network’s Anderson Cooper. “The ones that are out committing these atrocities and stuff, they’re following the [Quran] as it’s written.”

ABC News reported Friday the Federal Bureau of Investigation warned local law enforcement there is a possibility of violence, though no specific nor credible threat.

The Arizona chapter of the Council on American-Islamic Relations said it has met with law enforcement in an effort to protect mosque-goers.

“The promise of a heavy police presence at the rally of armed biker gang members will help calm fears of harassment and even attacks on worshipers,” CAIR-AZ Chairman Imraan Siddiqi said in a release.

The Phoenix Police Department did not disclose any exact details about how they will approach protesters, but said they are prepared for the protest.

“(We) have been in contact with representatives from the mosque and known event organizers. We will have an appropriate presence at the event but specific details will not be provided,” Phoenix Police Sgt. Trent Crump said.

Reasonable minds can differ over the tactics being employed here—and oh boy, are they.

Either way, Phoenix Mayor Greg Stanton is ready to protect the free speech rights of the protesters…and the religious liberty of those worshipping at the mosque.

Mayor Greg Stanton repeatedly told CNN’s Carol Costello this morning that he’s going to do all he can to make sure the First Amendment rights of the protesters are protected, and police will be there to stop any potential violence.

But at the same time, he said, “just because someone has a First Amendment right to do something doesn’t make it a good idea.” Stanton believes this is “being done in a purposefully provocative way” and would rather not see it happen. But at long as it does, he’ll make sure it’s protected.

You can watch a video of the exchange here. (If I find a working embed code, I’ll add the video here.)

His candor struck me as remarkable (which may or may not be sad, depending on your world view.) In the wake of the shootings in Garland, there was a lot of back and forth online arguing about whether or not it was possible to protect free speech without necessarily supporting the speech we’re protecting. It was disappointing to see so many people missing the point that it is possible to still hold free speech as unassailable while at the same time criticizing that speech for being stupid, or hateful, or not just a good idea.

During the interview (really, go watch it) the anchor repeatedly attempts to get Stanton to lash out at the protesters, or at least say something soundbitey about their world view. He refuses to do it; instead he is honest about his misgivings about the particular speech being displayed, but rejects the idea that his misgivings should govern how he plans to protect the protesters’ right to protest.

Well goodness gracious! Who would have thought that was possible? Good job, Stanton—follow through, and I’ll order a round of applause.

Hopefully, cool tempers prevail tonight. If anything does happen, we’ll keep you updated.

“The Arizona chapter of the Council on American-Islamic Relations said it has met with law enforcement in an effort to protect mosque-goers.”

Yeah, attacks on Muslims are at an all-time high right now.

If only we had an FDR today. He would round them up and put them in camps.

In the 70’s and 80’s CAIR championed ensuring law enforcement monitored young women so they would not lose control and kill Ted Bundy or Gary Ridgeway.

They kill you, and in their eyes, they have the right to do it cuz, as a non-Muslim, you’re inferior. You protest anything they do to you, and they’re victims of Islamophobia. Only thing is, nobody’s afraid of Islam and Muslims. Everybody is sick and fed up of both.

Great. we get to see if the death threats aimed at the imams and their families get carried out. Yay. Ain’t America grand

You’re missing the point as hard as you can, aren’t you?

Great. we get to see if the death threats aimed at the blasphemers and Islamophobes and their families get carried out.

There, I fixed it.

Yah. America is grand. We don’t drag the imams out…much less their kiddies…and slaughter them for their religion. We might…and maybe SHOULD…prosecute them for some of what they incite, but that’s a very different thing.

We could be nice and treat them just like they treat Jews and Christians in Islamic countries.

I would be more worried about a false-flag operation taking place at the event. All of the groundwork seems to have been laid by the mosque.

You can always count on CAIR to be ready to step up and protect monstrous evildoers. That is why American Muslims deserted that organization in droves.

That must be the same group of Muslims who marched on Washington vociferously protesting Islamic terrorists. Totally awe inspiring march, er, except….

There were not enough Muslims enrolled in CAIR in the first place for them to be leaving in droves.

Oh, CAIR had Muslim American membership, but they lost all of it by about 2007, because they did nothing but et more and more radical.

Okay, I upvoted in ERROR.

Note to CAIR: “Heavily armed biker gangs” have just as much right to exercise their First Amendment right to protest as Muslims have to freely exercise their religion in America.

“That being said, those associated with the mosque have every right to fight to make sure the protest doesn’t interfere with their right to worship freely.”
Absolutely correct. Then again, I remember being at Carnegie Hall for a performance of the Vienna Philharmonic Orchestra, at a time when it was still all male, which NYC femi-nazis did not think proper, so during the performance they hammered on the fire exit doors, clearly audible to everyone, which of course was the intent.
And NYPD did nothing.
Depends on who’s doing the protesting, and who’s being protested, right?