With Your cold, dead hands. 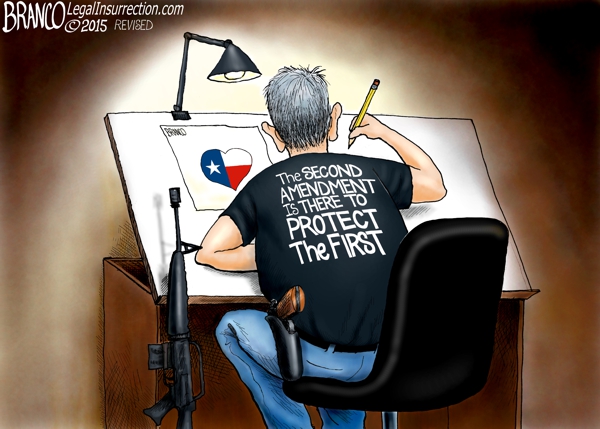 Although I agree with the sentiment of the cartoon, I would say that all the amendments have equal weight and none should take precedence or be considered of greater value, for whatever reason, than the others.

They are an inextricable part of a whole such that the removal of any one would diminish the others or that the undermining of one undermines them all.

As we have seen too clearly of late.

I wouldn’t say they all have equal weight, as when was the last time you heard of a violation of the 3d amendment?

That notwithstanding, they do all have equal force of common law upon which our nation grew and developed around.

Also, I believe there are some egregious errors in some amendments, particularly the 16th and 17th amendments, which have, in my own opinion, seriously flawed the operation of the republic.

Thankfully, the constitution itself provides an amendment process by which the document can be repaired and/or corrected, given sufficient political will. That political will, unfortunately, is quite lacking these days.

Once again, the caption to the cartoon is what gives it life and meaning. This is also true of every one of the “Mohammed” cartoons. Nobody can tell that a cartoon is about Mohammed, unless it has a label somewhere.

I agree that cartoonists have the right to draw and caption as they please, and that retaliation against them must be limited to words and drawings, not physical violence.

I would also respectfully point out that Mohammed has been dead for a very long time, and so any argument we may have, is not with him, but with people who are alive, today.

The exact same “offensive” cartoons making the exact same points can be labelled with any one or all of the Muslim Brotherhood, the state of Iran, and all their progeny, including Hamas, Al-Qaeda, Hezbollah, Boko Haram, the Daesh, and whatever the next bunch of murderous perverts chooses to call itself.

It does in fact come down to the realization that without the 2nd Amendment, the 1st Amendment would not exist. Still, to me at least, the order of these two amendments is very proper and puts the proper emphasize on each.

My only evaluation of our Bill of Rights is that the 10th Amendment has become of lesser importance because we have allowed our states to be less dominate in our lives; that’s a pity that might well harm our country, and soon too.

Wait..
He’s drawing with his right hand but he draws with his left?
What did you do Branco?

Sure didn’t notice that, it cracked me up!

Thanks for the pointer. 😉