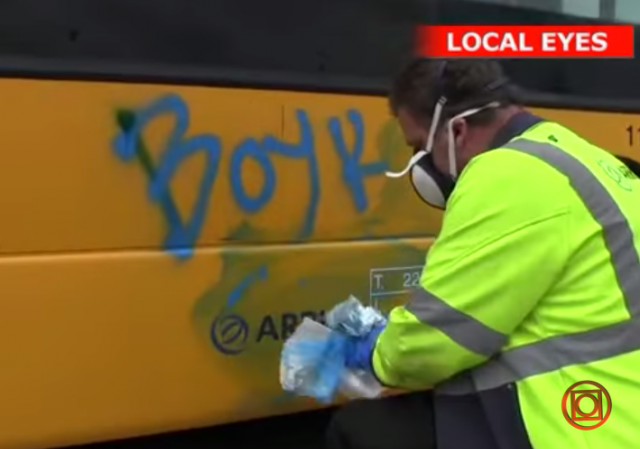 It seems that every week there are one or more news stories about anti-Israel violence in Europe, frequently tied to the Boycott, Divestment and Sanctions (BDS) movement, as with attacks in Paris.

Here is the latest episode, in which four Copenhagen buses were torched, and another painted with “Boycott Israel – Free Gaza,” in what is believed to be retaliation for the bus company removing BDS advertisements

Four public buses were burned in the early morning hours of Friday in what may have been a reaction to a controversy surrounding an advertising campaing urging people to boycott products from Israeli settlements.

Copenhagen Police suspect that there is a political motive behind the burning of four Copenhagen city buses early on Friday.

“In paint was written ‘Boycott Israel – Free Gaza’ on at least one of the buses,” police spokesman Las Vestervig told tabloid BT.

No one was injured in the fire, which was set in the bus company Arriva’s parking garage in the Copenhagen district of Østerbro.

The fire came amidst a controversy over the bus company Movia’s decision to remove advertisements from 35 buses in the capital region that urged people to boycott products from Israeli settlements.

This attack follows on the heels of a May 2 vadalism of a church where a Rabbi was to visit, as reported by The Copenhagen Post:

A church in the Copenhagen district of Nørrebro, which welcomed a rabbi to speak on Sunday, was vandalised on Saturday night.

The phrases “Free Gaza” and “Close the Death Camps” were spray-painted on the doors of the Anna Church. Bricks were also thrown through the church’s windows.

Rabbi Bent Melchior spoke at the church on Sunday to mark the 70th anniversary of Denmark’s liberation from the Nazis. He also reportedly received repeated death threats ahead of his appearance.

Copenhagen has had more than it share of anti-Semitic violence, most notably the February shooting at a Synagogue also that day at a cafe where there was an event honoring a Swedish cartoonist who had drawn images of Mohammad.)

We also have focused on the street harassment of Jews in Copenhagen by “pro-Palestinians,” such that it is dangerous to walk with any clothing or jewelry indicating one is Jewish.

Shades of South Africa. I wonder when they will start hanging the tires.

The leftists are earning their stipend. Europeans should remain wary of external and internal conspiracies to sabotage their nations. Diversity is designed to marginalize and neutralize a native population.

A tasteful piece of jewelry for the Copenhagen Jews, suitable for any occasion.

The lovely Diversity Chain that “makes us stronger.”

Of course, it’s only as strong as its weakest link–which happens to also be its strongest link to anti-Semitism.