At least one dead in shooting at free speech conference. 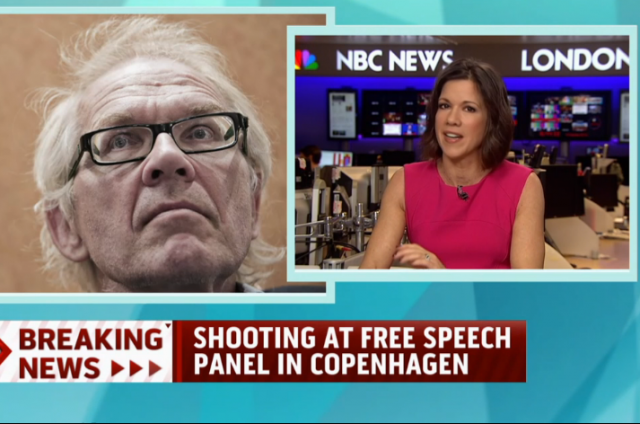 UPDATE: There has been a shooting at a Synagogue in Copenhagen:

Witness to Synagogue shooting: "It was like a movie." @SkyNews #CopenhagenShooting pic.twitter.com/0KCoWSJjBA

BREAKING: Police say one of three shooting victims outside Copenhagen synagogue has died.

The person killed at the Synagogue was a Jewish security guard:

Denmark’s chief rabbi said the Jewish victim of an attack near Copenhagen’s main synagogue on Sunday was an “irreplaceable” security guard protecting the city’s Jewish community.

Rabbi Jair Melchior said Dan Uzan, 37, was guarding a celebration at a Jewish community building near the synagogue when he was shot dead.

“He was a person who was always willing to help. An amazing, amazing guy,” said Melchior, speaking from Israel’s international airport before boarding a return flight to Copenhagen.

There are an estimated 6,000 to 7,000 Jews in Denmark, including about 2,000 active members of the Jewish community, which operates its own security patrol that coordinates with police to protect Jewish institutions.

The Shooter in both incidents was killed by police overnight:

PRIOR COVERAGE REGARDING CAFE SHOOTING:

Shots were fired Saturday at a cafe in Copenhagen as it hosted a freedom of speech event organized by Swedish artist Lars Vilks, who has faced numerous threats for caricaturing the Prophet Muhammad. Danish police say one man was killed.

In a statement, Danish police say they are looking for the perpetrators who drove away in a dark Volkswagen Polo after the shooting shortly before 4 p.m. (1500 GMT, 10 a.m. EST) at the Krudttoenden cafe.

The police said the victim was a 40-year-old man.

Gunmen stormed a Copenhagen building Saturday where controversial cartoonist Lars Vilks and his supporters had gathered, killing one man and wounding three police officers before driving away from the scene, police and witnesses said.

Helle Merete Brix — the founder of the Lars Vilks Committee, created two years ago in support of the Swedish cartoonist whose portrayals of the Prophet Mohammed angered many in the Muslim world — told CNN that security on site moved her and others to safe areas once they realized a shooting had taken place.

She and Vilks ended up in a storage room together, holding hands, until police told them it was OK to come out.

“We have never taken any chances,” Brix said, pointing to the heavy security from police, Danish intelligence services and Vilks’ own security guards at this and other committee events. “What we have so much been frightened would happen happened tonight.”

The attackers fled the scene in a dark Volkswagen Polo, according to Copenhagen police.

The French Ambassador apparently was in the event when the shooting took place:

Still alive in the room

A witness says he heard multiple gun shots and someone yelling in an "Arabic language." Watch: http://t.co/ovIXxVrlu4 #CopenhagenShooting

Lone wolves. Nothing to do with Islam. Move along now.

Thanks William: ‘At Least One Dead in Attack on ‘Freedom of Speech’ Event at Krudttønden Cafe in Copenhagen, Denmark (VIDEO)’.

Sometimes free speech isn’t free. There are times when people have to pay a heavy price to keep it free.

The White House has learned its lesson.

Now that they’ve verified this is not a kosher cafe, they are calling it random violence.

It is entirely legitimate for the American people to be deeply concerned when you’ve got a bunch of violent, vicious zealots who behead people or randomly shoot a bunch of folks in a cafe in Copenhagen.
—

Totally random. And Pres. Selfie-Stuck doesn’t even understand the origin of the word “zealot”. Or, if he does…that’s even worse.

Obama and President Jarrett understand it perfectly. It just so happens the ‘zealots’ are on their side – not America’s.

We have a traitor in the White House. How about everyone waking up to THAT?

This has been followed up now by an attack sort of connected to a synagogue.

This is an almost exact repeat of what happened in Paris, and in the same order.

It looks like somebody was trying to imitate that.

Wake up Europe, Radical Islamist want to kill you. If you’re waiting for Obama to come to the rescue it will be a long wait. I guess you will need to wait until the next president is sworn into office in January 2017. That’s if it is a Republican. If it is Hillary the wait will be longer.

How about America wakes up? At least Europe does not have a madman as a leader in any of its nations.

I didn’t even know they had an Amish population in Denmark. Huh.

So one dead at the cafe, one dead at the synagogue.
Shooter still on the lose and police are saying to get off the streets … middle of the night there, but Saturday night Copenhagen, lots of people still around.

So now according to the Telegraph
http://www.telegraph.co.uk/news/worldnews/middleeast/israel/11414029/Danish-rabbi-criticises-Benjamin-Netanyahus-Jewish-emigration-call.html

“In response to a comment by Netanyahu Rabbi Melchior said: “Terror is not a reason to move to Israel.”
Especially when one cannot count on officialdom to guarantee one’s safety!