Your choice, not your government’s choice. 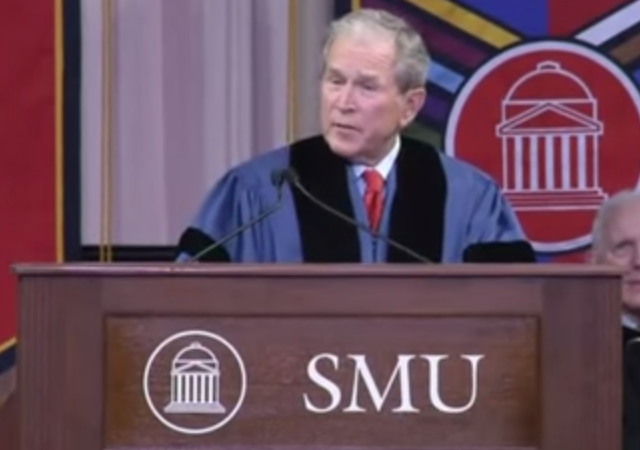 His speech was humorous at times but drew a major amount of applause when Bush touched on the subject of religious liberty. David McCabe of The Hill:

He spent some of his speech talking about why graduates should be hopeful as they move on from their college years. Towards the end, he offered one more.

“And finally, you can be hopeful because there is a loving god,” he said. “Whether you agree with that statement is your choice, it is not your government’s choice.”

“It is essential to this nation’s future that we remember that the freedom to worship who we want, and how we want — or not to worship at all — is a core belief of our founding.”

This video has that segment of the speech:

The Christian Post has more of Bush’s words on the subject:

“I believe that the Almighty’s grace and unconditional love will sustain you,” Bush told the graduates. “I believe it will bring you joy amidst the trials of life. It will enable you to better see the beauty around you. It will provide a solid foundation amidst a rapidly changing, somewhat impersonal, technologically driven world. It will show you how to love your neighbor, forgive more easily, and approach success with humility—and failure without fear.”

He added, “It will inspire you to honor your parents and eventually be a better spouse and parent yourself. It will help you fully grasp the value of life—all life. It will remind you that money, power, and fame are false idols. And I hope and believe that God’s love will inspire you to serve others.”

I thought the “Free Speech” joke was a very nice and timely dig at former Pres. Clinton who charges $500,000 for a speech.

W may be out of politics, but I think he does sometimes tells us what he thinks of the opposition.

I see here that the name “Bush” alone, means George W. Bush (Bush 43) not GHWB or Jeb. How long will that be?

I have MISSED YOU, Sir, since the afternoon of January 20, 2009. You know, when the paintings by Americans of American Greatness came off the White House West Wing Walls and were replaced by dozens of Barack Obama photos. Churchill’s bust in the Oval Office was returned to the Brits and a swell DVD of Obama speeches was generously sent to the Queen. When plans were already being laid to ABANDON the VICTORY he inherited in Iraq.

I remember when we had a president that loved his country.
Thank you, President Bush for your dedication to our constitution.