BDS movement can dish it out, but can’t take it.

The movement to boycott those who support the Boycott, Divestment and Sanctions movement is gaining steam, particularly at the legislative level.

We previously highlighted federal legislation aimed at the European boycott movement, and the apoplectic reaction, Breaking! Anti-Israel boycotters don’t like being boycotted!:

A milestone bill meant to combat international boycotts of Israel cleared a major procedural hurdle in the Illinois House this week, paving the way for the state to become among the first to divest funds from any company supporting the anti-Israel Boycott, Sanctions, and Divestment (BDS) movement.

The bill, which would force Illinois’ five state pension funds to divest from any company supporting boycotts of Israel, passed by a 10-0 vote through a key executive committee on Wednesday and is now on its way to a full vote in the state’s legislature, where it is expected to garner widespread support….

If passed, Illinois would become the first state in nation to divest from companies abroad that support Israel boycotts.

The anti-Israel movement issued urgent alerts to try to stop the legislation in committee. 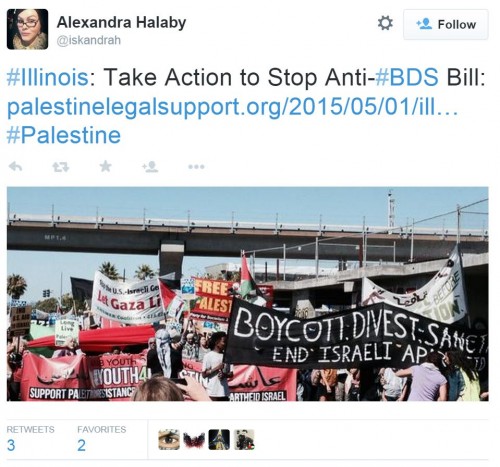 Those alerts failed to stop the legislation.

The reaction is furious from the anti-Israel boycotters, as refleected in this Op-Ed in The Chicago Sun Times with this ironic title, Illinois has no business boycotting those who boycott Israel, which starts off with a fake Gandhi quote: 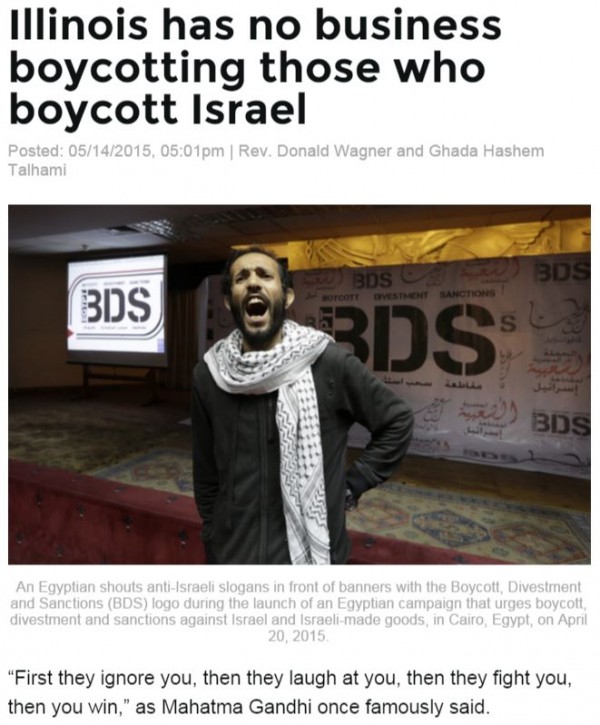 It’s almost laughable that the same people who support boycotting Israel, as well as the University of Illinois – Urbana Champaign (over the non-hiring of controversial professor Steven Salaita) scream bloody murder when the boycott is directed at the boycotters.

Expect the “Boycott the Boycotters” movement to grow.

Stockholder should be able to sue company directors who vote according to their penchant to be invited to politically correct cocktail parties. Throw’em out.

This just tickles the shit out of me.

I have been seeing LI pages get replaced by some damn garden stuff http://gogardenclub.com/

I will open an LI page and a minute later it will automatically go to that website. Only does this with LI.

Same thing is happening to me also.

“Apologies to those who get redirected to GoGardenClub. Moonbattery.com has been hacked. Technicians are working to fix it. In the meantime, hitting the back button will bring you back here.”

We are trying to figure out what the problem is.

We think we figured it out. It was Sitemeter, which we now have removed. If you experience any more problems, please post here or email me contact -at- legalinsurrection -dot- com.

Dammit, now he knows I’ve been seeing other blogs behind his back.

This happened to me on Pam Geller’s site too.

If the boycotters of the boycott will now follow up with some large doses of laughter and derision, the BDS mob will experience exploding head syndrome.

it is a sure sign of arrested development since they didn’t see this coming, are shocked at the push back to their bullying, and the ensuing laughter. Most of this is learned by second grade.

It does seem the radical Left never matures past about 19 years old. That is how they replenish themselves year in and out.