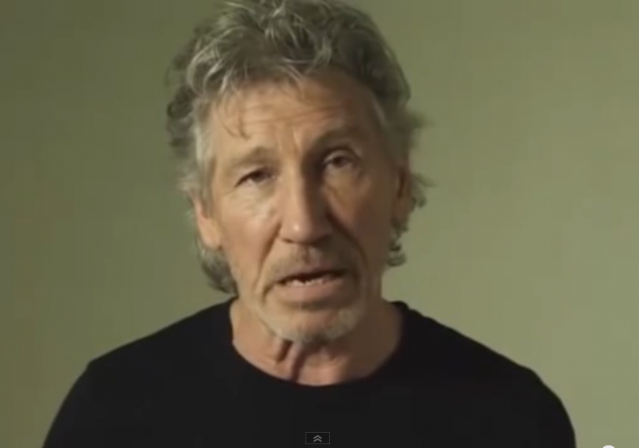 Since then, his rhetoric has gotten more and more extreme, including comparing Israelis to Nazis. He uses a giant balloon of a pig at his concerts, featuring a Jewish Star of David on its side.

Waters has lashed out at Scarlott Johansson, among others, and actively seeks to lobby other musicians and artists not to visit Israel.

On March 17, 2014, Waters wrote an “exlusive” column for Salon.com, Why I must speak out on Israel, Palestine and BDS.

In the Salon.com “exclusive,” Waters details the routine justifications, but then pulls out a supposed quote from Mahatma Gandhi to prove that Waters is on the right side of history (emphasis added):

In the furor that exists in the U.S. today about BDS and the right and wrong of a cultural boycott of Israel, a quote from one of my heroes, Mahatma Gandhi, has been on my mind. He prophetically said, “First they ignore you, then they laugh at you, then they fight you, then you win.” The BDS movement is fulfilling its promise and fits Gandhi’s description. Once dismissed by many as a futile strategy that would “never work,” BDS has gained much ground in recent weeks, bringing with it the expected backlash.

This is a common quote used by the BDS movement. The anti-Israel Mondoweiss website used it, as has a Northeastern Students for Justice in Palestine Facebook commenter and a commenter at the anti-Israel Electronic Intifada.

This student at the recent Northeastern University anti-Israel protest used it to fire up the crowd:

The only problem is that it’s a fake quote.

All available evidence is that Gandhi never said it, as The Christian Science Monitor noted in 2011, Political misquotes: The 10 most famous things never actually said:

This line is probably the best summary of Gandhi’s philosophy of satyagraha as you can get in 16 words. But there’s no evidence that the Great Soul ever said this.

We don’t know where this quote came from, but it is strikingly similar to something that the trade unionist Nicholas Klein gave in a 1914 address to the Amalgamated Clothing Workers of America in Baltimore:

Here’s an image of the Nicholas Klein quote:

Even WikiQuote lists it as “Disputed.”

When it comes to BDS rhetoric, fact check everything.

My favorite of teh quotes that Gandi never said was this: “I would have been a Christian, had I never met one”.

That goes in my book of quotes that were not said by the people we ascribe them to. My working title is “Things They Should Have Said, But Didn’t…So I Don’t Care”.

When you are a post-modern, delusional, voluntary moron like Waters, you get to claim any damn thing. It is very liberating…

Well then, if Gandhi did not say then perhaps Mr. Waters ( who ever he is ) can claim it.
I like the one I came up with about “Palestinians, a people who will destroy their future to save their past.”
yep that one is all mine.

My favorite retort to this silly “Gandhi” quote is the following:

“They laughed when I said I wanted to be a stand-up comedian. Well, they are not laughing now.”

Somewhat OT – another one from the Freaked-Out Extremists category:

87% of all quotes on the Internet are bogus- Abraham Lincoln

THAT ONE is going in the book. Definitely…

That’s because he would rather people think him a fool, then open his mouth and remove all doubt.

I hope your use of “then” instead of “than” is completely intentional, as it makes the sentence hilarious.

It’s always hard to tell in the grammar-challenged world of the internet.

Forget this bozo and rely on Keith Richards for insightful deep political philosophy and tips on keeping your liver healthy.

Roger Waters, I had no idea. I can never wear my Pink Floyd teeshirt again. 🙁

Garden variety anti-Semite. He should take a look at pictures of Dachau to see where his blather leads.

Good Lord. That’s Roger Waters!
Some people age well, but it’s obvious that he is not one of them.

I saw Rogers in concert in Atlanta maybe eight or nine years ago. What a loathsome person he was. He floated the Pink Floyd pig around the stadium and had a dotted line across the throat of it with a sign that said Kill Bush. That after he lectured the audience on peace and love for the Palestinians. A fool and a tool. Like so many in the entertainment industry.

now we know the rest of the story . Gilmore can’t stand Waters anymore . Drug intake caught up with him in later life ! Gilmore handles it much better and is ‘Pink Floyd’ to me ! What guitar

Unfortunately David Gilmour (you ought to take a look at what he looks like nowadays) is also one of the advocates of boycotting Israel.

Maybe Waters and Natalie Maines should hook up.

Any kids they had would be Waters-Maines.

Where does this [email protected] come from? Seriously, who told him? What is it that he thinks justifies his awful actions, and who gave him the information?

You can lead Waters to the truth. But you can’t make him think.

Too many drugs but great music. I think the wall has him behind the times.

A good example of why you shouldn’t do drugs.

so sorry , totally disagree . That would little barrys total Cabinet on the drugs !

R. Emmett Tyrrell, Jr. the founder of the American Spectator in his book “The Death of Liberalism” (2011)in a Chapter titled “The Infantile Left And the Stealth Socialist” writes about the use of Gandhi to promote leftists causes:

“Another source of inspiration for the Infantile Leftists has been Mohandas Gandhi. Practically every one of them honors him as the Great Soul, though he is often pictured walking through the Indian dust, clad in an old sheet, a stick in his outstretched hand. Senator Kerry asks the Egyptians crowds demonstrating against Hosni Mubarak to apply the principles of Gandhi to their movement and those of Marti Luther King Jr. Yet, of course, Gandhi was a crank and one of the greatest self-promoters ever known. In fact, after considering all the aforementioned collegiate promoters (i.e., Coat-and-Tie Radicals from the ’60s ala Bill Clinton, John Kerry, et al (JAJ note)), it is Gandhi who embodies every one of their unseemly traits along with a few of his own.”

“He (Gandhi) was sexually bizarre, politically incompetent, and a zealous faddist. He advise the Jews and Czechs to adopt nonviolence toward Hitler, claiming that “a s ingle Jew standing up and refusing to bow to Hitler’s decrees” would “melt Hitler’s heart.” He was a racist, at least toward the blacks of South Africa complaining about being jailed with them and making repeated claims about their laziness and nudity. His food fads…his enthusiasm for enemas…to the comely young women who chastely shared his bed” he asked “Have you had a good bowel movement this morning, sister?””

“…he was one of the greatest self-promoters of the last century, and perhaps his hustle served as a model for the younger Infantile Leftists…Gandhi, the Coat-and-Tie Radicals, and, later the Infantile Leftists – they simply knew how to put on a good show for the twentieth century newsrooms…as did Rousseau and Marx in their times, what buttons to push with the Kulturesmogists.”

There was a Salon article a while back (I can’t seem to find it online right now) which sought to canonize Noam Chomsky as some kind of saint – a Mother Teresa of the “Unpeopled.” The author spoke of Noam as a Gandhi, “Great Soul” figure.”

Before this, Richard Attenborough’s Gandhi movie romanticized the notion of the “Great Soul” to give the Left something to fantasize about. Attenborough, of course, left out most of the bizarre and racist details of Gandhi’s life.

Just another Brick in his brain.

That’s Roger Waters? I could swear that is one of the wino’s we see in Austin all of the time. Oh, wait….

Used to listen to Pink Floyd when I was a teenager… because my friends did.

Discovered Marillion. Never listened to Floyd again. What a bunch of clumsy junk.

[…] now, thanks to my friend over at Legal Insurrection, we see that it contains an even greater BS quotient than first […]

Gandhi always was a pious fraud and come to think of it so is Waters.

I have a word of advice for him, shut up and play