On the streets of Europe, there is no difference between anti-Zionism and anti-Semitism. 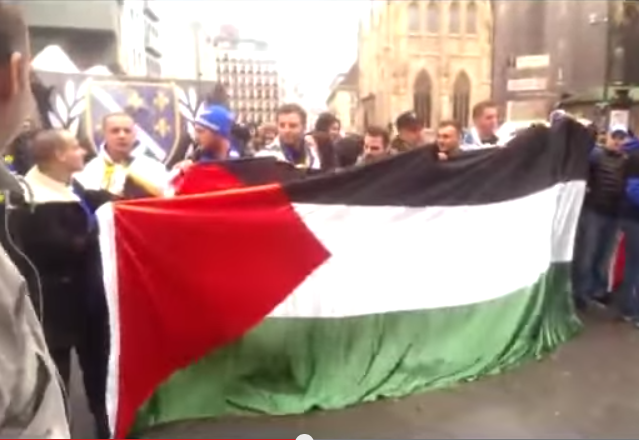 This is becoming all too common.

An anti-Israel protest, often under the banner of the Boycott, Divestment and Sanctions movement, turns outright anti-Semitic.

The gross demonization and dehumanization of Israel and Israeli Jews by the BDS movement is the mother’s milk of modern anti-Semitism.

We saw it throughout Europe in the summer of 2014, as well as in multiple U.S. cities. And we have seen anti-Zionism easily morph into blatant anti-Semitism on many campuses. It’s why in Europe Walking While Jewish is so dangerous.

And it just happened again in Vienna, Austria. The Times of Israel reports:

The Bosnian fans dressed in blue, yellow and white are seen standing among the protesters and joining them in their cries, before setting out on a chant of their own: “Ubij, ubij Židove!” or “Kill, kill the Jews!”

…. A wave of anti-Israeli and often anti-Semitic rallies hit European capitals in the summer of 2014 during the war between Israel and Hamas in the Gaza Strip. The frequent protests, ostensibly calling for an end to Israel’s actions against Palestinians, often devolved into racist demonstrations in which the mob called out anti-Semitic slogans.

That Bosnian anti-Semitic soccer fans would join with anti-Israel, “pro-Palestinian” protesters makes perfect sense. That someone who appears to be one of the original protesters would laugh as he handed a Palestinian flag to the protesters chanting “Kill, Kill the Jews,” also is no surprise. 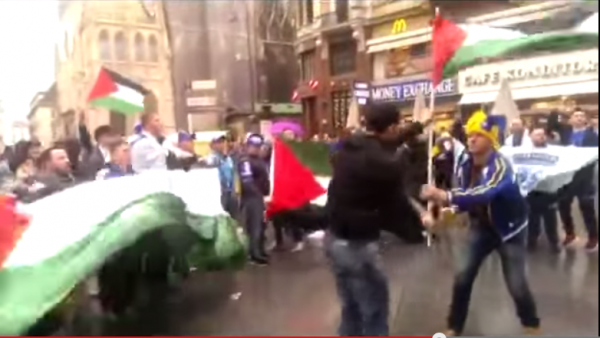 Tonight is the second night of Passover. As is written in the Passover Haggadah:

All the advanced technology and all the lawmen couldn’t put society back together again.

The progression from “free, free” to “kill, kill” is a well established process by Palestinian leadership. This started with the war of aggression against Jews in the Middle East. Continued in the second state, Jordan, with a coup against the sitting government. This is why Palestinian leadership, and by their actions, Palestinian people, are largely removed from civilized society.

Not sure if there’s a future for Jews in Europe. It might well be that Israel and the U.S. are the only two places where Jews can be free. And we’d best be careful here in the U.S. to keep it that way.

Not far outside Vienna is Mauthausen, one of those garden spots of the SS-State. Austria, the birthplace of Hitler, Kaltenbrunner and..and…and…Mozart.

Within living memory of the Holocaust, we are treated to this Jew Hatred Crap. May the slime who wish the end of Jews and Israel collectively turn on spits in Hell.

Laban the Araamen, turned on his own family member. Hitler had his birthplace destroyed, along with all records of his birth. Why? Was his grand-dad Jewish?

I never understand the hatred of Jews, but I have seen it, we all have. It is a perennial growth. Abraham left his father’s household, for reason. But still, he sent back to that family to find a wive for Isaac. And there she was — Rebeeca. Are there always a few very righteous individuals even in the families of the hardest enemies of Israel?

The hatred of Jews and Christians is spawned from the pit of hell, which inspired and spawned their devilish religion.

The last 30 days of hellishness from the followers of Mohammed are the same as the centuries beforehand, same old vile atrocities and barbarism:
http://www.thereligionofpeace.com/index.html#Attacks

25,497 documented Islamic/Mohammedan terrorist jihad attacks since 9/11/01 – the evil beasts will certainly top 25,500 before Easter day is over.

I have long pondered it, too, bvw. Part of the reason is the injustice of it; the other part is that Christianity is a branch of Judaism. If you kill Jews, what will you do with Christians? The answer is to be found in the saying of the Muslims occupying Judea, Samaria, and Gaza: Saturday people first, then Sunday people. No, it’s not a celebration of us.

The Jew-hatred is totally senseless. One can’t help thinking that it is connected to the slaughter of the innocents. And a voice was heard in Ramah; Rachel weeping and would not be comforted because they were not. It is essentially demonic.

Kill the Jew. Why? Who has contributed more to human civilization? Nobody. Kill the Jew. Why? What act of God accomplished through human history is Satan, the prince of the powers of the air, seeking futilely to prevent? Kill the Jew? God must have some grand plan for us and the only way to stymie it is to eradicate the people of the promise.

The Bosnians are most likely Muslim, so naturally they want to kill Jews.

If they weren’t Moslem, or lapsed Moslems, they wouldn’t be called Bosnians.

In Bosnia, they all spoke the same language.

If they were Catholic, they were Croats, and if they were Greek (Serbian) Orthodox, they were Serbs. Only the people who were left over were “Bosnians.”

Barbarians within the gates…