The Majority is Working (?)

The Majority is Working (?) 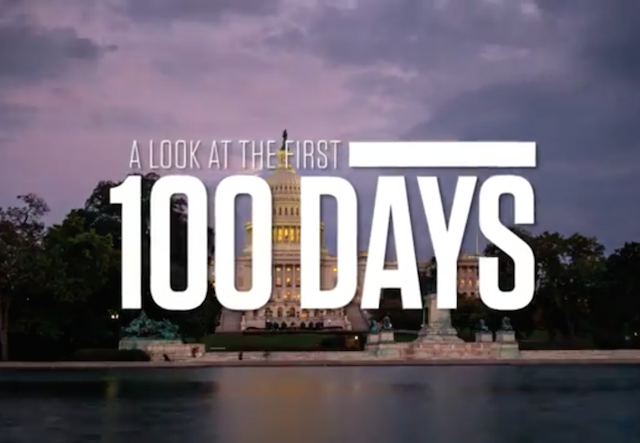 This week, the Senate recognized the passing of the first 100 days of the new majority Congress. We’ve covered the good, the bad, and the ugly here at Legal Insurrection (read it here).

The Senate has hit a lot of high points. In addition to passing an actual budget, they passed the hotly-contested Keystone XL pipeline approval, advanced bipartisan trade legislation, and shined light on the plight of domestic human trafficking.

Watch the primed-for-fundraising video the NRSC produced to highlight those differences:

Of course, that’s not the whole story.

The Senate also confirmed the nomination of Loretta Lynch as Attorney General, and floated a controversial and potentially flawed oversight bill attached to the Iran nuclear “deal.” Some conservative pundits and activists still see the new majority as lacking the type of leadership it takes to fight Obama’s destructive policies; others complain about issues given priority by the leadership.

Some of that criticism is fair; some of it isn’t. What I want to know is, when it comes to the first hundred days, do you think the new majority has proven to be a success, or a failure?

Part of effective messaging is convincing the people who vote for you that, even if they disagree with a particular vote or result, you’re still the best person for the job. There’s a big difference between communicating on behalf of one legislator, and an entire caucus of them—and in this case, I think the NRSC has done a good job presenting an overall case for success on behalf of the Republican majority.

Let’s take it to the comments: when it comes to the majority as a whole, are you satisfied with the progress made in the first 100 days? Did they overlook something you think should have taken priority? And most importantly—do you think they’ll eventually handle all of the issues that make conservatives in your community tick?

Can someone explain to me how the nation is funded via a continuing resolution (CR) yet this commentary claims an actual budget was used? These two things are mutually exclusive.

The NRSC can whistle up a pipe for any money from me. Ever. Again.

So let’s see. Before the elections arguably the biggest issue was Obamacare. It’s still here.

I say the new majority, so far, isn’t looking good.

The keystone was not the wrong thing to do, but they know obama will still not approve it. It won’t hurt sitting democrats either in the next election cycle, it is old news.

Other than keystone, if these are examples of how they are working, I’d rather they don’t. I’d prefer gridlock.

Go back and revisit what the GOP leadership said they’d do if we’d just give them a Senate majority to go with the House majority.

Paints quite a picture, dunnit…???

But, Mr. Hawkins, the optics are good. Doesn’t that count for at least a “B?”

And messaging! Messaging is everything. They’ve done nothing, abandoned promises without even trying, but they messaged it well, and being stupid, I’m falling for it. Right now! As we speak!

Yes, it’s quite a good piece of filthy propaganda.

As a whole, the Republicans have shown themselves to be good Democrats.

To coin a phrase: “A pox on ALL their damn houses!”

At the end of the day, our system of “checks and balances” is way out of wack. The White House has far more power than Congress — short of an impeachment majority in the Senate.

I have far higher expectations for what Republican control of both houses of Congress will mean for the first two years of the next Republican Presidency.

Hmm. Let me compare it to my todo list for them:

Repeal O’care. No
Stop illegal amnesty. No
Don’t confirm Holder 2.0. No
Get keystone going. No
Eliminate IRS corruption. No
Rein in IRS, EPA, FCC rulemaking. No
Balance the budget. No
Fire someone, anyone in the VA. No

But hey, at least they passed a law making slavery illegal.

Another feather in the Republican Senate’s hat – is there anything they can’t do!?

U.S. Senate Roll Call Votes On the Amendment (Barrasso Amdt. No. 1147 )
To require a certification that Iran has not directly supported or carried out an act of terrorism against the United States or a United States person anywhere in the world.
YEAs 45
NAYs 54
Not Voting 1

I quit giving money to anything ‘Ican after 2006. Any such individual who calls gets a lecture of why I will never again fund any ‘Ican unless and until the party turns itself around and starts defending the Constitution. Promises aren’t good enough — I need to see results.

Ever since I cut them off finacially I’ve given them my votes, but what I’ve seen so far is pushing me toward not voting in 2016. I’d rather see the nation collapse quickly under ‘Rat rule than linger impotently. A quick collapse might provoke a rebellion to restore the Republic, and I’d like to get into the fight.