We should say, Dems relent–*finally* 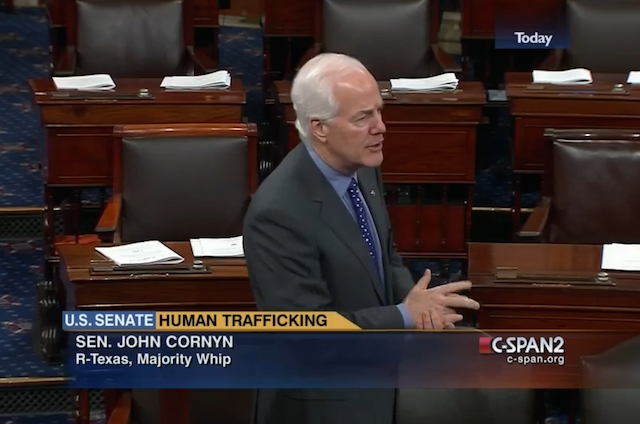 It seems incomprehensible that in 2015, I would have to write a headline hinting at begrudging support on the part of Democrats for modern day slaves. And yet here I sit, after watching more than a month’s debate over the Justice for Victims of Trafficking Act, finally able to report that the Democrats have finally relented in their all-out war against the JVTA, and we should see a vote soon.

We finally have a deal. In a battle that mostly came down to optics, Democrats have finally agreed to a fee structure benefiting victims of trafficking that would flow through the appropriations process. This system will still invoke the Hyde Amendment’s abortion funding prohibitions, but avoid the spectre of a Hyde “expansion” that Democrats used to block the bill’s passage. This means that, once the JVTA is taken care of, Majority Leader Mitch McConnell will allow a vote on the nomination of Loretta Lynch as the next attorney general.

The bizarre and infuriating part about all this is that Reid recently played games with an idea very similar to the one currently on the table—a fact that JVTA sponsor John Cornyn highlighted in a speech pushing for final passage:

“In an effort to try to get us unstuck, in order to try to catch a wave based on what we’re doing generally here in the Senate – finally being productive and making things work – I have tried to take something that virtually all Democrats have voted for previously and to put that in the provision in order to eliminate their cause for concern.”

“As I’ve told a number of our colleagues across the aisle, who believe passionately in the importance of this topic, I think this amendment that we will vote on tomorrow addresses their stated concerns. It certainly addresses the stated concerns of the Democratic Leader this morning. And I would just say that of all the Senators who agreed to cosponsor this legislation on the other side of the aisle who previously objected to voting on the bill and passing it, I would ask them please to take a close look at that provision.”

Harry Reid, hoist with his own petard.

Reid had to have seen this coming a mile away. Yesterday, he stood before the cameras and threw an actual fit over the stall on the Lynch nomination, accusing Republicans of “hijacking the process”. He even dragged New Hampshire and Jeb Bush’s apparent capitulation into the mix—a classic cornucopia of distractions. This morning on the floor, instead of putting the focus on the victims the JVTA aims to help, Reid wasted time threatening Republicans and issuing warnings to tread lightly on what Democrats believe is a make or break issue.

If it was so “make or break,” though, why are they agreeing to a compromise now, after all this time? Especially one that takes away their power to wield the Hyde Amendment like a chainsaw before the media?

Could it be it’s because they knew it was a losing argument—a lie, even—all along?

We’ll keep you updated on the JVTA and Lynch votes.

You can watch this morning’s discussion on the Senate floor here.

“It seems incomprehensible that in 2015, I would have to write a headline hinting at begrudging support on the part of Democrats for modern day slaves. And yet here I sit, after watching more than a month’s debate over the Justice for Victims of Trafficking Act, finally able to report that the Democrats have finally relented in their all-out war against the JVTA, and we should see a vote soon.”

God Amy, do you ever read your comments? I have pointed out multiple times that your rants against the Dems on this issue should also target John Cornyn himself, since he also refused to allow an amendment that would have solved this issue weeks ago.

“If it was so “make or break,” though, why are they agreeing to a compromise now, …
Could it be it’s because they knew it was a losing argument—a lie, even—all along?”

You answered this question yourself: the Dems consider fighting an expansion of the Hyde Amendment a “make or break” issue, and it was not a “lie” that the original text of the bill expanded the Hyde Amendment (it applied Hyde to non-taxpayer funds for the first time).

You are the one who is lying, Amy…

Good news: Dirty, Filthy Harry was lying about “forcing” a vote, and now appears to have caved on the human trafficking bill.

Bad news: The likely means that Lynch will see a vote on her nomination by the Outlaw In Chief.

Maybe it’s just my “Harry Reid” brand sunglasses, but I don’t see the “cave”. Both sides got something they wanted out of this compromise, the GOP got to keep the abortion restrictions, while the Dems got to block the expansion of the Hyde Amendment language to include non-taxpayer funds…

The Party Of Stupid ™ notices they’re being treated like chumps.

People have long noticed that Democrats prey upon individual dignity, and there is growing concern that their “selective-child” policy debases human life. The latter justified and rationalized with propagation of a pseudo-scientific fairytale and a notoriously selective (i.e. “pro-choice”) religion.

That said, let’s hope the not Democrats understand the implication of respecting individual dignity and acknowledging intrinsic (i.e. unearned) value. They do in principle, and they seem to in practice. Time will tell.

Making the World Safe for Slavery…..Again!

Latest update about Harry Reid injury – the story about him being beaten by his brother that was told on Power Line and by Rush Limbaugh (as possible) is a lie, or at least the person who told it says it was a lie – but the whole story contradicted some known facts about Alcoholics Anonymous and how the person realized is too pat ..

And the reason given for telling the lie is also a lie.

I think the lie was spread by Harry Reid.