Jeb Bush is more Hispanic than Elizabeth Warren is Indian

Jeb Bush is more Hispanic than Elizabeth Warren is Indian

Are all ethnic deceptions the same? 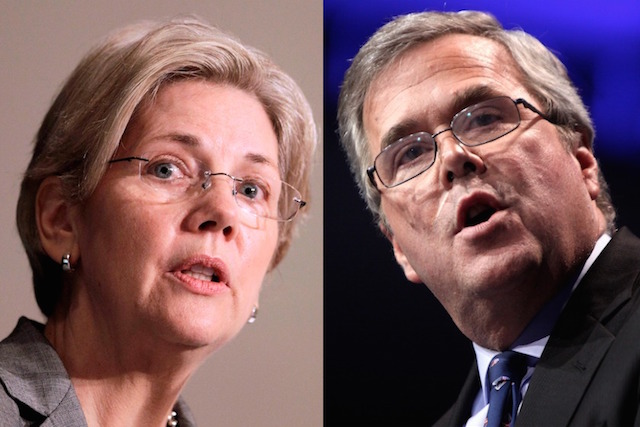 During the 2012 Massachusetts Senate race, liberals dismissed as irrelevant Elizabeth Warren’s false claim that she was Native American, because they liked her progressive politics.

Most people don’t understand, however, what Warren did.

Warren didn’t just once check a box on a meaningless form from which she stood no gain.

As detailed at ElizabethWarrenWiki.org, for years Warren listed herself as Native American on questionnaires for a law professor directory used for hiring during the mid-to-late 1980s and early 1990s, as she was climbing the law school ladder from U. Texas to U. Penn. to Harvard Law School. Warren then stopped that ethnic claim when she received a tenured position at Harvard in 1995.

While Warren claims that the law schools were not aware of her claim and it had no impact on her hiring, Warren has never authorized or directed Harvard to release its entire hiring file.

Somehow, this supposed secret that never was disclosed to Harvard prior to hiring was known to the Harvard Women’s Law Journal when Warren was a visiting professor in 1993, which listed Warren as a Woman of Color in Legal Academia. And after hiring, Harvard promptly promoted Warren as a Native American hire.  When the Boston Herald broke the story, Warren initially claimed not to know why Harvard touted her that way.

Warren excused this conduct by claiming that she either was Native American or at least thought so because of family lore.

Put aside that both the genealogy and much of the family lore have been debunked.

Fast forward. The NY Times has uncovered a 2009 voter application in which Jeb listed himself as Hispanic:

There is little doubt that Jeb Bush possesses strong credentials for appealing to Hispanic voters.

He speaks fluent Spanish. His wife, Columba Bush, was born in Mexico. For two years in his 20s, he lived in Venezuela, immersing himself in the country’s culture.

Mr. Bush, a former Florida governor and likely presidential candidate, was born in Texas and hails from one of America’s most prominent political dynasties. But on at least one occasion, it appears he got carried away with his appeal to Spanish-speaking voters and claimed he actually was Hispanic.

In a 2009 voter-registration application, obtained from the Miami-Dade County Elections Department, Mr. Bush marked Hispanic in the field labeled “race/ethnicity.”

A Bush spokeswoman could offer no explanation for the characterization. However, Mr. Bush took to Twitter late on Monday morning to call the situation a mistake. 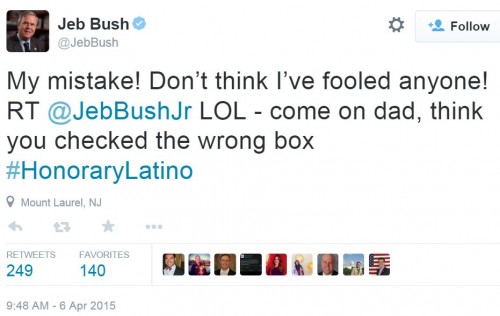 Are the situations similar?

There is no reason for Jeb to have checked that box. If you want to count that against him, I can’t defend it. But there was no possible gain from it. It’s just a voter registration card.

Warren, by contrast, stood to gain from the law directory listing, putting her in the rather small category of “Minority Law Teachers” in the 1980s as law schools desperately were seeking to diversify faculty.

Whether Warren actually gained, she tried to.

Warren also stayed as far away from Indians as anyone possibly could — except to the extent it might help hiring through the law professor directory. Jeb, by contrast, has immersed himself in Hispanic culture and language.

And there is one other very big difference.

That there was zero to be gained in listing himself as hispanic on a voter registration makes me leery. Why would a dynastic prince with a constant eye on the White House, a guy who knows what political opponents will do with such a nugget of wtf, do such a thing?

I smell a faint whiff of a possible judgment problem in this. How many other little Jeb Bush whoopsies are out there? Are the Democrat hit teams sitting on any, saving them in case he wins the GEP nomination?

Don’t know about Miami-Dade voter registration, but in most governmental demographic forms, it’s a two-part thing: first you enter ‘white’ as your race, and secondarily you enter ‘hispanic’ as your ethnicity (if such you are).

I suspect this was a moment of cheekiness rather than unknowingly checking the wrong box, he apologized immediately, and there could be no ‘profit motive’, politically speaking, so no harm, no foul.

I suspect cheekiness, too. I often tick “Other” under “Race/Ethnicity” and then decline to fill in what I mean by that. I self-identify as “American”, and if they had that I would tick it.

Yeah, I’ll often check “Other” and write in “American” if there’s a space for it.

I knew they differed depending where you are. In my work (court-ordered alc/drug treatment), I have to enter treatment compliance forms into the NC DOC and DMV computer systems. The races listed are White, Black, AmerInd, PacIslnder, Asian, whereas hispanic choices only appear as a drop-down once you’ve entered White. Hispanic choices are Cuban, Mexican, South American, European Spanish, maybe one or two more.

To enter a hispanic client, I first click White, then pick Mex, Cuban, whatever from the dropdown.

I can but refuse to handle federal clients because the paperwork is impenetrable and it takes 6-9 months to get paid. Oh, hell no. I can’t recall how the federal compliance reforms handled this. I can’t recall what I had for lunch today.

Keep that overhyped leftie’s feet to the fire! I’m already sick of her deluge of promotional FB posts.

The last time I bought a gun, I put down that I was a “Pacific Islander”.

First, I won’t be part of categorizing Americans.

It DID cause considerable consternation, I’m happy to report. Plus, I got the gun.

I checked every box on my DROS forms, but the dealer said the computer system can only handle three…so, as per usual, I did my “decline to state”.

There should only be *one* box for race – “human”.

When the Federal government demanded that people in Columbia, Maryland, choose a race for their children, or have it chosen for them by the high school administration, people did a lot of different things. We discussed mis-marking the damn forms deliberately, or refusing to answer them or marking all of the boxes.

Giving the “wrong” answer when the government does not have the right to ask a stupid question is a form of legitimate civil disobedience.

I’m not sure about Houston, but Lubbock is an island in the south pacific and I own a shave ice stand on the topless beach. I’ve never been tempted to put that on a 4473.

The latest Collectivist “deep thinking” is that both your gender and your race as strictly social constructs.

Therefore, I can be a black, single mother with transgender babies.

Just like Warren is a part-Indian champion for working people.

Anybody ever notice the default color for paper is WHITE?

NO WAY I VOTE FOR JEBBIE.

I prefer to be called “White” or even a “Cracker” rather than “Caucasian”.

Ads in most Russian newspapers in Moscow often have “No Caucasians Need Apply” and they don’t mean that they don’t like Whites.

Yeah I live in a “majority minority” area (Whites are not the majority, although there is no single minority which outnumbers Whites.
When Indian or Chinese or Viet friends say “Caucasian” I am always quick to say “We call ourselves ‘White’.” Because, we do. The whole Cauc-thing is a media creation, not what real people say in their daily lives.

He might wannabe Hispanic, but no. Can’t be born much whiter than Jebby. Poor guy is a 98 brightness.

Jeb has produced three children with his Mexican born wife Columba Garnica Gallo Bush. I’d say that makes Jeb as much Hispanic as Barack Obama is African American. Obama’s major source of contact with the black American experience after all has come via his marriage to Michelle.

This is getting hysterical.

Florida Dems want Jeb charged with a felony and are warning him to “lawyer up” over this.

Elizabeth Warren seems not to have been available for comment.
(insert that video clip here) 🙂

I favor damning Bush for this racial (ethnic?) insensitivity, but letting Liz off scot free. (which I thought was a clever Scottish ethnicity reference, but Bing says its origin is “tax free”.)

Because … “Run Lizzy Run”. Don’t we want her to challenge old Hillary? But then again, if we attack Liz, it will make the left want her even more. lol

It wasn’t designed to fool anybody, because his background is too well known to fool anything besides a computer, and this was at a time when he was out of politics, and didn’t expect to run again, because he would have hoped some other Republican would be elected in 2012.

While you might like to think he was doing his bit to sabotage the racial gerrymandering statistics, most likely it was just a mistake – he probably didn’t read over to the choice all the way on the far right, which is White, not Hispanic.

He probably just saw Hispanic, after seeing American Indian, and Pacific Islander, and Black, and figured, that’s close enough. If you don’t read to the end you might not even think that White is going to be an option.

In a lifetime of filling out forms that list his wife as a hispanic and his children as hispanics, it is entirely understandable that an automatic check on the box may have taken place.

Liz has no such excuse. Not even close.

What makes an “Hispanic” anyway? Is someone from Spain Hispanic? Is a person of Japanese ancestry who was born in and ended up President of an Hispanic country (think Fujimori of Peru) Hispanic?

Hispanic is not a race. Being Hispanic is derived from your culture. Actually with the large Hispanic influence on states like Arizona, California, New Mexico and Texas anyone raised in those states could make an argument that they are culturally Hispanic.

“Hispanic” is considered an ethnicity.

Which is still stupid, because people termed “Hispanic” often have NO ethnic common ground at all.

It’s just a pigeon-hole that gives someone the OK to pretend to represent millions of very different people.

good grief, and we still don’t know squat about Barry Soetero pre-IL senate. what a pathetic joke our ‘press’ is.