Utrecht Stadium: “Hamas, Hamas, Jews to the gas” and “Jews burn the best” 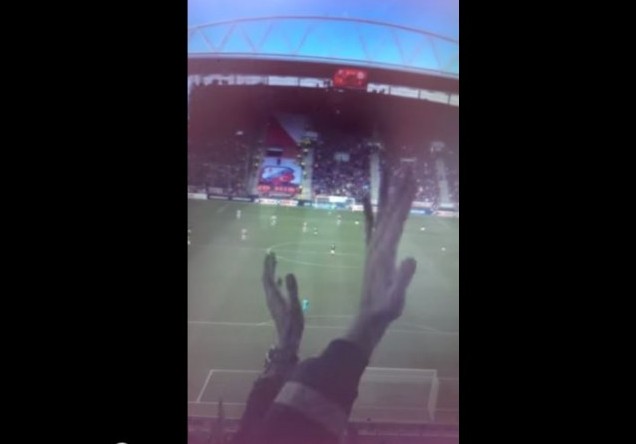 Just the other day we noted how Bosnian soccer fans in Vienna joined a “pro-Palestinian” protest, and waived Palestinian flags as the chant “Free, Free Palestine” turned into “Kill, kill the Jews.”

On the streets of Europe, and in the minds of open anti-Semites, there is no practical difference between anti-Zionism and anti-Semitism.

As similar event just happened at a Dutch soccer match, where chants of “Hamas, Hamas, Jews to the gas” were mixed in with chants praising Nazi burning of Jews.

A Dutch soccer club is working to identify fans who chanted anti-Semitic slogans about the Holocaust during a match with a rival team from Amsterdam.

The chants were documented on Sunday at Galgenwaard Stadium in Utrecht, a city situated 40 miles southeast of the Dutch capital Amsterdam, during an honor division match between Amsterdam’s Ajax team and FC Utrecht, the De Telegraaf daily reported.

Utrecht supporters chanted the slogans to insult rival fans, whom they often call “Jews” because of the historical Jewish presence in Amsterdam, which is sometimes colloquially called “Mokum” after the Yiddish word for “place.”

During the match, dozens could be seen and heard chanting: “My father was in the commandos, my mother was in the SS, together they burned Jews cause Jews burn the best” and “Hamas, Hamas, Jews to the gas.” The chanting went on for several minutes, according to The Post Online news website.

In the league game FC Utrecht Ajax last Sunday in the Galgenwaard has some of the fans of the home team a chance to show the worst side. For minutes sang these supporters Bunnik Side an anti-Semitic song that went to the bone.

The hard core was pretty proud of the text, because it’s subtitled and Monday was put on Youtube. “My dad was in the commands, my mother was in the SS. Together they burned Jews, for Jews who burn the best. “….

Also FOX reporter Mark van Rijswijk had the Sunday otherwise suffer. He said in his live commentary on the match: “The audience of Utrecht goes further back are” just at the moment the home fans’ Hamas, Hamas, Jews to the gas “, were singing.

The Foundation Fighting Antisemitism has filed charges against FC Utrecht because of the antisemitic chants sung by supporters during the match against Ajax on Sunday. The foundation wants the Public Prosecutor to criminally prosecute the football club, NU reports.

“My father was in the commando, my mother was in the SS. And together they burned Jews, because Jews burn the best”, fans chanted in the stadium Galgenwaard.

According to the foundation’s lawyer, FC Utrecht is complicit in Antisemitism as they did nothing to stop the chanting in the stadium on Sunday. “We believe that Utrecht should have called the culprits to order through the speaker, and if that did not work, the match should have been stopped in consultation of the referee.” Hans Knoop of the foundation told the newspaper. He points out that antisemitism is a criminal offense.

The chant “Hamas, Hamas, Jews to the Gas” also was heard at pro-Palestinian rallies in the summer of 2014:

This week, similar mobs gathered in Kassel, Nuremberg, Mainz, and other cities throughout Germany. The crowds are largely young, with both immigrants and native Germans, many of Middle Eastern origin. Politically they span the spectrum, from German neo-Nazis to Marxist anti-Imperialists, from secular Palestinian nationalists to Islamic fundamentalists.

We reported at the time, Pro-Palestinian Berlin mob: “Jew, Cowardly Pig, Come On Out And Fight” (Video):

Is it any wonder that the anti-Israel Boycott, Divestment and Sanctions movement has its greatest strength in Europe?

I don’t have speakers here at work, did they chant this in English or does it rhyme in Dutch as well?

Really!!!??? Does it matter? Are you really that dense? Seems to me that kill the motherfuckers doesn’t need to rhyme, and it’s meaning is pretty clear.

Please, anoNY is simply ding his job, to say really stupid things on this blog under his current moniker, anoNY. Of course, that’s not to say he doesn’t use another such nickname elsewhere. Have pity on the poor guy and don’t feed him even scrapes of put-downs; it only encourages him, the poor dunce.

I am the dunce! I am offended by the comparison! As are dunces everywhere.

I forgive the cowardly swine. They know that a couple bombs, properly placed, would flood a sizable chunk of their country. So if the Imam says scream hatred of Jews, they do.

The dutch are traditionally very tolerant and open. The muslims are wearing out there welcome at an accelerating rate. They are also hastening the end of the Eurozone and the open borders. The people will want their country back.