“You can go on your little jihad.” 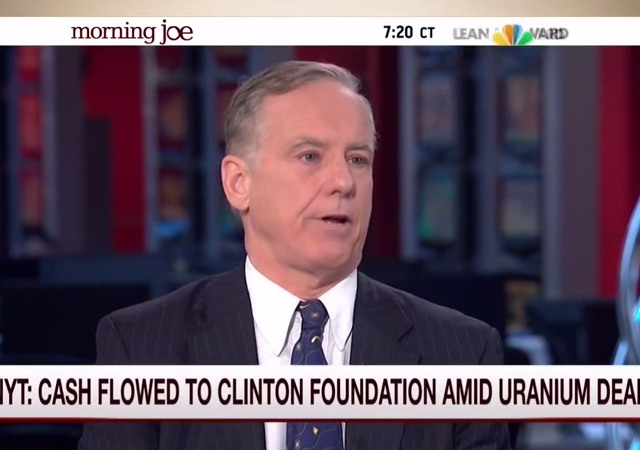 Wow. First David Brock and now Howard Dean. Is there something in the water at MSNBC?

Dean is the former chair of the DNC, a role now filled by our favorite Democrat Debbie Wasserman Schultz. As a long time party loyalist, Dean appeared on Morning Joe yesterday and attempted to downplay new scandalous revelations regarding the Clintons.

Mika Tires of Howard Dean’s ‘Jihad’ for Clintons: ‘The Facts Are The Facts’

The New York Times reported Thursday that the Clinton Global Initiative accepted millions of dollars from a Russian oil company when the State Department, then headed by Hillary Clinton, was approving a deal that would give Russians control of the company Uranium One and bring Vladimir Putin “closer to his goal of controlling much of the global uranium supply chain.” The charges are part of Peter Schweizer’s book Clinton Cash.

Dean, rather than directly address the Clintons’ latest problem, went after Schweizer for taking money from “billionaires” who “support Ted Cruz,” essentially arguing that anything his book revealed should be dismissed because of his conservative political leanings.

Yet, MSNBC’s Joe Scarborough pointed out outlets such as the New York Times and others were doing legitimate reporting off the accusations in Schweizer’s work.

Dean also recently lashed out at a New York Times reporter on this subject, calling the Times sloppy.

Dean was there to defend Hillary Clinton against charges leveled in a new book and reported out by the Times that the Clinton Global Initiative took undisclosed funds from a Russian oil company as that company was securing State Department approval for deals in the U.S. The article is part of access deals secured by the Times and others to Peter Schweizer’s Clinton Cash. Clinton surrogates have spent the past few days criticizing Schweizer as a conservative ideologue funded by right-wing Clinton opponents.

“In general New York Times has been sloppy,” Dean said. “Particularly their political writers. I use the Times as an example in journalism classes, because by the fifth paragraph in any political story…they’re substituting their judgment for news.”

Howard Dean gives the New York Times too much credit. It’s fables start from the first sentence. They do not wait until the 5th paragraph.

They’re going after her because they want a true-indigo leftist in the job and don’t think she can deliver.

They want Warren, as does the NYT. They have to get Hildebeast out by the early fall if Warren is to have a chance. So that’s what they’re doing.

Not that I mind. If Cruz, Rubio, Walker, Jebbers, Perry and Fiorina can’t beat Warren like an old rug then the republic is lost anyways.

This dust up with the Times is just part of the ongoing Democrat Party primary. It is Hillary! vs. Anybody-But-Hillary!.

The MSM/DNC axis wants every presidential election from now on to be like 2008: an Affirmative Action election in which the voters are shamed into supporting incompetent, dishonest candidates merely because of the candidate’s gender, race, sexual orientation, etc. If Hillary! is on the ticket that becomes a harder sell, since she has been around since the Jurassic and attitudes about her are pretty well set.

A substantial portion of the MSM/DNC axis prefers Elizabeth Warren, although IMO probably not a majority. This support for Fauxahontas is partly because they believe her to be a purer socialist than Hillary!, but also because she is much less well known than Hillary! and can be packaged Obama-style as a fresh face poised to do battle with a corrupt Washington (stop laughing!).

Of course, if Hillary! is the nominee you can bet that Brock, Brzezinski, Scarborough, and the rest of the Anybody-But-Hillary! faction will repent, and the Uranium Uprising will disappear down the memory hole at warp speed. Socialiam über alles!

My only wonder is whether the jump from Hillary to Warren is driven ideologically or practically, given the mounting Clinton scandals and nosediving polls.

It is for that reason billary’s corruption is bubbling up to the surface.

Yes, that’s perceptive. And they realize that Hill is a *dreadful* candidate. Everyone does.

Nonetheless, if she wins the Dem nomination the NYT will be shoulder to shoulder with other Dem organizations to push her to victory.

The hilldog will come out of the closet and reveals she’s been a lesbian all her life.
Leftists go wild and shout hallelujah in welfare offices around the country.

They could also be vetting her to get all the scandals out of the way early, the media can then say everything about Hillary is old news. They can then spend all their time tearing apart the Republican challenger.

Saw it. It was a beautiful thing to see Ole’ Howard flopping around like a landed goldfish.

I still want to hear Hillary Clinton explain the reasons why she determined that this Russian uranium deal was in the best strategic interests of the United States. No doubt her reasoning was terribly complex and nuanced, as always, but surely a brilliant woman like Hillary can boil it down to terms us dumb plebes can understand.

So go ahead Hillary (and Hillary defenders), and give us the top three reasons why this deal served U.S. interests.

Dean, rather than directly address the Clintons’ latest problem, went after Schweizer for taking money from “billionaires” who “support Ted Cruz,” essentially arguing that anything his book revealed should be dismissed because of his conservative political leanings.
———————————————-

I remember an old, old gospel song from the mountains of the Southeast…

Dean and the Collective are using the old, old, failing play-book of simple ad hominem and deflections.

It won’t work here. There is too much toxic sludge.

Mrs Clinton: I have the details here about why it was vitally important that the Russian Uranium deal must go through… Wait, Huma, can you print that e-mail chain off for the public.

Huma: I’m sorry Hillary, the e-mail is not available to Print

Mrs. Clinton: See American People, What difference does it make???!!!!

The reason for the toxic sludge is simple.

Schweitzer has done nothing more than what Woodward and Bernstein were told to do so many years ago to Nixon.

He just “followed the money.”

All this hot air from a failed Presidential candidate. The moonbattery in this one all out there for everyone to see.

The Times IS sloppy. But that doesn’t make them automatically wrong.

Sorry, I have to go there:

Clinton (and supporters) response (in a nutshell): “It depends on what the meaning of ‘facts’ is.”

This is one scandal that won’t see the panels of Doonsbury. It hits too close to home.