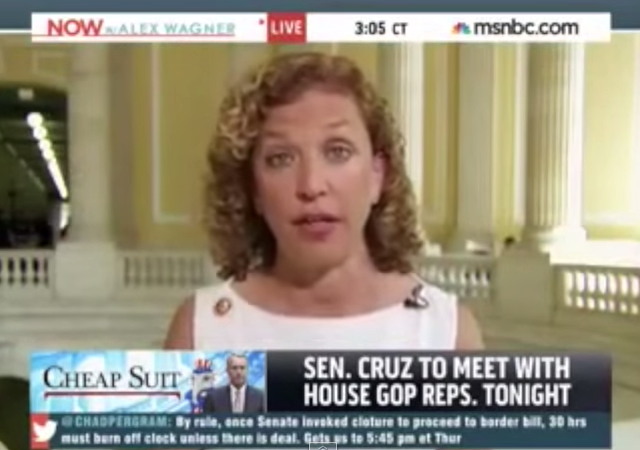 Debbie Wasserman Schultz has done such a tremendous job of defining the Democratic Party’s central beliefs lately, especially in her response to Rand Paul’s challenges on abortion.

We’re so impressed that we think Wasserman Schultz has become a possible, um, Plan B for Democrats should Hillary faulter.

As evidence for our argument, here are some of Debbie’s greatest hits.

Here she is asserting that Obama hardly does his job at all:

Waffling on with her facts all wrong:

Talking about the (non-existent) two-year anniversary celebration of Obamacare:

Another day, another DWS lie:

Explaining why God and Jerusalem as capital of Israel were put back in the Democrat platform:

OK… lets play this game. Say she does run and she runs against Cruz. What would happen?

When the dust settles, Cruz will win but with only about 52% of the vote. That means that Deb would get about 48% of the voting American public to vote for her.

That says more about the country, democrats and the media than it does about Deb and what is says is scary.

We tolerate the corrupt media that has brainwashed much of the nation (corrupt news media aside, most of us still watch leftist-Hollywood TV and go to leftist-Hollywood movies), shop at businesses supporting Al Sharpton with cash, send our children to leftist-corrupted universities we tolerate a group of corrupt, emasculated men running our political party, and we go about our day as if no military troops are pouring the cities of our nation in preparation for martial law.

That’s much more scary than the clones created by the above voting for the likes of Schultz.

But I really don’t think we need an “all idiot” presidential race.

I could see her as the veep on a PIAPS ticket. All idiot on the Dem side isn’t such a problem, other than the idiots who’d vote for them.
Her only problem is whatever she uses on her hair is liable to have her declared a Superfund site!

I’m more concerned she will run for the Senate seat that Rubio has foolishly abandoned.

She’d do a lot worse than Rick Perry.

…. But “Clinton Cash” is potentially more unsettling, both because of its focused reporting and because major news organizations including The Times, The Washington Post and Fox News have exclusive agreements with the author to pursue the story lines found in the book.

Some of these look to me like cases where the policy was made anyway, for other reasons, but she strove to cash in.

Or maybe where the wrong decision was hinted at so money would be given.

Could someone give her a bottle of shampoo? Please?

she needs a pair of heavy-duty electric shears

I wonder if anybody thought of referring to her as Debbie Wasserman Positive? (Google it)

There is certainly something toxic in the air: Linc Chaffee wants to be POTUS and Jon Corzine wants to start a hedge fund. It feels right to add DWS to the mix.

Can I get an amen?