Homeschooling is viewed as a punishment for non-compliance. 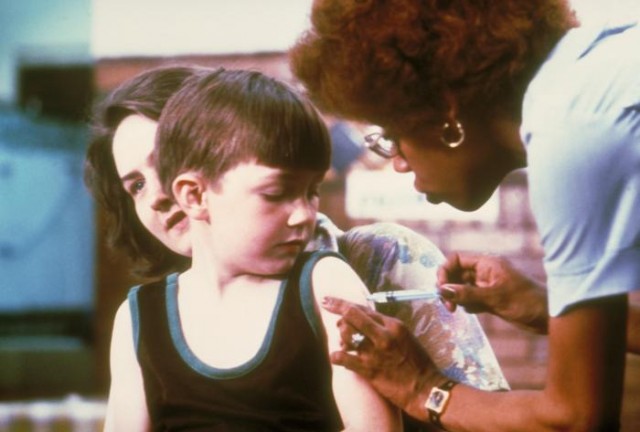 When I reported that the Disneyland measles outbreak had officially ended, I also noted that a bill mandating vaccinations for children attending public or private schools was stalled in committee.

Due to California’s recent infectious disease challenges, which also includes a substantial increase in whooping cough infections, our legislators have cleared Senate Bill 277 repealing the state’s current personal and faith-based exemptions, and allowing only vaccinated children to attend public and private schools.

Legislation aimed at reversing the state’s liberal vaccine exemption law took a major step forward Wednesday in the state Senate, only a week after support for the bill seemed to be on shaky ground.

The dramatic 7-2 vote by the Senate Education Committee surprised some Capitol observers, as one East Bay Democrat, Loni Hancock, of Berkeley, switched sides and voted yes.

If the bill becomes law, California would become the third state after Mississippi and West Virginia to slam the door on any exemptions to vaccinations except those issued for medical reasons.

Children with problems like allergies or immune suppression would remain exempt under this new proposed law.

The mind-set of the politicians creating this mandate is transparently clear in the remarks of the Chairmwoman of the committee overseeing the bill:

“The penalty for not immunizing their kids is you either have to home-school or take your kids out of public schools, and I don’t think that’s a solution to the problem,” committee Chairwoman Carol Liu (D-La Cañada Flintridge) told Pan during last week’s meeting.

Liu may be shocked to discover that more and more families are opting for homeschooling after the implementation of Common Core. In fact, a fascinating study shows that homeschooled black are more successful academically than white students attending public schools.

On the other hand, California student math and reading scores are near the bottom of the nation-wide rankings for those attending public schools.

So perhaps the threat is not the best incentive to get people to vaccinate their children?

I might suggest undoing the vaccination-autism connection that was actually promoted by the press around the same time the vaccination rates in this country dropped. For example, a new study shows that the measles-mumps-rubella vaccine has no connection to autism.

A new study of close to 100,000 children shows no link between the vaccine to prevent measles, mumps, and rubella and an increased risk of autism.

Researchers analyzed health insurance claims covering 95,727 children who had received either zero or one of the recommended two doses of the MMR vaccine over an 11-year period since 2001.

The study found “no harmful association between the receipt of the MMR vaccine and the development of an autism spectrum disorder.”

“This was true even among those children who were at an increased risk of having autism spectrum disorders by virtue of having an older sibling with ASD,” said Dr. Anjali Jain.

However, given the amount of unemployment/underemployment among our college graduatesand the fact many of the most ardent anti-vaxxers are wealthy liberals, perhaps there is a burgeoning job market for private tutors?

For every legislative action, there is an equal and opposite citizen reaction.

Leave. Now. While you still can without paying a ransom.

As a homeschooling mom, yeah, there are times when it feels like punishment. Thankfully, the rewards far outweigh the suck.

A head’s up… check out SB 322 (related to charter school expulsion, suspension and admission policies) and SB 329 (which will allow school districts and county boards of education to deny charter petitions if they would have a negative financial impact on the school district.)

“I might suggest undoing the vaccination-autism connection that was actually promoted by the press around the same time the vaccination rates in this country dropped. For example, a new study shows that the measles-mumps-rubella vaccine has no connection to autism.”

If only that would work. Sadly, anti-vaxxers seem to be immune to that sort of scientific argument (not unlike creationists, I might add).

I question the giving of those vaccine cocktails to children at such a young age. No one ever contracts multiple diseases so why are there mixtures of things in the vaccines? Immunity is a complex thing and many who believe that they have immunity won’t and those who think that immunity will last a life time for every disease agent are seeing that isn’t true either. If people are going to be forced to be immunized against all things that the state will deem necessary, the the whole truth needs to come out about the success rate of those vaccines.

You can give the vaccines individually and spread them out, or take them according to the guidelines. Question, if you want to deviate from the recommended timeline, which vaccine(s) are you going to postpone? Whooping cough (Pertussis)? Measles? Mumps? I live in San Diego, one of the primary vectors for diseases entering the US. We have seen outbreaks of measles and whooping cough in the past 2 years, along with an increase in TB cases. I’d rather vaccinate my sons than take the risk of them contracting a potentially fatal disease.

It is true that some people will not develop an immunity after receiving a vaccine and that vaccines will not last a lifetime. Both are reasons to encourage everyone to be vaccinated in childhood and to get boosters later in life.

Not ONCE in sixteen years of homeschooling, did I consider it a penalty. Indeed, I considered it an hour and a privilege. All three children were given the choice of private high school, all three chose to remain homeschooled.

“perhaps there is a burgeoning job market for private tutors?”
But of course our children, whether or not they are enrolled in schools, including some pre-schoolers, are in tutoring.

It makes no sense to me that children attending public school require vaccinations. If vaccinations are efficacious (and they are), then students who have not been vaccinated present no threat to those who have been vaccinated. There is simply no reason for all children to be vaccinated for fear of the diseases they might transmit. If you’re afraid that your children might contract a preventable disease, get your own child vaccinated. Do not demand that others do the same.

Start with the fact that at best vaccinations tend to be around 99% effective, not 100%.

“Start with the fact that at best vaccinations tend to be around 99% effective, not 100%.”
Continue with the fact that some of us, like those with compromised immune system, as stated in the post, are too weak to be immunized. Others are too young. These individuals would be hardest hit by the illnesses.

That got a thumbs up?

If your math is even close to accurate, it is horribly presented.

Provide a source that explains this better than you can.

You’re telling me 90% of the sick were vaccinated and only 10% were unvaccinated?

So you’re admitting that even with vaccination, there is no guarantee that children won’t get sick and that there are still routes of transmission. All it takes is one vaccinated child to get sick, and that child will still be capable of transmitting the disease to others who are susceptible to it, for whatever reason.

I believe in vaccination. I do not believe in government-enforced health care. Do you want a nanny state or not? If government can force parents to vaccinate their children, the next thing you know the government will demand that you buy health care!

According to the CDC vaccines are 85% to 95% effective. Found this to explain why the unvaccinated put the vaccinated at risk:

“In a high school of 1,000 students, none has ever had measles. All but 5 of the students have had two doses of measles vaccine, and so are fully immunized. The entire student body is exposed to measles, and every susceptible student becomes infected. The 5 unvaccinated students will be infected, of course. But of the 995 who have been vaccinated, we would expect several not to respond to the vaccine. The efficacy rate for two doses of measles vaccine can be higher than 99%. In this class, 7 students do not respond, and they, too, become infected. Therefore 7 of 12, or about 58%, of the cases occur in students who have been fully vaccinated.

A 2013 study reported in the Journal of Pediatrics found the following: “The prevalence of religious exemptions varies among NYS counties and increased during the past decade. Counties with higher exemption rates had higher rates of reported pertussis among exempted and vaccinated children when compared with the low-exemption counties.”

And what about contact between vaccinated and unvaccinated children in social situations outside of school – in malls, movie theaters, sporting events, birthday, pool, and holiday parties, etc.? These venues will also provide routes for transmission. Requiring vaccination for school attendance will not protect vaccinated children from the unvaccinated.

Also, they are just begging to be sued on this.

First kid that has even a recoverable adverse reaction will be some parent’s payday.

“I found no snake in the bathroom.”

is not the same as:

“There is no snake in the bathroom.”

The truth is: we don’t know the cause of autism yet. And I’m not an anti-vaxxer.

“Vaccine” conjures up the medical breakthroughs such as the smallpox vaccine and polio vaccine, which eradicated serious dread diseases.

Today, however, many vaccines are quick-fix, under-researched pharmaceutical money-making machines that are partially or wholly ineffective or worse. Some are only partly helpful against diseases that aren’t all that bad to begin with or are of low prevalence. Some have potentially toxic components. And there is a dearth of research on the effects of giving babies and little kids so many vaccines of different kinds all at one time. (Most of it is industry-funded research and there is rampant publication bias as well — and no, it’s not all about “autism”.)

Federal law protects vaccine manufacturers from liability. That there’s plenty of damage done, though, is proved by the many vaccine victim recipients of compensation from the federal compensation program. That program stands in lieu of manufacturer liability — which has the counterproductive effect of incentivizing the manufacture of more and more crap for more and more less-than-compelling reasons, as well as industry lobbying for the passage of more and more laws requiring people to subject themselves to being vaccinated for all kinds of reasons.

This has become a gravy train for the no-liability pharmaceutical companies, and thus vaccine lobbying and the astroturfing of propaganda is rampant. Please stop contributing to it.