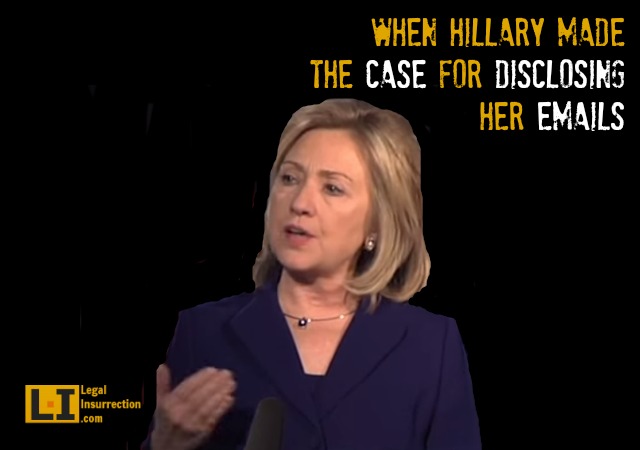 The former first lady’s situation seems to worsen by the day.

First it was revealed that Hillary had a private email account for the duration of her tenure as Secretary of State. Then it was discovered that her private email account was run through servers reportedly in her home. And no one in Obama’s administration seemed to have been aware that Mrs. Clinton was operating an extra-governmental account. Or at least that’s the current story.

When asked if they could prove with certitude that no classified information was exchanged via Hillary’s private email, the State Department replied, “that’s not a pertinent question.” Late last week, the State Department changed their story saying it was up to each Secretary to determine what was relevant and then submit that information back to the DOS for record keeping.

Email problems aren’t the only obstacle the Clinton’s must overcome ahead of a 2016 Presidential run. Former President Bill Clinton came out in defense of the Clinton Foundation yesterday, an organization that accepted donations from foreign governments like Saudi Arabia while Hillary served as Secretary of State. “I believe we’ve done more good than harm,” President Clinton said.

February 15, 2011, then Secretary Clinton spoke about Internet Freedom at the George Washington University in Washington, D.C. 2011 Hillary made a great case for why 2015 Hillary should disclose her emails to the public.

…Confidentiality is essential, especially in the Internet Age when dangerous information can be sent around the world with a click of a key stroke. But of course, governments also have a duty to be transparent. We govern with the consent of the people and that consent must be informed to be meaningful. So we must be judicious about when we close off our work to the public and we must review our standards frequently to make sure they are rigorous.

In the United States we have laws to designed to ensure that the government makes its work open to the people and the Obama administration has also launched an unprecedented initiative to put government data online, to encourage citizen participation, and to generally increase the openness of government. The U.S. government’s ability to protect America, to secure the liberties of our people, and to support the rights and freedoms of others around the world, depends on maintaining a balance between what’s public and what should and must remain out of the public domain. The scale should and will always be tipped in favor of openness, but tipping the scale over completely serves no one’s interests.

The world is indeed a dangerous place. In the interest of open government and to reassure the governed, we agree with Mrs. Clinton that in adherence to the Obama administration’s unprecedented strides towards transparency, emails that would shed light on the danger we may be facing should, in good faith, be made part of the public domain.

That was just 4 years ago. I can’t help but notice how much HRC has visibly aged in the past 4 years, really aged, more than normal, which makes me wonder about her health. Drinking ages women, especially drinking too much.

Remember, the Clintons started that whole WHDB thing.
But, of course, they would have their own servers.

Whenever the current left uses the word “unprecedented” with an extra huff of the breath, watchout as they are usually selling a serious line of BS…

I actually read what Hillary said.

There’s plenty of wiggle room for her personal staff to decide what emails should remain private. Not the State Department – her PERSONAL staff. That’s maintaining the “balance” that Hillary talked about.

She’s an incorrigible lawyer, covering her six about something that won’t come out into the public domain for four more years.

Any of her e-mails, produced as SoS, are the property of the State Dept., no matter where those mails reside and no matter what servers they were sent from, to, or through. It’s not the how or where that counts, but in what capacity the mails were generated. Her personal e-mails can remain private, but her professional e-mails don’t belong to her.

Was this before or after she hit her head?

“We govern with the consent of the people and that consent must be informed to be meaningful.”

Now THAT is what makes “hypocrisy”. As we’ve been around the barn with that concept many times, it isn’t when you actually HOLD a value and fall short of it. It’s when you SAY you hold a value that you EVIDENTLY DO NOT and NEVER DID.

It’s when you SAY, “We govern with the consent of the people and that consent must be informed to be meaningful” while breaking your back to make sure that the “people” will never be informed about anything you did that you don’t want them to know.

Yes, this is grinding hypocrisy. This is Clinton. Bill or Hill.

How many times do you have the head of a charitable organization say that?

Even the Clintons’ supporters conceded that their staff and the foreign consultants did more harm than good.

Depends on what your definition of “good” is.

Email servers are normally set up to do backups.

Where are the backups?

You remember that warehouse at the close of “Raiders Of The Lost Ark”…???

It seems Huma Adedin, Muslim Brotherhood sympathizer, supporter, and possible agent, also used this server and a private e-mail address. That means, without the oversight provided by a government e-mail system on who sends what to whom, anything could have been forwarded from that server to anyone by any user of the server with the proper access. As SoS Hils’ Deputy Chief of Staff, Abedin almost certainly had access to Hil’s mail, and could have supplied any confidential or classified information contained therein to anyone, anywhere, and nobody would have noticed.

I see this already has some attention:
http://www.dcclothesline.com/2015/03/07/hillarys-multiple-private-emails-with-her-muslim-assistant-huma-abedin-are-being-investigated-for-muslim-brotherhood-connections/