A flustered Marie Harf is grilled on Clinton’s private email

A flustered Marie Harf is grilled on Clinton’s private email 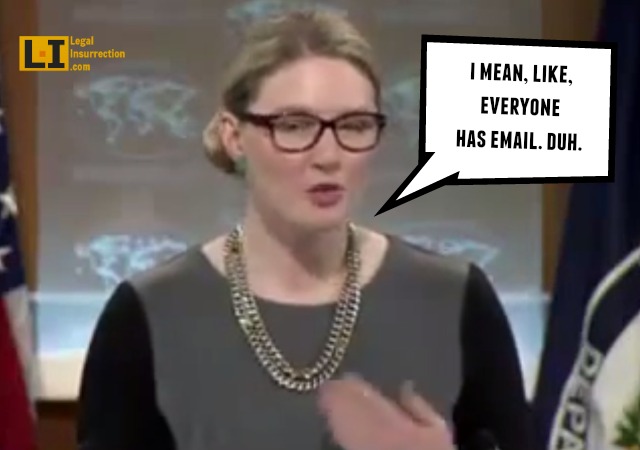 At this point, I feel sorry for Department of State spokeswoman Marie Harf. She’s always in way over her head.

Harf’s latest mess comes to us from a press conference held earlier today. Reporters asked if the Department of State could say with certitude that Clinton’s private email was never used to share classified information. DOS’s response? “It’s not really a pertinent question.”

“Do you have anything further on whether there’s going to be any kind of comprehensive review on the contents of these emails or how it is you’ve reached the decision that there is no classified information included?” asks a reporter.

“Well, obviously, and part of this is coming up because three hundred of her emails were provided to the Select Committee. Somebody obviously had to go through all fifty-five thousand pages and determine if there was anything that was deemed responsive to the Select Committee’s request. So that process for that request was undertaken. If other requests come through in the future, they will be gone through as well to see if there’s anything responsive and appropriate to be provided. She and her team has said it was not used for anything but unclassified work. You know, we don’t undergo scans of everyone’s unclassified email to make sure they’re only doing unclassified work. So I think there was any indication she was doing anything but here, so I don’t think it’s really a pertinent question,” Harf replied.

Meanwhile, the “House Select Committee on Benghazi will issue subpoenas today for emails Hillary Clinton sent regarding the U.S. consulate attack while she served as secretary of state,” the Daily Beast reports.

Another blonde attack from the idiots that are supposed to be running our foriegn policy. Perfect back stop for his earness

Marie Harf is the perfect spokeswoman for this administration.

Arrogant, dismissive, condescending, and above all, stupid and intellectually incurious enough to never think or deviate from the talking points given to her or ask for any information other than what her masters see fit giving her.

It really takes a special kind of person to deliver unbelievably stupid statements with the kind of arrogance Harf does.

You mean because just like Obama and his criministration, they’re all “Harf Arsed” (in my best English accent)?

If she had any real friends, they’d tell her that.

Maybe if she wore the rest of the sexy librarian outfit people wouldn’t pay attention to what she says.

Classified documents sent through personal email?
Isn’t that similar to what Petraes was supposed to have done?

Is there a composed version of Marie Harf?

There is no “freedom” of information when the person of interest holds “captive” the information.

Hillary broke the intent of the law, and probably the letter as well, as I see it.

If there was a movie about this farce it would be entitled, “Dumb, Dumber and Dumbest”.

Are we as a nation really ready for Hillary? Is this a joke? Are we ever going to have adults running this nation again?

They’d have to call it “Dumb Dumber and Obama-est!”

>>”At this point, I feel sorry for Department of State spokeswoman Marie Harf.”

Big mistake. Don’t ever feel sorry for these people. Revel in their humiliation. They are far worse than idiots. They would cut this country and watch it bleed.

What I came to point out. I don’t feel sorry for any of these willful idiots. Nobody forced them to turn their brains and morals off to promote these failures and their failed policies.

I agree. Like Susan Rice and John Kerry, Harf gave up any integrity she ever had just to advance her career.

You “think” they have a conscience.

That is the start of their problems.

They have “NO CONSCIENCE!”

i”Big mistake. Don’t ever feel sorry for these people. Revel in their humiliation. They are far worse than idiots. They would cut this country and watch it bleed.”

Only partial agreement here. While they would cut us they wouldn’t even bother to stand around and savor our bleeding to death. They would cut us and wander off, to wonder why we aren’t being as productive, and serving them, as we used to. They aren’t even honest psychopaths who would take pleasure in our death.

The “dumb” act is completely successful.

The press has been diverted into thinking that this is about protecting classified information. But it is not about keeping classified information from the Russians, the Persians, the Chinese, or the Norks. It is about keeping embarrassing or illegal material from the press, Congress, the FOIA, and the Vast Right-Wing Conspiracy. Congress and the FOIA can’t get information from an account they don’t know about. And when they find out about it, they can’t get messages which have been deleted. And if it’s a private server, the owner controls the backups. There will be backups somewhere not under the control of any Clinton, but it will take time to ferret them out. And time is all these guys need to steal elections.

Clintons always deny; their sycophants play dumb. The strategy has always worked before, and it’s working now. The incriminating material has been successfully hidden, and nobody’s even on the trail. For a Clinton, that’s the perfect outcome.

I don’t know why she has to defend the previous Secretary of State, especially when she has had no communicartion with her about this.

This is what happened:

John Kerry appointed all new people, who are not part of the Clinton machine.

In 2014, the law was changed, requiring a Secretary of State to exclusively use government e-mail for official business whenever possible (and if a server outageprevented that, to forward anything they sent from other account to the official e–mail)

Previously, any official business should also have been forwarded to the department.

They asked all previous Secretaryies of Satte, goping back to Madeleine Albright in 1997 (Warren Christopher 1993-7 is dead) tothe department for their records.

Hillary’;s people then were on the spot. Hillary had not forwarded any e-mail at all.

So they went through her e-mails, and PROBABLY, selected ONLY those addressed to State Department e-mail addresses (which the department would have anyway, although unorganized for retrieval)

That wa sapproximately two months ago, or maybe in November.

So they sent these extra Benghazi investigation related e-mails about two weeks ago.

And the story was leaked.

Hillary’s Clinton’s own investigation (that was only about the security suituation in Benghazi) had completely ignored anything about her role in any decisions.

Anotehr thing you need to understand:

The Clintons always prepare the copver-up BEFORE coimmitting the crime.

that wa sthe reaosn for the creation of [email protected] about one week before she was sorn in as Secretary of State.

The e-mail was mrore than secure – from anyone except Bill Clinton.

The server was in their home in Chappaqua.

And that house is guarded against inquiring citizens and members of Congress and reporters by the Secret Service. What better way to prevent public access to public records in the basement of that leaky old hovel in Chappaqua?

That is what all seasoned criminals do. They have their Alibi before committing the crime – I think.

Run out of there

I wonder if Bill used the same server for trysts with his female friends … but I digress. What would his email address on that server be … [email protected]?

There was another domain on the same server, apparently used by Bill Clinton for e-mail, and possibly a (now-defunct) web site.

Last week, a federal court upheld CA’s handgun roster with the following (according to Newsmax): “‘Plaintiffs insist they have the right to determine the precise way in which they would exercise their Second Amendment rights,’ Mueller said. The insistence upon particular handguns falls ‘outside the scope of the right to bear arms,’ she said.”

Now the administration is making value judgments on the questions being asked by the media. This is analogous to being told that we don’t have a “right to determine the precise way in which (we) would exercise (our) Second Amendment rights.” In other words, reporters no longer can determine for themselves what information is relevant and what questions they should ask; the government now presumes to make those determinations for them. In this way, journalists will be allowed to gather all the news we need to know, I’m sure. (Just as we will be allowed the guns we need, according to the government’s judgment.)

The tail is wagging the dog ever more violently lately. One of these days, the dog is going to turn around and bite it.

I am not sorry for her, at all.

She’s such a dumbshit. I can’t figure out whether she’s Lucy or Ethel.

This is your above average college graduate.

Boy are we in a world of shit.

She makes Lucy and Ethel look brilliant. I think she is running for the Lois Lerner award.

I have too much contempt for that brainless twit to feel even the least bit of sympathy for her.

Someone out there may have a clearer memory of this ..

Was is Ms. Harf, then working for the O-man’s presidential campaign, who suggested Mitt Romney sort-of murdered the wife of one of his ex-employees by evilly cancelling healthg insurance?

Nope, found that it was the other State Dept. ditz, Jen Psaki. From some outrageous super-PAC TV ad.

I guess I should sort-of say I’m sort-of sorry if anyone was randomly offended.

Straw man is fading…fading. Obfuscation coming up hard on the rail….

Correction: That Hillary Clinton was using an outside e-mail addresses (and as matter of fact she used more than one) became known to Trey Goudy Benghazi committee last summer.

That makes sense – they would have seen it as the From: address to some other people.

But what the committee didn’t know is that she never used or had any state.gov e-mail address at all.

By the way, one or more aides also used an Clintonemail.com address, at least part of the time.

I feel bad criticizing poor Ms. Harf… but not sexist. If she were a he his comments would still be incredibly naive and misguided… and I would think of him as totally out of his league.

You know what she is? She’s a stalking horse.

She’s the dumbest girl they could find who graduated from UVA in the last decade. We get all wrapped up in how incredibly inept Kerry, Harf, and her idiot boss, are, while Obama sneaks on by chuckling.

He is not stupid enough to make the same mistake twice in a row. Clinton performed the job halfway competently half the time, and as result of that way way to much heat was directed at the President himself.

Clinton has Sandy the Burglar working on vetting the e mail files. It may take a while, he can only stuff 5 to 6 hundred sheets into his pants at a time.

She just defines the phrase “mouthpiece for the administration”, and the glasses and librarian bun don’t make her look smarter. Her middle name should be “I’d be happy to check into that,” which simply means she doesn’t know anything, or won’t admit that she does, and is hoping it blows over.

Useful idiot comes to mind too….

This administration has discontinued all communications with the public. Aside of the drivel they want to put out.
But rather than shutting down the offices, which would cause them a tidal wave of problems, they put people like this up as Spokesmen.
Really, how dumb is she? I bet she is a very well compensated actor.