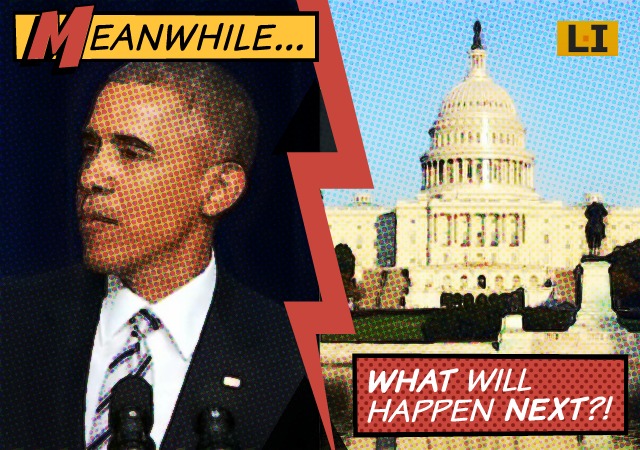 Democrats responded by mounting their high horses and leading the charge against the ‘47 Traitors.’

But that was last week.

A peek behind the curtain of political theatre reveals a different play altogether.

Yesterday, Burgess Everett of Politico reported that a dozen Senate Democrats are prepared to support legislation that could undermine the President’s Iran deal. Although, the Democrats responding to Politico wanted to make clear that THEY DO NOT SUPPORT THE GOP’s LETTER TO IRAN.

In a fabulous turn of events that could only transpire within the D.C. Beltway, that whole ’47 Traitor’ thing was revealed as nothing more than a political play; an opportunity for the administration to take bipartisan support for Congressional power and drive a wedge between Democrats and Republicans.

President Obama’s “don’t you know who I am?!” gig wasn’t a total loss though. Senate Republicans served up a chance for the President to spike the ball firmly within partisan territory. While the public relations front was a loss for Senate Republicans (just Google ‘senate’ and ‘Iran’ and enjoy the numerous headlines painting Senate Republicans as veritable Benedict Arnold doppelgangers), what comes next will likely be an even greater embarrassment for President Obama than any letter.

Obama’s Congressional sidestep is at risk of being shoved back in line by ‘traitors’ and a bevy of Democrats who agree with them. Political math indicates that 54 Republicans + 12 Democrats = veto proof majority the 60 day Congressional review mandate.

As we discussed last week, Congress has little say in the current Iran deal because the Obama administration has opted to negotiate a non-binding agreement. Non-binding agreements hold the same type of power as an executive order.

Where Corker’s bill becomes a problem for the President is that, “An executive agreement never overrides inconsistent legislation and is incapable of overriding any of the sanctions legislation,” says David Rivkin, a constitutional litigator with Baker Hostetler, LLP who served in the White House Counsel’s Office in the Reagan and George H. W. Bush Administrations. “A treaty that has been submitted for Senate’s advise and consent and if it’s self-executing could do that,” Armin Rosen of Yahoo News reported last week.

Timing is everything. The White House fears Corker’s bill will tank their deal with Iran, at least that’s what White House Chief of Staff McDonough is saying, CNN reports:

“The legislation you have introduced in the Senate goes well beyond ensuring that Congress has a role to play in any deal with Iran. Instead, the legislation would potentially prevent any deal from succeeding by suggesting that Congress must vote to ‘approve’ any deal and by removing existing sanctions waiver authorities that have already been granted to the President,” McDonough wrote.

The chief of staff said that only Congress can terminate the existing Iran sanctions that are included in laws, but the President can relax some sanctions put into place by executive order unilaterally.

One of the major issues between the U.S. and Iran is the timetable for lifting of the sanctions.

For his part, Corker on Sunday released a statement: “On this issue where Congress has played such a vital role, I believe it is very important that Congress appropriately weigh in before any final agreement is implemented.”

Just to be on the safe side, there’s also a failsafe in the works.

Another bill, proposed by Sen. Mark Kirk (R-Ill.), could also be an option if Congress begins to doubt Iran’s commitment to finalizing a deal or upholding one. Kirk’s bill would trigger sanctions if Iran walks away from talks or reneges on a deal. He said 68 senators have signaled support for it, a number he predicted would grow “once we actually vote.”

Meanwhile, back at the White House, President Obama is still refusing to come out and play.

The White House and Obama administration officials are shrugging off Congress’ still-strong bipartisan desire for weighing in on the delicate talks with Iran, and they declined to say whether the president will renew veto threats on either Iran bill after March 24. The view from Obama’s orbit: Firmly focus on making sure there’s a deal first, regardless of the speculation on Capitol Hill.

Only about 8% of the international agreements the US is involved in actually go to the Senate for approval. Ambassador John Bolton recently suggested that if the Iranian deal did not limit US Nukes – it would not need ‘advice and consent’.

Unfortunately, most of us citizens who paid attention in HS. Civics class still believe the Senate gets to weigh in on these treaties. But they usually don’t. That is why Congress is debating a bill that forces the issue in this particular case.

McCarthy is pretty much always worth a careful read.

Pres. ScamWOW and sKerry have GOT to be stopped here.

Why do I get the distinct feeling that we’re being snookered?

In a letter released Saturday, White House Chief of Staff Denis McDonough implored Senate Foreign Relations Chairman Bob Corker (R-Tenn.) not to push for a vote on his bill that would give Congress 60 days to reject or approve of any deal.

The question is: IF a deal is reached, are there enough wishy-washy RINOs in the Senate to get to 50 votes for it to pass, even if it all but guarantees that Iran will develop a nuclear weapon within 10 years?

My guess is that the answer to that question is: Yes.

If so, it would give Democrat Senators cover (because the vote would be “bipartisan”) and would nearly guarantee that the deal could not be later revoked by a future Congress, because any legislation revoking it would likely be subject to filibuster.

I don’t think it works that way. Congress only ratifies treaties. It can hold a “sense of the Senate” vote, which is like a straw poll: a beauty contest. But, just as SecState Kerry has not tired of explaining, Congress cannot approve an executive decision any more than it can reject one. There’s no reading of the Constitution which allows Congress to force something that’s not a treaty or a law to be submitted for binding approval or disapproval.

The trick is to make a deal politically untouchable in the same way as Obamacare and so on: make the consequences of breaking it seem like they’re uniquely horrible for civilization. It has nothing to do with filibusters. …Best I can tell, at least.

If you read more about the Corker bill, I think you’ll find that it is more about sanctions LAWS than “approving an executive decision”.

And THAT is certainly in the Congressional bailiwick. As things now stand, sanctions are in place that ScamWOW can loosen or lift by the simple expedient of “certifying” (i.e., LYING) that Iran is doing this or that.

Congress CAN and SHOULD tighten that up, and place NEW sanctions.

Islam doesn’t play by political/international/sovereign nation rules. Iran, its leadership in particular, is a religious entity. So, any deal Obama and Kerry ‘creates’ WILL be openly ‘obeyed’ and secretly ignored by Iran.

Iran has an a priori religious cause-conquering the world for Islam which requires, in their intolerant ‘policy’, a decimation of the Jews. Iran’s religious undertaking will not be addressed by the Obama/Jarrett tic-tac-toe foreign policy. Islamic Iran, a RELIGIOUS entity focused on world subjugation, plays by different rules.

No one except evil people wants a nuclear armed Iran.

Why WE can trust THAT.

Our Elite Leader John Kerry: The Supreme Leader has told me in hush-hush confidence that he does not want a nuclear weapon! In fact, he has even issued a self-induced fatwa against a nuclear weapon. I believe that he didn’t have his fingers crossed when The Supreme Leader said this. Now I must tell you. I have great respect for the religious importance of fatwas! (or, How I learned to stop worrying and learned to love the fatwa.).

I thought that according to our esteemed Golfer-in-Chief that the Islamic religion played no part in O’ admin’s illegal negotiations with Islamic Iran or ISIL or…name your terror sponsor or sponsoree.

And, does John Kerry have the same feeling for fatwas as say, Salman Rushdie?

Per Henry Kissenger in his book World Order, “…jihadists have a duty to transform dar al-harb, the world of unbelievers. Purity, not stability, is the guiding principle of this conception of world order.”

What this means is that Democrats told Obama that if you want our support on your secret Iran deal, we’re going to need to know the details before we stick our necks out. Clearly, many Democrats saw the deal as the bullshit it is.

Iran and Hezbollah are NOT terrorists anymore!

No worries. Be happy.

Wow. These guys are good.

Obama work out: lift little girl weights, look in the mirror and coo, “Man, you are soooooo studly”.

Obama’s goal here is to get the current UN sanctions program to fold. If that happens it won’t matter if we subsequently reinstate our sanctions because they won’t be effective if it’s just us.