The rise of anti-Semitism in Europe continues. 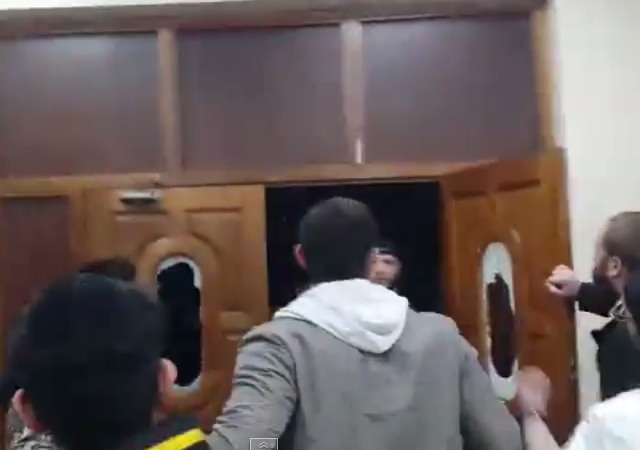 We have documented the rise of anti-Semitism throughout Europe, including the problem of Walking While Jewish, No Jew Go Zones, and the attacks on Jewish institutions, such as a Paris Synagogue.

Add another incident to the list. London police responded to an attack on a synagogue last night as a mob of drunk people smashed windows and tried to force their way inside, with shouts of “kill the Jews” heard.

A drunken mob of more than 20 thugs shouted “kill the Jews” as they stormed into a north London synagogue while young worshippers celebrated the end of the sabbath.

The anti-Semitic abuse was hurled by the group of men and women as they first beat up a young man outside before chasing him inside, breaking windows and attacking others.

Six men were arrested in London early Sunday morning after a large crowd of party revelers attacked a synagogue, breaking windows and trying to forcing their way inside

According to The Mirror tabloid, trouble started after an intoxicated gang of around 20 young men and women, who had been at a party in a nearby house, tried to enter the synagogue on Craven Park Road in the heart of London’s Stamford Hill area, home to Europe’s largest ultra-Orthodox Jewish community.

One Jewish man suffered light injuries to his face as he tried to prevent the gang from entering the premises. He was taken to a hospital for treatment.

Police received a desperate call for help at around 1:15 a.m. and a video filmed from inside the synagogue showed a small group of Jewish men trying to hold back the invaders, who screamed anti-Semitic abuse and expletives from outside and hurled objects at the doors, smashing the windows.

Part of the attack was captured on video. Language warning:

The BBC has more:

Six people have been arrested after a group forced its way into a synagogue in what police have described as an “anti-Semitic” incident.

Police said the drunk men had just left a nearby party and tried to get into the synagogue in Stamford Hill, north London, in the early hours of Sunday.

One man was punched in the face as he tried to stop them.

The six were held for public order offences and assault. Police said one man had made an anti-Semitic comment.

A Metropolitan Police spokesman said a number of people entered the synagogue on Craven Park Road, but they were removed shortly afterwards by security staff.

“The incident is being treated as an anti-Semitic incident, due to remarks made by one of the group,” said the Met spokesman.

“At this early stage, there is no suggestion that this was a far-right or extremist attack but rather the completely unacceptable actions of a drunken group.”

My grandfather had a saying: Not much good happens after midnight.

It’s already come to universities in the USA. It’s just a matter of time….

The Rabbi said he didn’t think it was an anti semitic attack. He must be terrified and feels going along and not fighting back is the safest way for his congregation. Unfortunately he’s wrong and bullies will always go after the weak.

It appears that a lot of European Jews have forgotten what has to be done if the phrase “Never Again!” is to have any meaning.

I wonder if the Rabbi believes the same group of thugs would have attacked a Mosque.

Most of the anti-Semitism in Europe is originating from mosques. This story looks like a cover for Islamic anti-Semitism (see, Europeans do it too!) by not reporting the far more prevalent Muslim outrages.

Naw, naw. Those yoots mistook the place for an AA meeting…

BDSers going to the next level? Why the immediate “far right”? I know, rhetorical question.

So. Were any of the rioters of European descent?

Question: if the people in the synagogue had attacked one of the invaders with a metal chair causing significant injury when they forced their way in, what would be the legal ramifications? If this happened in the US, how would the law treat that? Lastly, will Obama still be willing to block the UN condemnation of Israel for this clear violation of the human rights of those party-goers?

When they shouted “Kill the Jews” the Jews should have taken them at their word and shot them down before they could. However, this is in Britain where self defense is illegal.