Every bit as controlling as the Clintons. 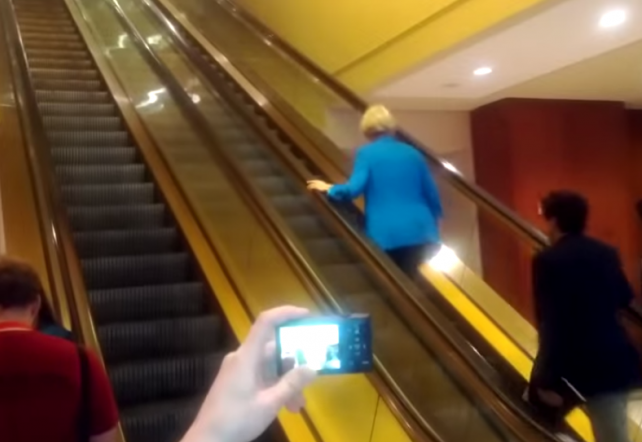 Elizabeth Warren is gaining quite the reputation for avoiding the press in public areas of the Capitol.

Now the latest, from the Hill, on how Democratic Senators are rallying around Hillary, though Warren isn’t talking and has aides run interference for her — physically (emphasis added):

Sen. Elizabeth Warren (D-Mass.), who has effectively stopped dealing personally with the press in public areas on Capitol Hill, declined to comment on the issue Wednesday. The liberal favorite walked briskly away from questions as an aide stepped in as a buffer.

We at Legal Insurrection are aware of Warren’s strategy of using bouncers and aides to block access to Warren.

At Netroots Nation in 2012, Warren used security guards to keep our Anne Sorock away from Warren, after Kos Kidz figured out who Anne was and blew the whistle.

All Anne wanted to do was ask Warren

“Do you view yourself as a role model for women of color?”

since Warren was listed as a Woman of Color in Legal Academia when she was a visiting professor at Harvard Law School in 1993:

Warren’s campaign aide then physically blocked Anne and put a clipboard in Anne’s face to stop her from filming:

The good news is that Warren seems to treat all press this way.

The bad news is she’s every bit as controlling as the Clintons.

You know what this all means, don’t you?

She just loves to show us those cheeky bones, doesn’t she!

What cheeks can you see when she’s running away from us?????

Lizzie Borden Warren for President –
She’ll Run Away From You Like Nobody Before!

I was referring to her arse of course, which seem to be the only cheeks she will move when she is confronted and asked a question.

Sounds like a Warren campaign theme, and sound bite.

Lizzie: “Come on America! It’s time you got slapped silly!
I’m gonna slap you on the cheeks – all four!

Maybe she should call it the “Warren Macarena” because it is also known as the chicken dance.

Ohhhh, that has possibilities for a really good video parody, doesn’t it!

“When I dance they call me cheeky chappy
and the boys they say that I´m loco buena
they don’t want me, they can have me
So they all run and hide behind me
move away, run away from me
and if you’re bad I take you home away

Now don´t you worry ´bout my boy friend
the boy who´s name is wacky Barry
I don´t want him, ´cause had him
he was no good so I – hahaaaa
Now, come on, what was I supposed to do ?
He was outta town and his two Swiss bank accounts were soooo fine

Living up to my pet name for her.

You might have to change that to “Princess Running Scared” before too much longer.

OK Rags, that calls for a song. I don’t know whether you remember this version, but here’s Running Bare.

How old Liz Warren? She must be way older than Hillary. Just see in the pic.

The freshman senator turns 66 come June.. She’s no ‘Spring chicken’, herself and is only 20 months younger than Old Hill’. I believe 2012 was her first attempt at running for any political office of any sort at the age of 63..

“Can’t we find some candidates that aren’t crazy people?”

Everyone is wondering how much dirt Hillary has on them. That will hold them off for now.

Hmmmm? “You didn’t build that!” By the size of Lizzie’s posterior in the going away shot, looks like she did.

What? You are discounting the dedicated work of dozens of talented pastry chefs and distillers!