Court to rule May 21 whether to dismiss Steven Salaita case

Court to rule May 21 whether to dismiss Steven Salaita case

Will American Assoc. of University Profs wait for Court ruling before deciding whether to censure U. Illinois?

The Trustees and senior officers of the University of Illinois, who are defendants in the federal lawsuit by Steven Salaita, filed a motion to dismiss the case on February 24.  Salaita, you will recall, had tweeting issues, to put it mildly.

At a court hearing today, the Judge set down a briefing schedule, with Salaita’s attorneys having until March 30 to respond, and the defendant’s attorneys until April 20 to reply.

The Court set May 21 as the date it would rule, orally in court. (Order at bottom.)

That’s a little unusual in my experience. Normally a judge would issue a written opinion on such a law-heavy motion. I can’t tell you whether to read anything into that; it could be that judge’s practice, or the judge may orally issue an order and then refer people to a written opinion.

The court did order the parties to propose a discovery plan, meaning the exchange of documents, depositions, and so on.  The submission of such plans is required under the federal and court rules. It is likely that some discovery will take place prior to the ruling on the motion to dismiss under such plan.

I can’t tell you whether the judge allowing discovery to commence reflects on the likelihood of the outcome of the motion to dismiss.

In their motion requesting that the Court order the defendants to confer on a discovery plan, Salaita’s attorneys pointed out that there is no presumption of a stay of discovery pending resolution of a motion to dismiss.  The PACER electronic docket does not reflect any opposition by the Trustees counsel having been filed as to the commencement of discovery.

If I see any reports whether the Judge expressed any view during the hearing, I’ll update.

There is significance, though, to the timing, unrelated to the lawsuit itself.

The American Association of University Professors is in the process of deciding whether to censure the University of Illinois for “firing” Salaita without giving him the benefit of procedural protections for firing a tenured professor, and a decision is expected by late May.

The university and its Trustees say — I believe correctly — that Salaita never was fired and never was tenured because he never was hired. It was a contingent offer and the contingency (Board of Trustees approval) never happened.

There never was a promise upon which Salaita reasonably could have relied that the contingency was waived, a glaring defect I immediately picked up on when initially reading the complaint, as did the defendants’ counsel in the motion to dismiss.  Whether the court agrees we will find out on May 21.

If the court rules on this contract issue in favor of the Trustees, that would take the foundation out of the AAUP censure. There are other claims in the case, including alleged violation of the First Amendment, but the “firing” without due process has been foundation of the AAUP’s consideration of censure, to the extent there has been public disclosure. 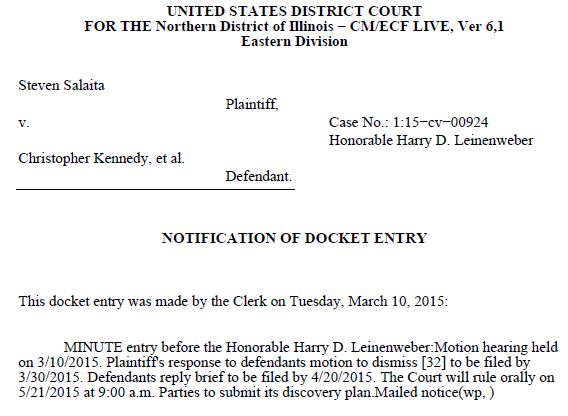 “I can’t tell you whether the judge allowing discovery to commence reflects on the likelihood of the outcome of the motion to dismiss.”

Allowing discovery during a pending motion to dismiss can short-circuit a plaintiff’s argument that discovery would (or might) have yielded evidence crucial to the plaintiff’s case. Further, this action discourages the filing of a motion to dismiss as a tactic to delay trial and run up the costs of trial, especially where there is an imbalance of funding, as there presumably is when an individual sues an institution.

If I were a judge, and looking for ways to make a likely order dismissing a political cause célèbre bombproof, that is what I would do. Then, in my opinion, I might note that plaintiff has already had discovery, and has not amended the complaint.

Of course, the case is dismissed.

Now, a few predictions: The dept’s new faculty position disappears. None of the assistant or associate prof’s in the dept’s core faculty are promoted for at least 5 years, which means at least two leave. They are not replaced.