U. Illinois: Steven Salaita non-hiring final, will not reconsider

U. Illinois: Steven Salaita non-hiring final, will not reconsider

Is court the next stop?

The University of Illinois Board of Trustees has just issued a statement that it will not reconsider its decision not to hire controversial anti-Israel activist Steven Salatia.

Salaita had a contingent offer of employment, requiring Board approval for the tenured position. That approval was denied in early September, after Salaita’s tweets raised questions as to his fitness.

The Board just announced its decision on reconsideration, via Via AP:

University of Illinois trustees say they will not reconsider a September decision to rescind a job offer to a professor over his profane, anti-Israel Twitter messages.

The trustees issued a statement Thursday that said the decision was final. A committee of university faculty had recommended that the school reconsider hiring Steven Salaita.

Salaita was offered a job teaching Native American Studies at the Urbana-Champaign campus starting last August but the offer was rescinded after he wrote the Twitter messages. Some university donors complained they were anti-Semitic. 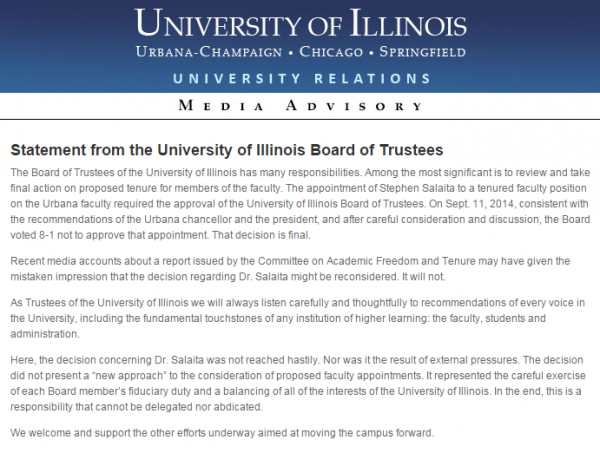 “The board made its decision in September not to hire him into a tenured faculty position. That’s not going to change,” said UI spokesman Tom Hardy.

“The decision concerning Dr. Salaita was not reached hastily. Nor was it the result of external pressures,” read the board statement. “The decision did not present a “new approach” to the consideration of proposed faculty appointments. It represented the careful exercise of each board member’s fiduciary duty and a balancing of all the interests of the University of Illinois. In the end, this is a responsibility that cannot be delegated nor abdicated.”

UI president-elect Tim Killeen told The News-Gazette after today’s board meeting he has been busy reading various reports, including the CAFT one, but deferred commenting on it, citing pending litigation.

Salaita sued the University of Illinois in November after being denied a request for public documents about the process that led to his not being hired. The UI recently filed a motion to dismiss the lawsuit. A hearing on the case will be held next month in Champaign.

Seems like this is heading to court, unless Salaita is willing to take a check. From early on the University has been willing to make a financial settlement, but according to the Gazette, Salaita and his lawyers are unresponsive:

Hardy said the university has voiced its willingness to come to a settlement of “mutually-agreeable financial terms” with Salaita, but he and his lawyers have been unresponsive, he said.

Of COURSE Court will be the next step. The Collective can’t have one of their own actually be called out and actually held accountable for his racist, anti-Semitic rantings. Why that might lead to a wholesale evaluation of the Progressive Leftist agenda in Education.

[wailing and gnashing of teeth] THINK OF THE CHILDREN WHO WILL BE DENIED EXPOSURE TO HIS PROGRESSIVE IDEAS!!! [end wailing/ gnashing].

In all seriousness, yes. This is going to end up in Court (where I hope it promptly gets laughed out of court by a Judge with a 12(b)(6)-esque motion that there is no relief to be granted. If not, I hope that UIUC doesn’t buckle just to make it go away.

It’s too much to ask though that the Leftists might actually learn not to be complete assholes from this course of events? Yeah. Probably. But one can dream….

The truly sad part is that they have already offered to buckle and write him a check, he won’t take it. He doesn’t deserve anything.

I will be honest, this whole thing has seemed a bit, well stupid to me. He was never guaranteed a job, he knew full well that the offer was contingent upon the decision of the board of trustees. So while waiting for that answer he blabs all over twitter and quits his previous job, knowing that he was under scrutiny.

Not that any of that should matter the trustees decided not to hire him, I don’t care if it was because they didn’t like his tie. As long as it wasn’t because of his race, religion and so on well then suck it up and get a job elsewhere.

Besides at this point what kind of career does he think he will have at this institution? I think in the end he will win the initial suit, but that it will be overturned upon appeal and he will come out of it with nothing but lawyer bills.

As much as they want it to, being a anti-Semite that can’t keep his pie hole shut isn’t a protected class.

Are my guesses off base?

What happened to the days of “thanks very much for your interest in the position. We’ll get back to you.”

Stupidity in the scheduling of hiring of teachers at the College and Post-Graduate level.

In rough terms, for those who are not tenured (contract teachers / professors), many, if not most, don’t know if they have a job until about 6 weeks before the semester begins. By the time they know for a fact that they don’t have a position, it’s too late for them to apply elsewhere to teach because all the positions are filled, and they lose a semester, if not a whole year, without having a position ANYWHERE.

It’s a basic failure of planning on the part of the College-Level system in the United States. No College wants to commit in advance, so they wait until they see what their enrollment looks like to fill the ‘contract’ teaching positions. That lack of commitment leads to uncertainty and insecurity on the part of the contract teachers. It’s largely why ‘tenure’ is so important: it means that the teachers don’t have to worry about the annual uncertainty of knowing if they’ll have a job the next year.

Chuck, thanks for explaining that, I had often wondered why it seemed so haphazard and why schools had classes listed with teachers TBA.

It’s only a matter of time before this guy is institutionalized — or becomes an Obama adviser or a democRat candidate somewhere.

Every time I look at that picture it simply amazes me that somebody has not bashed that moron’s face in for him yet.