Considering the deliberate mayhem and resulting accidents, getting off easy. 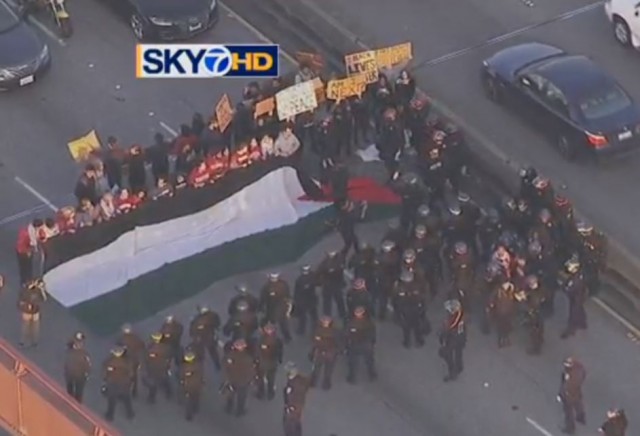 We previously reported extensively on the blockade of the San Mateo – Hayward Bridge on Martin Luther King, Jr. Day by a group of protesters.

What started as a #BlackLivesMatters protest was hijacked by anti-Israel protesters who draped the Palestinian flag across both sides of the bridge at its highest span. 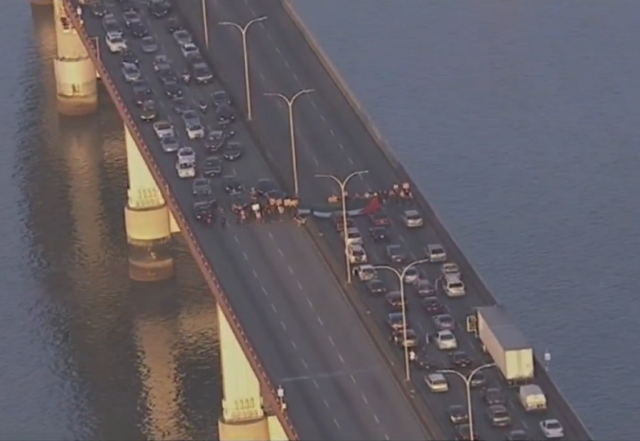 One vehicle with a 3-year-old child in medical distress reportedly had to be rerouted.

68 protesters, most of them Stanford University students, were arrested.

There was speculation that charges would be dropped, but that has not happened. As reported in the Costa Contra Times:

The first group of protesters arrested during a Martin Luther King Jr. Day action that shut down the San Mateo-Hayward Bridge have appeared in San Mateo County Superior Court in Redwood City on misdemeanor charges, according to prosecutors.

A total of 68 protestors, part of a Stanford University group calling itself Silicon Shutdown affiliated with the “Black Lives Matter” movement, were arrested after they failed to leave the bridge when ordered to do so, according to the California Highway Patrol.

The group members, who said they were honoring King’s legacy and marching in response to the controversial Aug. 9 shooting of Michael Brown, an unarmed black man, in Ferguson, Missouri, called for an end to what they called police brutality and the demilitarization of local law enforcement. They carried a Palestinian flag “as a symbol of global struggles for justice,” organizers said.

All 68 of those arrested have been charged with obstructing the roadway, a misdemeanor, and will be tried separately, in part because the county cannot accommodate all of them in one trial, District Attorney Steve Wagstaffe said Tuesday.

A total of ten of those defendants, the first ten to be arrested, appeared in court Monday and Tuesday, with others scheduled to appear on various dates in late March, Wagstaffe said.

The protesters are getting off easy. Their actions went far beyond a protest that incidentally caused traffic problems, or even a protest such as in Boston where motorists were able to exit.

Imagine being a motorist stranded hundreds of feet above the water and in need of help.

These protesters, led by national anti-Israel agitators, deliberately set up the blockade at the highest span point, knowing there was no exit possible and that emergency vehicles would have trouble reaching them to clear the roadway.

They even abandoned their cars on the roadway to create impediments.

Upon initial arrest, protesters claimed their rights were violated:

One participant in the bridge protest, Kristian Davis Bailey ’14, accused the CHP of violating protocols.

The protesters charged with a single low-level misdemeanor will continue to play victim, but in fact they were given a gift by prosecutors.

Oh, good. After they get convicted, the civil suits will be a lay-up.

I’ll bet big money that the Bay Area’s top legal talent is tripping over themselves to represent these pukes “pro bozo”.

But if they ever get in front of a jury, that’ll be a different story…

So what? There’s going to be a conviction, even for a misdemeanor. Then, the commuters can get certified as a class, and sue the pukes for false imprisonment, with the unlawful act being the misdemeanor. False imprisonment is a big money tort, in the US, because neither judges nor juries will tolerate it. There may be deep pockets to be found.

It’s clear from the string of similar events that this was a deliberately chosen, co-ordinated tactic. There must be organizations involved, and monetary support. Discovery would be a hoot.

There is precedent for this. The model is the bankrupting of the KKK. The KKK, however, never had any money. I’m not so sure about the backers for this bunch.

Maybe you do criminal work, but I don’t feel so flip about there being any convictions. Prosecutors who try misdemeanors are pretty low on the food-chain.

But if there are, this is negligence per se, which is cool. The duty and its breach are already a given, and all you really need to do is go to damages. Of course, these pukes could raise a novel defense or two.

If you’ve ever pursued a false imprisonment action, you’ve been someplace I’ve never been. And how you’d get there on a public highway with people sitting in the privacy of their cars by choice, instead of taking it on shank’s mares, seems kinda “creative” to me (which I actually like). Tenuous damages, too, I think.

It kind of depends on if this jurisdiction has a “deferred adjudication” or “Pre-Trial Diversion” program, if the District Attorneys are stupid enough to offer it as part of a plea deal and whether the voters have a long enough memory to hold the District Attorney responsible at the next election.

If I were a lawyer for ANY of these idiots, in this instance I would jump at the chance to take a Pre-Trial Diversion program (no plea necessary) to escape this with a dismissal. Deferred adjudication gets you something because there is no “conviction” at the end of it, although you still have to plead “guilty,” but that saves then from ‘per se’ liability for the mass tort claim later.

My guess is that there are going to be a LOT of unhappy insurance companies who are going to be making settlement offers in the near future. Either that, or they will be politely telling their policy holders “hey, you engaged in a criminal act, we’re not liable” and then promptly eating a “coverage lawsuit” from their OWN customers.

The really, REALLY big question I have is if the motorists will be able to reach through the protesters and attach Stanford via David Palumbo-Liu as being complicit and as such part of a “conspiracy” to commit mass false imprisonment. His Tweet regarding it being his “Ferguson class” seems to make a connection that Palumbo-Liu may have “encouraged” or otherwise aided in the direction of said protest. It may be too tenuous, but if I were a lawyer for one of the motorists, I might give it a shot just to see if I can make something stick to the wall.

1) because a conviction would help civil suits; do not bet on the charges remaining in effect.
2) the legal and political system is pro-Leftist protester of any kind, anti-Israel, anti-Semetic, and anti-anyone who was actually trying to go about their lawful affairs on that bridge. It is a guarantee that charges will be dropped.
3) when was the last time a Leftist student in California was held legally liable for their conduct?

That’s a bit too cynical even for me. I’m willing to bet that the DA’s at least stick to their cases for the purposes of a “deferred adjudication” plea.

The DA’s, while leftists, will also have an interest in “self-preservation.” Should the DA cut these idiots loose and they pull a stunt like this again, and someone is injured or killed due to the delay (especially a child), that DA, and EVERYBODY up the food chain directly to the “Elected” DA will be in a LOT of trouble before the voters, who will be screaming for the Elected DA’s head on a platter.

What would happen if some commuter decided he didn’t wan to participate and kept on going?

I would be really, really tempted to run them over.

Maybe misdemeanors are the most prosecutors felt they could get to stick considering this is California.

A slap on the wrist.

Just wait. They’ll do it again.

Move on, drivers, move on!! That they gave such consideration to these piss-ants is beyond me. 😀

It doesn’t seem like much of a leap to charge these people with felony kidnapping, if a DA wanted to be aggressive about it. Blocking a door has gotten people charges like that in domestic situations. If that kid had died, a murder charge would have been warranted.

Imagine being a motorist stranded hundreds of feet above the water and in need of help.

Don’t get the vapors. The San Mateo Bridge is almost completely a low-level bridge, maybe 15 feet above water level. There’s one high-rise to pass boat traffic, but it’s nowhere near 200 feet high (that’s the minimum your ‘hundreds of feet’ calls for).

I don’t know – That image of where the protest occurred looks pretty high above the water to me. Maybe it’s a perspective trick, but it looks to be at least 12 car-heights from the water to the bottom of the bridge.

A quick google search comes up with 135 feet at the peak of the span where this occurred.

I just don’t get all this very peculiar anti-Israel sentiment.