Stanford Univ. threatened with lawsuit, but what about suing the leaders of the protest? 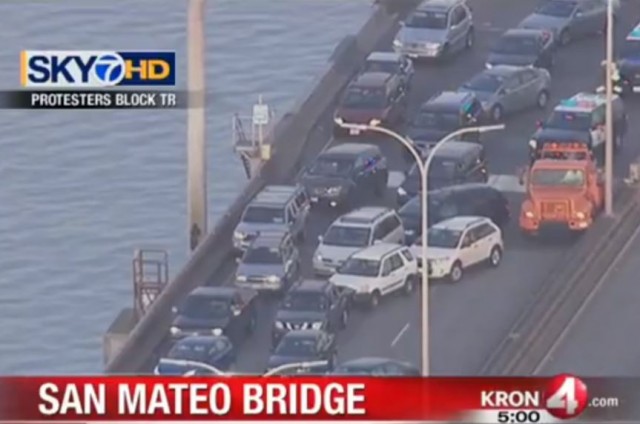 We have reported extensively on the dangerous tactic of blockading the San Mateo – Hayward Bridge, including abandoning cars and draping a Palestinian flag across the roadway at the highest span point.

Hundreds, if not thousands, of motorists were trapped on the bridge, with no way out and no way for emergency vehicles to exit.

In a recent post, I noted that this how dangerous this tactic was, and how it differed from other protest road blockages:

While the protest ostensibly was about the #BlackLivesMatter movement and Dr. Martin Luther King, Jr. Day, it was hijacked as so many such protests are by the anti-Israel contingent, just like in Ferguson and to a lesser extent in New York City during the Eric Garner protests.

Subsequent to that initial report, we have learned that it was much worse than originally thought. The tactics used were designed to cause maximum traffic disruption and mayhem, including protester cars being abandoned on the roadway, resulting in several car crashes and emergency vehicles being blocked.

The activists used a dangerous tactic of blocking both directions initially, making the scene inaccessible initially to emergency vehicles…

It’s nothing short of a miracle that there were no serious injuries and that no ambulances had to be redirected, as happened in Boston, or worse, were stuck in the traffic jam.

It turns out my fears were realized, as the parents of a three-year old girl in medical distress have threatened suit against Stanford University, whose students constituted most of the blockaders (h/t Instapundit via The College Fix).

The University received an email shortly after the Silicon Shutdown protest on Martin Luther King, Jr. Day, “expressing concern and threatening to file a lawsuit,” according to an email to The Daily from Brad Hayward, senior director of strategic communications for the University….

According to a source familiar with the content of the email, the email was written by an attorney on behalf of a family that was on the bridge at the time. A 3-year-old girl was allegedly experiencing medical distress, and the protest blocked the family’s route to the hospital.

At publication time, the University had not been served with any such lawsuit.

University spokeswoman Lisa Lapin wrote in an email to The Daily that the University had also received other complaints from motorists and the general public regarding the protest.

I hope the parents of the girl sue — but not necessarily the University, unless more direct involvement is shown. The protest leaders, need to be held accountable for what was intended to be and was easily foreseeable as creating a dangerous situation. If there is a legitimate legal basis, the leadership and students participating in this unlawful trapping

Police also need to consider more than mere violations — the motorists intentionally were unlawfully imprisoned on the bridge. This was not a protest that incidentally caused disruption and traffic, it was a protest designed to trap people with no way out high above the water.

If true that a 3-year old girl in medical distress was trapped, this needs to be taken into consideration in bringing charges.

Update: I received the following statement from Brad Hayward in response to my request for the identify of the attorney for the family and for the University’s position:

The university has not been served with any lawsuit on this subject. We received an email from a member of the public, not identifying as an attorney, shortly after the bridge protest, expressing concern and threatening to file a lawsuit. We sought to establish contact with the individual but did not hear back and have had no further communication.

The post you already have published includes my colleague Lisa Lapin’s comment on behalf of Stanford regarding the protest. We have no additional information to provide at this time. Thank you for being in touch.

All these street blocking “protests” are designed to harass thousands of people, which has a real cost to business, and adds a real stress when people are late getting home, late picking up kids, etc.

I don’t know about various torts requiring court, but fines should make up for lost tax revenue, plus punitive damages for stabbing the Zeitgeist of the city in the back.

Thousands had their hard earned evening obligations damaged. Even if they weren’t trapped on the bridge, they had to find alternative routes. Fines and time in jail should be enough to prevent future misguided attention seekers from thinking entrapping people is so totally cool.

Multiple and massive civil, and class action lawsuits will clear out those criminals pretty fast – plus dry up a lot of their “dirty” money.

If I may paraphrase one of my favorite sayings here:

Sue ’em until they glow and Restraining Order them in the dark.

People victimized by these protests need to sue the city for allowing them.

A major breakdown in our culture is the disconnect between actions and consequences of those actions. Holding people financially responsible for their actions is an important step toward restoring sanity and order in our society. I hope they go after them and win.

You have the right to be a jackass. But the moment your jackassery infringes on others’ liberty, you lose that right. To take it a step further from inconvenience to endangerment is unconscionable and criminal.

Throw the book at them.

It’s too bad they didn’t trap a pack of Hells Angels on the bridge and refuse to let them through.

Perhaps more of *us* need to cultivate a Hell’s Angels attitude towards this sort of people.

If not you, then who?
If not now, then when?

Suing Stanford makes sense from a legal point of view, and protesters being sued makes sense based on logic. The legal viewpoint trumps, because: Who has more money?

I am all for suing universities for deliberately creating a climate of hate that can lead to these kinds of violent activities. It would definitely be a case of poetic justice, since the Left always tell us hate speech is not free speech. And shouldn’t some of these administrators and professors have to answer for the crimes they have urged others to commit?

(Just in case someone thinks I am anti-education, I will point out that I teach at a Texas community college. Some of the professors and administrators I have had the misfortune to run across in my career are Hitlerian monsters who have been allowed to spread their poison under the guise of “academic freedom”. The goal of teaching our students is being lost in the rush to turn them into mindless stormtroopers for the Progressive cause.)

The trouble makers are counting on the motorists having more decency than the trouble makers. I would have inched my car forward persistently and let them decide if they want to be run over.

Being animals, with no concern for other people’s property, they would just attack your car for having the temerity to interrupt their “peaceful protest”. If you don’t mind risking damage to your vehicle, go for it.

What I don’t understand is why the drivers of the leading vehicles didn’t just slowly nudge their way through the protesters? Why did they sit so obediently and facilitate the entrapment of 1000s of others?
Everyone has a cell phone wouldn’t it have been a simple matter to get someone to use the phone to document you as you slowly drove your car through them?

There’s something wrong with the admissions process of our elite universities if rotten kids like this are getting in. I fear that admissions officers are often looking for the activist type at the expense of the studious type.

because they get charged and/or sued.
theres a lawyer joke buried there somewhere I am sure.

Fifteen years ago, high school kids would show up in the guidance department of one of the schools in the district where I taught…accompanied by their parents and an attorney for a schedule change—yes, that’s right, a schedule change. Forget helicopter parenting, I can only imagine the helicopter lawyering that goes on now.

if not in crosswalk they are legit target.
my crown vic trumps your trunk.

Unfortunately you cannot run over a pedestrian even if they are intentionally blocking the road. If it was my daughter and she was in medical distress I would take a tire iron and clear the bridge and worry about the repercussions later.

AFAICR, it’s not legal to walk across the highway, which is what they did. A slow approach, to nudge them out of the way, is not reckless, and consistent with who has the right of way on that stretch of road.

However, it being California, I I suspect they’d be allowed to drag you from your car and beat you.

Then we need to change the traffic laws so vehicles and not pedestrians have the right of way.

This needs to be considered an act of terrorism.
This is NOT freedom of speech.
If they stood on the side of the highway and held up their signs for people to see THAT would be freedom of speech.
This is very much akin to shouting “Fire!” in a crowded theater as they are endangering peoples lives and causing real harm.
And they couldn’t care less.

the only thing that would have kept me from throwing them all over the side of the bridge and driving off would have been the knowledge that my jury would likely not have been of my “peers”, but rather a collection of the idiots who have ruined #Failifornia.

since i’m uninterested in exploring prison life, and don’t look good in orange anyway, i would have had to forcibly restrain my initial instinctive response.

This has to be viewed in relation to the facts in California. The Left controls the courts. No lawsuit against the domestic terrorists and those who sponsor them will last past the first hearing. If the blockade had caused the actual loss of innocent life, not one of the terrorists or their sponsors would be charged or convicted.

They ignore the law, the very concept of law. And they are joined by those who are charged in theory with upholding that concept.

Suits and attempts at criminal charges have value as a demonstration for the general population of the futility of depending on the rule of law in Democrat controlled areas. But not as an actual tactic for opponents of the Left to effect change.

Was it a white little girl? Cause if it was, she doesn’t matter. Only #BlackLivesMatter.

Identify the organizers of the demonstrations and sue them.

How about a class action suit giving a day’s pay to everyone who was kept from a shift of work or an equivalent span of leisure time earned by a shift of work? That would be everybody who was caught up by this criminal action.