If Bibi loses, how big a celebration in the White House? If Bibi wins, how many broken dishes? 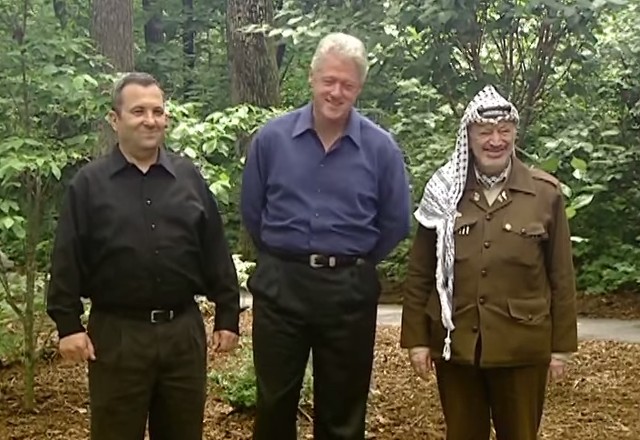 Having failed to topple Saddam Hussein or Slobodan Milosevic, Bill Clinton had to settle for Benjamin Netanyahu.

In a characteristic display of partisan glee, Clinton toasted political consultant Robert Shrum on Tuesday night (reports Lloyd Grove in The Washington Post) to congratulate him (and implicitly, the administration) for helping the Israeli opposition bring down the prime minister Washington loves to hate.

Later today, if all the votes in the Israeli election are counted and the State Department-supported anti-Netanyahu group is successful in ensuring that Netanyahu is not able to form the next government, who will President Obama be toasting?

True this is hypothetical question, but there’s a lesson in 1999, that is relevant today.

Clinton figured that once Netanyahu was out of the way he no longer had any obstacles to Middle East peace and a Nobel Peace Prize. He worked well with Ehud Barak and a year after Barak took office hosted a summit at which Barak offered a peace deal to Yasser Arafat. Arafat rejected it and two months later launched the second or Al-Aqsa intifada in which 1,100 Israelis were killed. So yes, Clinton got his wish and hundreds of Israelis paid the price.

One thing that the Bibi-bashers and Obama-acolytes never ask themselves, is “if Bibi is such an obstacle to peace why couldn’t Clinton make peace once Bibi was defeated?” The answer would be very clear that it isn’t settlements prevents peace, it’s the Palestinian unwillingness to make peace and end their war against Israel.

Even Clinton effectively admitted this when he spoke to Arafat after his term was over and blamed the Palestinian leader for the failure of the Camp David talks.

On Tuesday night, Clinton told guests at a party at the Manhattan apartment of former U.N. ambassador Richard Holbrooke and his wife, writer Kati Marton, that Arafat called to bid him farewell three days before he left office. “You are a great man,” Arafat said. “The hell I am,” Clinton said he responded. “I’m a colossal failure, and you made me one.”

Clinton said he told Arafat that by turning down the best peace deal he was ever going to get-the one proffered by Israeli Prime Minister Ehud Barak and brokered by Clinton last July-the Palestinian leader was only guaranteeing the election of the hawkish Ariel Sharon, the current Israeli leader. But Arafat didn’t listen. Sharon was elected in a landslide Feb. 6 and has gradually escalated his crackdown on the Palestinians despite a shaky ceasefire negotiated two weeks ago by CIA chief George Tenet.

Obama doesn’t seem to have learned that having the “right” Israeli Prime Minister isn’t a necessary or sufficient condition for making peace in the Middle East.

If anyone paid attention it isn’t just friends of Bibi who believe this, either. A few months ago Tzipi Livni told Roger Cohen of The New York Times that it was Palestinian Authority President Mahmoud Abbas who torpedoed the John Kerry sponsored peace talks last year. Livni teamed up with Isaac Herzog in December with the goal of unseating Netanyahu.

Deroy Murdock, observing the meddling of the Obama administration in today’s election asks Israeli voters to send Obama a message:

This development is especially maddening given Obama’s refusal to meet Netanyahu during his visit to Washington a fortnight ago. Obama claimed that he didn’t want to meddle in Israeli politics by publicly embracing America’s closest ally in the Middle East so close to tomorrow’s election. Instead, he kept his interference quiet and, as per his style, well-financed with the hard-earned cash of American taxpayers. My friend Quin Hillyer’s article sets forth some of these details and calls on Israelis to reelect Netanyahu, both to assure their own freedom, security, and prosperity and to show Obama that Israel is not a toy for him to play with and, lately, abuse at his whim.

We’ll know later today if Obama will party like it was 1999 or if he was sent a message.

For live updates please check Legal Insurrection throughout the day.

Clinton did establish a Muslim state in Europe with overt and covert causes. Perhaps Obama will settle for a similar separation and divestment of people and land.