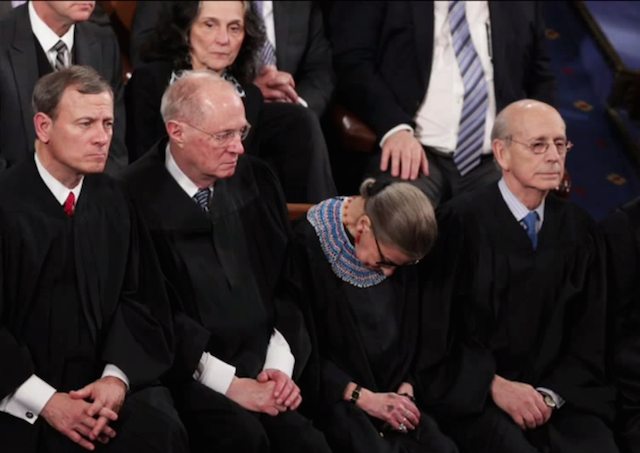 We’ve already talked about how Supreme Court Justice Ruth Bader Ginsburg stole the show at this year’s State of the Union address—mostly because the entire internet was 90% sure they caught her during the action:

As it turns out, she wasn’t merely napping—she was fighting back the effects of a fine California vino.

“The audience for the most part is awake because they’re bobbing up and down all the time. And we sit there, stone faced, the sober judges,” Ginsburg said. “But we’re not, at least I was not, 100 percent sober.”

She explained that the justices have dinner together before the annual speech, which she said Scalia hadn’t attended in several years, and that Justice Anthony Kennedy brought along a bottle of California wine that was just too good to resist.

“I vowed this year — just sparkling water, stay away from the wine — but in the end the dinner was so delicious it needed wine to accompany it.”

Can you blame her? As a Justice, she’s not exactly free to play along during the speech, so how else do we expect these people to make it through Obama’s one man show?

She may be a liberal. She may be a feminist. But in this moment, Ruth Bader Ginsburg is all of us.

But weren’t we all drinking right about then….

I would have to be dragged in wearing chains. The occasion would be punctuated by, “You LIE, Mr. President!” at the end of pretty much every sentence.

Sounds like a plan to me! 🙂 Get hammered, go to Pinocchio’s lying SOB SOTU address, and heckle the hell out of the lying bastard in between hiccups, LMAO! 🙂 That would be a blast!! 🙂 🙂 🙂

The “after” party would be to die for…

With this crew, that could be a literal statement.

Sounds like her typical constitutional rulings to me. I often wonder what the hell they’ve been smoking…

Ginsberg will never be ‘all of us.’ She will never even be ‘most of us.’