The Economics of Measles

The Economics of Measles 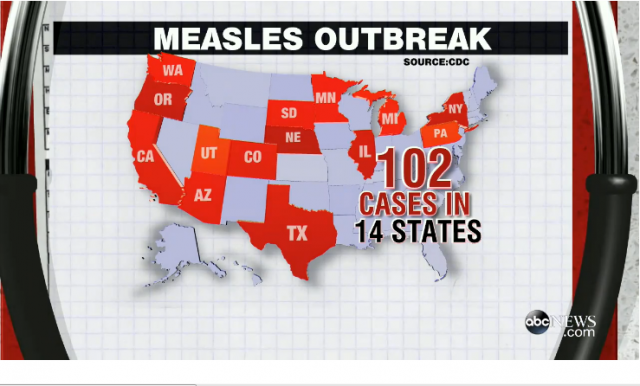 Add Wisconsin to the ever expanding list of states impacted by the measles outbreak. The state’s public health officials indicate that two patients are now isolated and being tested for the disease.

Last week, there were 14 states with 102 infected citizens and public health officials were warning that the outbreak of this formerly eradicated disease was going to spread.  It looks like that prediction is true.

I suspect other states will be joining Wisconsin shortly. Meanwhile, the crisis continues apace in California, as news comes of an infected San Francisco man riding the very public BART system to his job at at LinkedIn and then heading out to a local bistro.

There is some good news to be found amid the notices of fever and rashes, however. Disneyland, the epicenter for many of these cases, isn’t seeing attendance plummet.

Speaking with Bloomberg news, Iger said his company has “not discerned any real impact from [the measles outbreak] to date” and with an uptick in advanced park visit bookings, “we conclude that there’s really no impact from this.”

…Despite these figures, visits to all domestic Disney park locations were up by 7 percent in the year-end quarter, with both Orlando and Anaheim experiencing all-time high attendance records, according to CFO Jay Rasulo.

Everyone probably had the same idea I did: A great time to go if you are vaccinated! Mickey must breathing a sigh of relief.

For those of you who dabble in stocks, now might be the time to consider expanding the portfolio to include firms that make vaccines. Between flu shots, whooping cough boosters, and the aggressive measles vaccination campaign, the business is growing faster than bacteria in a petrie dish. For example, one of San Diego’s local firms has just seen a huge spike in sales.

Quidel said after the close of the market on Wednesday that its fourth quarter revenues rose 27 percent year over year on strong infectious disease product sales.

In a conference call recapping the company’s earnings, Quidel President and CEO Douglas Bryant that growth in the quarter came from the firm’s influenza and Strep A products across all platforms; Sofia RSV immunoassay; AmpliVue and Lyra molecular products; and grant revenue.

Another firm, Novavax Inc, has begun early-stage human trials of an Ebola vaccine; the company has the means to manufacture millions of doses of the vaccine every month andplans to develop it further.

One could argue that the country’s new infectious disease awareness arose in the wake of Texas’ Ebola virus infections. Now, lawmakers want to make sure the state is ready if something like that happens again.

It would allow the governor to declare a state of infectious disease emergency and grant health officials more authority to detain those who may be affected. It would also create a stockpile of protective equipment that could be accessed if an outbreak occurred.

…The bill would also keep the infectious disease preparedness task force established by then-Gov. Rick Perry last year as an advisory board to the current leadership.

More states will likely be developing their own version of such legislation in the near future.  Their requirements should make the firms supplying the equipment and injections even more profitable.

Gone are the days when lifestyle diseases could be the sole focus of our public health officials, businesses, and politicians.  Free market rules apply — we need to create the supply for the new infection control demands in today’s world.

I’m familiar with a feller who sells organic pharma, but I don’t think it prevents or cures measles.

So a disease outbreak of 100 individuals is now becoming an excuse to have the infectious disease martial law. Nice! Open the borders, allow infected people in and when when some citizens get sick, then iron fist of gov is right there to “fix” the problem. It’s not about the disease, inoculations, vaccines or anything else other than an orchestrated power grab. I’m surprised that more haven’t gotten sick because of gov negligence.

The stock market angle mentioned above reminds me of pump and dump days of trying to day trade. A stock would be driven up on some news, only to dive right back down. Medical discoveries or innovations were ripe for this. But the efficient market theory held pretty well, as by the time the crowd heard about it, someone was already in, and they dumped into the news. By the rumor, sell the news … is the slogan.

So a conspiracy minded person might think Merck is hyping the measles thing. This local woman made the local news website since she was on national TV as against vaccinations, sort of. Her husband is a doctor, she has what looks like well founded info.

One good point she makes: Just disqualifying that one quack that faked the thimerosl study is not adequate proof that the vaccines have no side effects, which may be worse than other risks.

Indeed, that is 95% of the argument I hear, and it may well be that is what started the scare in the Whole Foods Market crowd. But it is not a double blind study showing the safety of the vaccinations.

Anyway, she sounds pretty thorough and educated, but I have to put it in the stack of things to study later.

on further reveiw, that woman is a “naturopath”, and though she points to a lot of science, my impression is she doesn’t consider the probabilities well enough, and that’s what it’s all about. But unless she’s lying, she got a polisci degree at 19, then law school (degree?) at 22, so she’s not an average dolt.

Considering government changed its mind on cholesterol and butter, is selling us on global warming, and doing common core partly to sell us a lot of expensive testing, I guess we can only hope the CDC is not equally compromised. But are we told the truth on where these measles of flu problems are coming from? It all seems to be one strain out of Disneyland.