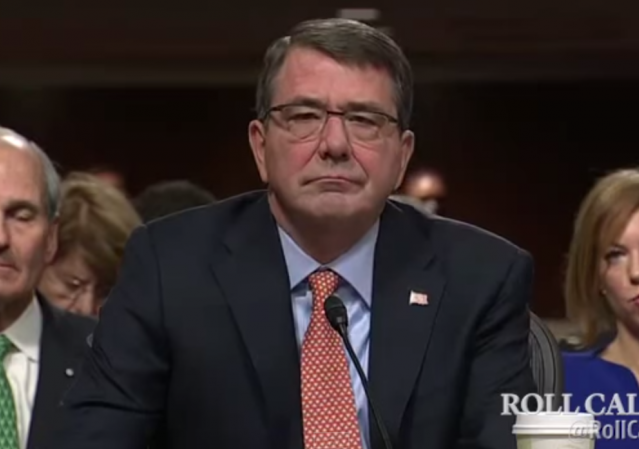 In a 93-5 vote, the Senate voted to confirm Ash Carter as the new Secretary of Defense.

If you were unable to watch the confirmation hearings, this is a great wrap up:

The Senate easily confirmed Ashton Carter, a former number two at the Pentagon, to be the new Secretary of Defense.

He will take the helm at DOD as the United States is immersed in several complex national security challenges across the globe, including the widening military campaign against ISIS.

A respected technocrat who has served in a number of high level positions at the Pentagon, Carter will replace Secretary Chuck Hagel, a former Republican senator who resigned after less than two years on the job when he was unable to fully mesh with President Barack Obama’s national security team at the White House.

Carter, who has degrees in theoretical physics and medieval history from Yale and Oxford, was approved unanimously by the Senate Armed Services Committee Tuesday. The committee held a lengthy confirmation hearing for him last week that became a proxy for Republican senators to attack the President’s handling of various international hotspots — like Afghanistan, Syria, and Ukraine — that Carter will now help manage.

“He is one of America’s most respected defense professionals, respected by Republicans and Democrats alike,” said Sen. John McCain, R-Arizona, who chairs the committee.

“I have no doubt the vote on Dr. Carter will be overwhelmingly favorable,” said Sen. Patrick Leahy, D-Vermont, in a floor speech. “He served as the day-to-day financial officer at the Pentagon. So he is one of the few people that understands, really understands, the complexities of the Pentagon’s budget.”

At the hearing, Carter promised to be a straight shooter with Congress and the President. He even presented views on Afghanistan and Ukraine that differed slightly with current administration policy.

In a floor speech Thursday, McCain warned the biggest challenge Carter might face is “White House micromanagement of the Defense Department and over-centralization of foreign and defense policy,” which McCain said Hagel and his predecessor Lean Panetta “severely criticized.”

Carter appears to have an IQ above room temp, anyhow.

I must say, however, that Hagel, despite being one of the stupidest men to ever hold the job, showed some moxie dealing with Pres. ScamWOW.

His tenure could have been MUCH worse.

Man I have taken some jobs that I knew were gonna be challenging, but I have never taken one that I was pretty sure would be the equal to taking a shot to the groin daily. This guy might be in for a rude awakening.

If anybody can, Ash can.

Gawd WILL get you for that…

I see what you did there…SHAME ON YOU!

Isn’t this the guy that said he wouldn’t let the White House interfere with the DOD?

What is this, Obama’s fourth DoD in six years? Is that a record?

Carter is about the best we could expect. Obama just wouldn’t hire anyone who won’t go along with his gutting of our defense establishment to pay off his cronies and parasitic supporters.

Obama has never hired a cabinet officer who wasn’t an empty suit and a yes man.