Will the world end if DHS is temporarily unfunded? 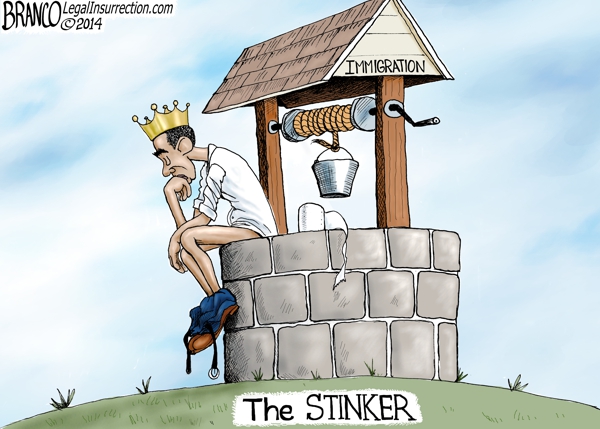 You gotta love The Imperial City — everyone is an obstructionist and no one is ever responsible.

In this particular tale of drama and woe, the previous Congress passed appropriations bills lasting one fiscal year for every major government entity save the Department of Homeland Security. The idea being that once the newly elected Republican majorities took their seats in January, they’d have a strategic advantage in pushing reforms and curbing President Obama’s executive immigration overreach as conditions for continued agency funding.

Currently, DHS is only funded through the end of February.

The House passed an appropriations bill that was heavy on the enforcement (well done, House Republicans).

Senate Democrats keep filibustering the House Bill so the Senate hasn’t even had a chance to duke it out.

Back at the House, Speaker Boehner told Senate Democrats to “get off their asses” and stop obstructing (there’s that magic word again) the bill the House passed.

All the while, Senate Democrats continue to cry “unfair!”

Meanwhile, down in Texas, a judge was all, “yeah, no Obama.” Meaning that the fit the Senate Democrats are pitching is over an Executive Order that cannot be legally implemented. Or as Senator Sessions put it, “Congress cannot fund the very action which dissolves its own powers.”

And DHS is tweeting on their own behalf:

Which brings us to now.

Ryan Lovelace at National Review explored just how damaging a potential DHS shutdown might be:

If funding runs out for the Department of Homeland Security later this month, it’s unlikely that most Americans will notice any difference. Nearly 200,000 of DHS’s estimated 231,117 civilian and military employees were deemed “essential” and continued working during the 2013 government shutdown, according to the Congressional Research Service. Such “essential” employees — those deemed responsible for saving lives and protecting property – would remain in place again if DHS’s funding ran out this time around, as NRO has previously noted.

But such facts have not stopped DHS secretary Jeh Johnson from describing the impact of a shutdown on his department as catastrophic. In December, Johnson warned the House Homeland Security Committee that he would not be able to “engage in new starts, new spending, new initiatives, new grants to state and local law enforcement to fund homeland security missions.” Since that time, Johnson told CNN on Monday, he is on Capitol Hill “virtually every working day” sounding the alarm.

“Let’s not forget that the Department of Homeland Security interfaces with the American public more than any other department of our government,” Johnson said. “[A lack of funding] means furloughing at least 30,000 of our department and cutting back very significantly on our operations to pursue homeland security.”

What Johnson neglected to mention was that if the department actually needed any of those 30,000 non-essential employees during a shutdown, it could recall them immediately in emergency situations.

Moreover, the department has not associated the number of non-essential employees — who account for approximately 13 percent of DHS’s total workforce — with specific programs of the federal government. It has only said that the loss of these employees would harm various “activities,” such as civil rights and civil liberties training for law enforcement, Federal Law Enforcement Training Center activities, and other research and development efforts.

But if perception is reality, then the GOP could be the party taking the hit for this particular standoff, that’s if this CNN poll is accurate, anyway.

Terminate them. Every one. Put the money back into the Treasury. Whatever they were doing the “essential” employees can pick up. Alternately, leave it done — it wasn’t essential by definition.

Wanna bet they shut down the Parks and Monuments again? Just because?

Really, people should have noticed before that the shutdown would not mean too much, except that nobody would get paid until it was over.

GOP may be the one to take the hit?

No one should care about statements like that. The GOP will perpetually be blamed no matter the cause or outcome.

Why is it such a horror for government employees to get laid off or otherwise lose their jobs when it is a daily event for the private sector where millions have lost their jobs?

because government is a democrat jobs program for the otherwise unemployable. They all vote “D”.

And I would send them all packing.

We love HH but he needs a down arrow every once in awhile to keep him grounded.

Not even an “Executive Order,” just a DHS memorandum. Not even a rule which had an opportunity for notice and comment.

Once again, you capture a true portrait Obama speaking out of both sides of his mouth.

His mouth? I think you mixed up orifices.

Oh no, what will the professional gropers at the TSA do?

One in three women trying to pass through TSA checkpoints are sexually assaulted!
Defund the TSA!

Even though we know these agencies are run by Democrats, some Republican with cojones needs to tell them to stop tweeting partisan rhetoric. That is not their place. They work FOR the government, which includes both houses, who in turn represent all people. Agencies are not there to support either party, and this tweet explicitly supports one party over another. Someone needs to tell them: STOP!

Save money by shutting down TSA and return the screeners back to private nonunion companies.

The DHS needs to be disbanded and broken back down to pieces.
We cannot continue to blindly fund mega-budgets in the billions where we have little or no idea what we are doing.
The Secret Service, again should be the Secret Service, Border Patrol should be just that.
Otherwise, you get a budget paper that says ” Here is the DHS Budget. Sign here. ”
Identical to Omnibus spending. And designed to be so.