Plus, a Harry Reid meltdown! 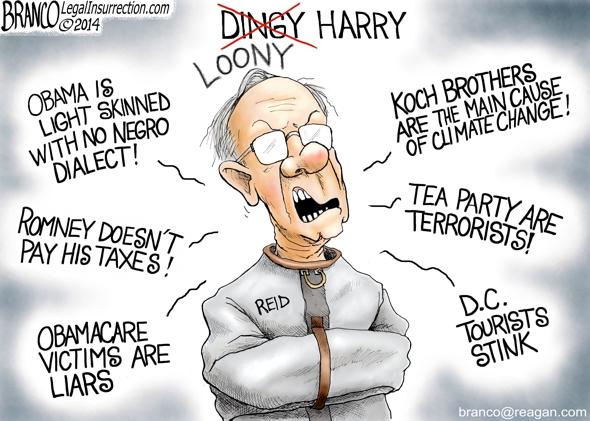 Senate Democrats didn’t learn much from their stunning defeat in the midterms, did they?

This afternoon, Reid and Durbin led their caucus on an obstructionist crusade to shut down progress on a necessary Homeland Security funding bill; Democrats managed to prevent the bill from reaching the floor for debate, which means that GOP leadership is going to have to circle back on a new attempt to keep the department funded while blocking Obama’s 2012 and 2014 plans to grant deportation amnesty.

GOP leaders, who have said they will not let the department run out of money, will now have to come up with a Plan B to try to overcome the objections of Democrats, who are trying to defend President Obama’s 2012 and 2014 deportation amnesties.

“The only way to finish a bill is to start a bill, and today they voted to refuse to start that process,” said Sen. John Cornyn, Texas Republican.

Democrats, though, countered that they won’t debate any bill that tries to undo Mr. Obama’s amnesties, saying the focus should be on giving money to the department, not an effort to try to overturn the president.

GOP leadership had to have seen this coming from a mile away. During today’s media roundup, Senate Minority Leader Harry Reid (D-NV) lashed out irrationally against the Republican plans to fund Homeland Security while blocking President Obama’s executive immigration actions:

.@SenatorReid: "It's obvious that Republicans are more afraid of DREAMers than they are of ISIS."

Senator Reid came back from an extended hiatus yesterday, and wasted no time in blasting Republicans over using the power of their majority to fight back against executive amnesty:

“The work of this Senate should be based upon what we’re able to do for the middle class. We are a constructive minority and we proved that last month. Take, for example, TRIA, terrorism risk insurance.”

“Senator McCaskill said it best, the Republicans are more afraid of the DREAMers than they are of ISIS. ISIS, by the way, has said they’re coming our way. Why should we be dealing with issues that have nothing to do with homeland security? We should pass a homeland security bill with no strings attached to it.”

The lack of self-awareness burns.

Not content with having blocked over 300 House bills from debate while the majority leader, Reid now seeks to obstruct from even the minority position. The Pontif of No.

…and GOP ‘leadership’ will do just as much about it now as they did when they were in the minority…bet on it.

OBAMA WOULD SPEND HARD WORKING AMERICANS TAXES, ON ILLEGAL ALIENS WHO GIVE US THE FINGER?

Last weekend important news was leaked, that the inception date for Obama’s mass felony amnesty for processing of illegal aliens by unconstitutional dictate will begin on February 18, 2015! Yet the Obama administration clearly violated the rule of law when he issued almost 5.5 million more work permits than congressionally set limits allow according to a report by the Center for Immigration Studies (CIS). The report shows that, according to U.S. Citizen and Immigration Services (USCIS) data obtained by a Freedom of Information request, from 2009-2014 the agency issued 5,461,568 new work permits to immigrants, beyond the 1.1 million legal immigrants and 700,000 guest workers admitted to the U.S. each year. His administration has constantly lied, cheated and evaluated the peoples wish, to build and seal real fencing, appropriated the funds to make E-Verify mandatory. No more easement for illegal aliens to slip into America showing the disdain for our laws.

After the report was released, CIS Director of Policy Studies Jessica Vaughan commented on the report’s findings. “I was astonished at the huge number of work permits that are being issued by the Obama administration outside the legal immigration system through executive discretion, especially at a time of high unemployment and stagnant wages. Besides the effect on the American worker, it encourages and rewards more illegal immigration.”

A large portion of voters are out for what they can get FREE of charge, the parasites that live amongst us and not just illegal aliens? They sit and collect the benefits of American sweat who have worked all there lives. Millions of our population is out of a job, out on the streets. Yet Obama wants Washington to approve billions of dollars in catering to foreign nations, who give us the finger and its people that have crossed into our country. King Obama has laid out laws that they cannot be touched by border agents; a ‘Catch and Release’ program, that if you reach America, it becomes a sanctuary for these people. President Obama has become a nemesis to the taxpayer, and taking us deeper into the economic toilet. THIS IS ONE OF THE PRINCIPLE REASONS THE FEDERAL BUDGET KEEPS RISING.

Both sides are guilty of not protecting the people from foreign and domestic enemies. We have an Imperial ruler who cares more for the welfare of illegal aliens, than he does for the American people. Millions of Americans are still seeking work, and this President is giving a free pass, social security card, health care, child tax credits, food stamps, cash payments, low income housing over the needs of veterans, single mothers, orphans, our sick, blind and disabled; our mentally handicapped.

The GOP promised to overturn amnesty, to defund or outright get rid of Obamacare and even to impeach the despicable excuse for a president. But now…under spineless House leader John Boehner’s guiding hand they’re flip-flopping. The ruling Republicans are crumbling and making rumblings they may not do anything? This makes no sense unless John Boehner is cutting deals with Obama. We don’t know what he’s been promised but we sure know what we were pledged and we intend to force the GOP to make good.

Don’t be tricked by the breather in Washington, thinking you can sit back patiently and do—nothing? We urge you to call your Representative and Senators (the Capitol Switchboard is 1-866-220-0044) and ask them to keep up the pressure on their state and federal lawmakers. CALL YOUR MEMBER OF CONGRESS OR STAND ASIDE FOR AMERICAN PATRIOTS. Every time an illegal alien slips past our unsecured border, we, the taxpayer must support them. Learn more at NumbersUSA or Alipac on this toxic subject If neither party will seal the border.

Obama has all the funds he needs to begin the move in starting this amnesty in 18 days and we need your help right away to get into phoning Washington back against this plot that will result in the deaths of many Americans, loss of our sovereignty as a nation, billions of lost taxpayer resources, and election after election going to radical socialist candidates in the future!

America needs to know that enough of you stand with every Tea Party Conservative, with every patriot who is an Independent of any party, of any delusional Liberal any of our citizen who is not human parasite and lives of the hard work of taxpaying Americans. If you are black-white-brown, or any other skin color, join the fight to block King Obama’s illegal alien amnesty. He is determined to swamp this country with criminals, as he secretly has already released 36 thousand back in our neighborhoods, with large numbers already detained for new crimes.

We face of our greatest challenge yet, as many of you who have stood with us to stop Amnesty so many times before and thus force Left wing Liberals like Obama out to the open to his anti-American agenda, of forcing us all into a precarious situation of being governed by a few elites as was the consequences of the Soviet Union. This self styled dictator his view of the world, run by the inept United Nations as he tries to steal our sovereignty behind our backs. He has already trampled our god given rights to self determination given to us by the Founding Fathers.

The Constitution gives the president zero power to write law and yet this is exactly what he has imposed.

The law specifies 1.1 million (too much anyway, that numbers should be zero) and Obama ILLEGALY issued over 5.5 million.

There is zero outrage from the GOPe.

Remember the 1980s, when 300,000 illegal aliens constituted a “crisis” and amnesty was the only way to solve it?

Sounds like it is time for a reconciliation vote to me, that only takes 51 votes, the Dems should be familiar with that process.

It’s time for the nuclear option, but then again, that would require a very rare species: a Republican with balls!

There are many balled Republicans, just none in leadership.

The ones bouncing off their chins don’t count.

Can we take up a collection to have Dingy Harry’s skull CAT scanned?

Lets be honest, we know it really happened in his 50 shades room, come on.

(Oh, and no I will not by the comet so you can scrub your brain of that image, that would defeat the point.)

Uhh, this was supposed to be a reply to @walls above post, but it didn’t turn out that way, lol.

Can’t they use Reconciliation and jam it down their throats, the same way they jammed ACA down ours?

That would take courage, gumption, and a will to actually do what they were elected to do.

Considering that illegal aliens are destroying this country, and if Democrats and RINO’s succeed in passing Amnesty we can all forget about America as we knew it, while ISIS is only destroying what pathetically little there is of value in Syria and Iraq, I don’t see how Reid thinks his “attack” will have any impact.

Illegal Aliens constitute an existential threat to the US as free country. ISIS does not.