Boehner: Ask Senate Dems when they’ll “get off their ass”

Boehner: Ask Senate Dems when they’ll “get off their ass”

Democrats, the party of “no” 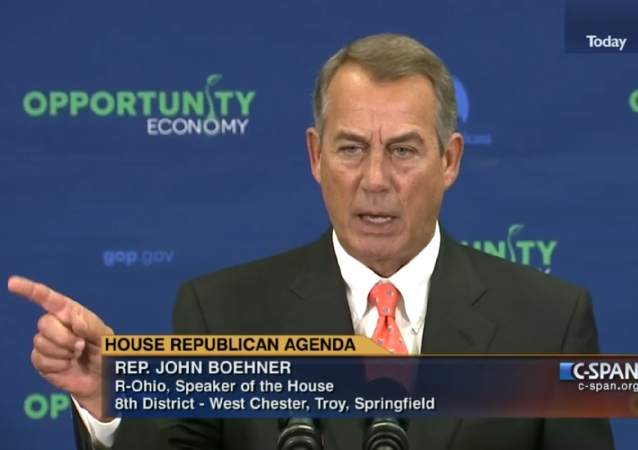 Not amused, Speaker Boehner held a press conference and minced no words:

“The House did its job. We won the fight to fund the Department of Homeland Security and to stop the President’s unconstitutional actions. Now, it’s time for the Senate to do their work. You know, in the gift shop out here [in the Capitol], they’ve got these little booklets on how a bill becomes a law. Alright? The House has done its job. Why don’t you go ask the Senate Democrats when they’re going to get off their ass and do something other than to vote ‘no.’”

Senators Sessions, Lee, and McConnell all issued strong statements calling out the Senate Democrats’ repeated attempts to obstruct voting on the bill.

“Senate Democrats, following their party leaders, blocked debate on this bill—a bill which fully funds every lawful activity of DHS. What the bill does not fund are actions that violate the law. Senate Democrats are voting to protect an imperial overreach and to deny citizens control over their own government. They are advancing an open-borders agenda against the will of the American people,” said Senator Sessions.

Senator Mike Lee called the Democrats’ behavior “embarrassing” saying, “Republicans are trying to keep their promise to the American people, do what they sent us here to do, and fund our homeland security while holding Democrats and the President accountable. But Senate Democrats refuse to even allow consideration of the DHS funding bill so they won’t have to declare where they stand on the President’s illegal and unconstitutional action on executive amnesty. This effort to try and hide from the American people is embarrassing.”

Meanwhile, Majority Leader McConnell called out Democratic Senators whose rhetoric isn’t consistent with their actions, saying, ““Democrats are blockading Homeland Security funding in order to defend executive overreach the President said himself he couldn’t take — many times over. As I indicated yesterday, this is the reason the Senate can’t move forward. So it needs to end. And here’s the simplest and most obvious way it can. Many Democrats previously indicated opposition to the kinds of overreach described by President Obama as ‘unwise and unfair.’ So all they have to do is back those words up with action. If Democrats claim to be against overreach and claim to be for funding the critical activities of the Department of Homeland Security, then there’s no reason for them to continue their party’s filibuster.”

The DHS should not be funded, it should be disbanded.

Good thing to say. I’ll just watch to see if that is any kind of spinal growth at work here. You know…a trend…

My first thought is that the fix is in and it is time for the GOPe to put on the show for the gop base so that the base thinks that the GOPe is serious.

C’mon. John Boehner says he was Tea Party before there was a Tea Party. He’s like Moses to conservatives. I wear a WWJBD wristband, fer crissakes.

It’s a good thing you didn’t get the necklace version. Plenty have died from strangulation from those things, almost all of them while listening to The Weeper of the House talk about his accomplishments.

“Boehner: Ask Senate Dems when they’ll “get off their ass”. How about the Republicans? They are almost as worthless as the Dems. McConnell cannot control his group and we now have about 40 lefties and 30 righties and the squishes in the middle. McConnell is one of the squishes.

If the Boehner and McConnell are serious about this, they’ll START NAMING NAMES of Democrats who have claimed to be against exec amnesty and yet won’t vote to stop it.

And I’m sure there’s a dozen other things they can do up there. The place is full of all manner of potential stratagems.

Where has this attitude been since they took control of the House, instead of caving every time the opportunity presented itself. Pass the bill through the Senate via reconciliation since it’s a budget bill and let BHO veto it. Then he’s the one shutting down part of the government.

Remember when we thought holding majorities in both houses of congress would provide victories over the Democrats? Good times, good times.

Harry Reid has returned to the Senate floor.

Everything was working fine until he came back and got involved again so heavily. They passed the Keystone pipeline bill, after allowing a lot of amendments to be offered.

There is no good reason for this, of course. The Senate Democrats should just let the bill come to the floor for a vote, vote against it, and if it passes (there actually could be some problems with Senate republicans agreeing to everything that’s in the House bill, for it revokes what President Obama did in 2012 also) let President Obama veto it, let the Republicans try to override it, and have the override fail.

Maybe in exchange for that, get an agreement from Senator Mitch McConnell that their own bills and amendments, or certain ones

Then they can get back to business.

All this is just to save President Obama from the embarrassment of a veto. Or something.

Whatever is going to happen – probably a short term funding of Homeland Security – will happen either way the Democrats play this, but if they just let the bill pass and be vetoed, it’ll be over a lot sooner, and they can do other things.

I said the last time Boehner used the tactic of one cuss word in a press conference that it wasn’t spontaneous or superfluous but spoken with the intent to force the main news outlets to put at least that sentence out there for the people to hear and here he’s done it again.
Listen to just that sentence with the word **s in it. The words are slightly shoved together and he speaks it in one breath. That’s to leave no space between words to cut part of it out and remove the context. Rush Limbaugh does it sometimes in interviews with a hostile interviewer and it works.
Boehner’s use of a cuss word to give import to his message and ensure it gets out to the general public is used selectively and with purpose. Don’t underestimate someone not just willing to use such tactics but, most importantly, able to use them effectively.
Back to the topic at hand: Hopefully now the poo throwers from the Senate will show they know how to lead and work with others in ways that gets something passed to limit Obama’s over reach. That’s gonna take getting some Democrats on their side in order to be able to over ride Obama’s veto. Wonder if Cruz is still having meetings with the House GOP on how to undermine Boehner or if he’s actually trying to get a solution.
(Love Cruz’s mind and politics, hate his tactics.)

When was this? What was the result?

Reid has turned a “blind eye” to the will of the people…business as usual.