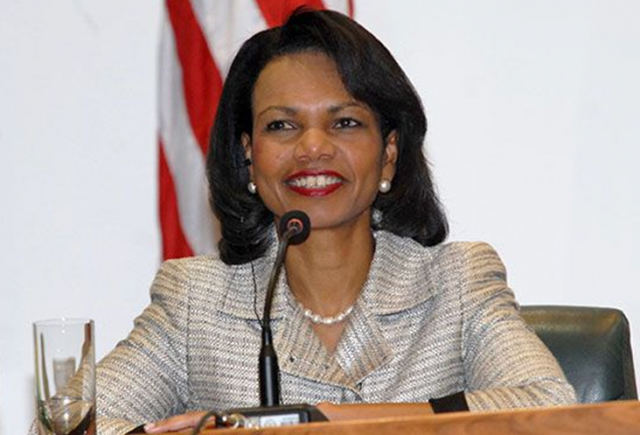 Very few Californians will be happier to see Senator Barbra Boxer retire than me, but many are already clamoring to figure out who will replace her in 2016.

Amy Miller analyzed one shock poll that had President Obama’s approval ratings cracking the 50% mark. Now, I offer another intriguing poll that has a Republican candidate in the lead for Boxer’s spot.

She’s been out of public life for years, she’s never run for office and she’s a Republican, but Condoleezza Rice is now the first choice of California voters to replace Democratic Sen. Barbara Boxer in 2016.

A Field Poll released Wednesday showed that the former Bush administration official leads a list of 18 potential Senate candidates, with 49 percent of likely voters saying that they would be inclined to vote for her and 39 percent not inclined.

At this point, it’s probably the fact that she has never been an elected official—and has been out of the spotlight for many years—that has endeared her to the California electorate.

Many of the citizen activists I know are pleasantly surprised. Sarah B., co-founder of SoCal Tax Revolt Coalition, says “Don’t tease me!” Jeff Lassle, who has worked as an activist addressing the state’s environmental regulatory overreach, says, “Rice would be a welcome and more intelligent replacement.”

However, Rice doesn’t look ready to jump in.

“Dr. Rice plans to stay at Stanford and continue life as a professor, and as such she has no plans to run for office in 2016,” Georgia Godfrey, her chief of staff, said Tuesday. And the poll shows no other potential Republican candidate coming close.

Being a Republican candidate for a statewide office in California is normally an exercise in futility. For example, Republican Neel Kashkari ran an innovative campaign and still lost by nearly 20 percentage points. And the last Republican who faced Boxer, Hewlett-Packard executive Carly Fiorina, lost by nearly 10%.

Perhaps the best news for my conservative friends is at least 49% of likely California voters are still ready to vote Republican. But the smart money is on bracing yourselves for another Democrat. The battle amongst candidates on the other side of the aisle has already gotten contentious.

California Atty. Gen. Kamala Harris said Wednesday that she makes “no apologies” for an aggressive U.S. Senate campaign that some fellow Democrats have complained is aimed at keeping others, notably a Latino candidate, out of the race.

“I have always entered races early and run hard, and that’s what I’ve done in this race,” Harris said in an interview with the Los Angeles Times, her first since announcing her Senate bid. “I make no apologies for it.”

But she did disagree with the sentiment expressed by one of her supporters, former Assembly Speaker Willie Brown, who urged former Los Angeles Mayor Antonio Villaraigosa to stay out of the race out of respect for Harris.

Other potential Democratic candidates are Congresswoman Loretta Sanchez and Congressmen Jackie Speier and John Garamendi. Clearly the field is still forming, and I am looking forward to keeping Legal Insurrection updated on the likely mayhem.

Here’s to hoping that Rice changes her mind, if for no other reason, than she conducts herself with style and grace — which Boxer has clearly struggled to do.

0bungler’s ‘approval ratings cracking the 50% mark’ are as accurate as the unemployment stats – – – and can be attributed to Gallup’s CEO fear of being ‘disappeared’.

Because no one has studied history.

…Hmmmm…speaking of polls and poll cooking made me think of this.

Voters in three key swing states that President Obama won twice not only widely disapprove of Obama’s job as president, but they give him no credit for the improving economy and overwhelmingly want to “change direction” from Obama’s policies.

“By margins of 24 points or higher, voters say they want the next president to change direction and not follow President Obama’s policies,” Quinnipiac Poll assistant director Peter Brown said in a release.

The Quinnipiac University poll of registered voters in Colorado, Iowa, and Virginia was conducted from February 5th through the 15th and was released Thursday.

Name recognition (early poll norm), plus they didn’t see the little R next to her name.

Or they just assumed that because she is black that she must be a democrat. Because we all know, blacks cannot be Republican…

Electing Condi to a CA Senate seat would be nothing less than a coup.

..and neither has Pantsuit but the looney left is all lather-ed up over her.

i don’t see her being all that great a Senator, and, from what i can see, she’s a Jeb Bush type “Republican”…so color me utterly uninterested.

#CashAndCarry lost in part by telling voters here he supported gun control, and would not be interested in rolling back any of our many stupid laws, a message that voting block got loud and clear.

personally, i voted for him AND moonbeam on election day, just to make sure no one could mark an empty spot on it later…

until the RINOs of the GOPe stop being stupid, nothing is going to change here in #Failifornia

Red-man, I don’t disagree with you about her being a Jeb-Bush type however a few things to consider:
1 – She would be a Senator with an “R” by her name from California.
2 – She really is her own person and may be a reliable-somewhat-conservative-considering-she’s-from-California vote on things such as getting the government out of our pockets.
3 – She would be a good addition to the Foreign Relations committee since she used to be SoS.

This is speculation on my part but it is based on her actions as Bush’s National Security Advisor. She wasn’t shy about telling Allies to get in line and etc.

I agree with all this, and might put it this way: Condi for Senator in TX? Ah, NO. Texas has many reliably conservative candidates ready to go. But California? Oh, hell yes. Any R senator in CA has to be considered an unexpected gift, however centrist.

It’s still too early. Like someone mentioned above, wait till the voters see that R next to her name.
Kamala was a kept women, by the way. A mistress of Willie Brown.