Approval on economy up from 2014 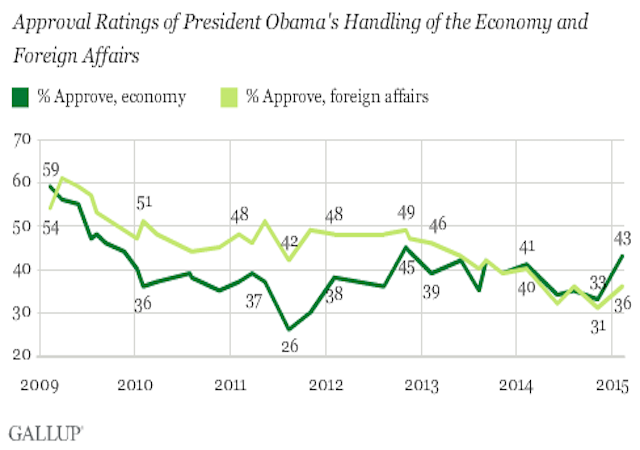 By all accounts, this Administration seems to be having a hard time keeping its head above water—so why are its polling numbers improving?

A Gallup poll released today reveals that, for all his troubles, President Obama has managed to force his personal approval rating back over the 50% mark, with 51% of American adults willing to say that they have a “favorable opinion” of Obama. A generic sort of benchmark—and completely separate from his job approval rating, which normally clocks in lower than general favorability—but still a significant one, because it serves as a hint about how well the Administration is doing in terms of optics, generally.

Obama’s approval ratings with regards to his handling of the economy and foreign affairs are also up, but still well below the 50% mark.

Americans like the guy, but generally dislike his policies—what a bizarre piece of data.

The recent improvement in Obama’s economy and foreign affairs approval ratings mirrors the trajectory of his overall job approval rating, which was 40% in Nov. 3-9 Gallup Daily tracking but was 47% in the latest weekly average, through Feb. 15. The increase has been aided by more positive economic news, including lower gas prices, which have boosted Americans’ perceptions of the U.S. economy’s health to the best they have been since the 2007-2009 recession.

The more positive economic news may also explain why his economic approval rating has increased more (up 10 percentage points) than his foreign affairs approval rating (up five points) since November. While the economy is getting better, Obama continues to deal with a challenging international environment, including the Ukraine conflict, the Islamic State’s presence in Iraq and Syria, as well as the ongoing threats of international terrorism, the Israeli-Palestinian conflict, and North Korea and Iran. As a result, his foreign affairs rating remains on the low side relative to his 2009-2013 ratings.

Obama’s overall approval rating has also generally exceeded his approval for handling both the economy and foreign affairs. This has been the most common pattern for presidents, but there have been many exceptions.

Gallup’s analysts attribute Obama’s gains to an improving economy, as well as his attempts to court the immigrant community via his executive amnesty plan. The one thing that can be said about this Administration when it comes to their disastrous policy decisions is that they don’t back down—and that could actually be helping these ratings crawl back up from the bottom of the barrel. No one likes a waffling president, and the fact that Obama has stayed the course through a barrage of public ridicule, scandal, and a 26-state coup is probably not insignificant when it comes to how his reactions affect the way Americans perceive him both as a man and as a leader.

It also highlights the importance of shining light every time this Administration makes one of its stupid, dangerous decisions—they’re still in control of the narrative, and it’s our job to see just how far we can push that status quo.

Proving, once again, that one half of the American people are imbeciles.

Or maybe, they are responding to being sued for publishing unfavorable numbers.

That Poll is Faked! (See below.) Once a lying DC politican, and party, always a lying politican and party.

How the ObamaMedia Faked Obama’s Growth in the Polls

“….media polls (had) a 6-9 percent tilt toward a Democratic sample.

And what McLaughlin notes is that the rate of bias has increased throughout September to create the fake groundswell of support effect
….”

Uh, if anyone doubts the reach of “the Chicago way,” let ’em stand corrected and survive where everything is rigged.

Am I alone for not being fooled by what was and still is going on or is this “discovery” sorta like the intimidation that prevailed when the Roberts SCOTUS declared Obamacare as being by simply changing a penalty fee into a “tax?”

Correction to the above…

you can get the results you want by adjusting the questions and the population asked to fit your desired end point.

as with pretty much everything released by the MFM, this “news” should be viewed with a jaundiced eye equipped with a high strength BS filter…

and yeah, there are an awful lot of stupid people running around loose in this country as well.

Jim Clifton, CEO Gallop, recently expressed his fear of ‘suddenly disappearing’ after revealing the employment numbers from this administration were cooked.

Does it surprise anyone that the approval numbers are being similarly treated – to save his butt?

There are no coincidences.

Where are my barn boots?

No use. It’s deeper than that.

All it means is that Gallup can be bought.

There’s nothing wrong with this poll if Gallup follow-ups with a poll that shows the correlating number of Americans who aren’t literate in basic economics.

I think Bill Clinton ended with the highest approval ratings even after being impeached; Truman had the worst, yet has been recognized without grudging by Republicans for standing up to Communism. Question we’ll never see: “Do you approve of legal attempts to have the mother of a Down’s syndrome child bankrupted?” The honest Democrats would say, “You betcha!”

Maybe they only polled muslims.

Anybody buying this? I doubt his approval is at 50% among Democrats.

Good to know the welfare checks are still clearing ….

I’d love to see a poll that uses a technique used when the subject is taboo or people fear saying what is really on their mind. Instead of asking Do you approve of Obama the question is worded along the lines of what percentage of your neighbors do you think approve of Obama.

It’s largely irrelevant whatever his poll numbers. He isn’t running in 2016 and the few Dems who’ve shown they might run are running away from Obama anyway. Say the real number is 39%. So what? That’s the meaning of lame duck. You become increasingly irrelevant.

check the recent Gallup poll on the King’s approval ratings as a function of religion identity. Notice when you do that, which religion rates his Master the highest. 😀 😀

Does anyone know exactly what the poll questions were?

A comment I read somewhere said something like: Saying that Obama has a 50% approval rate – really means 3% approval, the other 47% comes from the free sh^t army.