While at U.C. Davis, Students for Justice in Palestine chants “Allahu Akbar” at pro-Israel students. 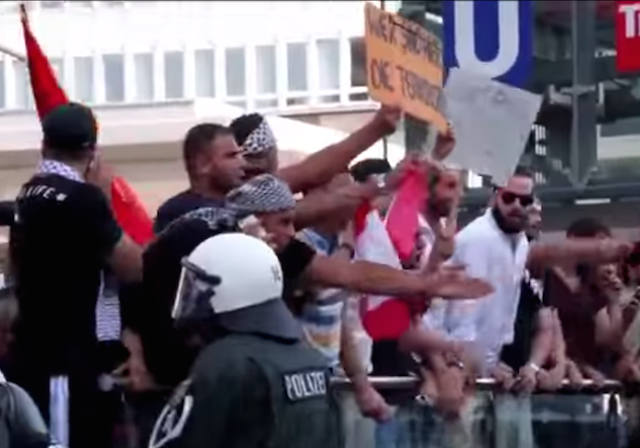 This is a theme we have explored exhaustively here, in connection with the Boycott, Divest and Sanctions movement and anti-Semitic rallies and violence in Europe.

There is a theoretical difference between being anti-Zionist and anti-Semitic. But that theoretical distinction has been completely lost on the street and campus thugs in Europe and elsewhere, who use anti-Zionism as cover for hate of Jews. That they are urged on by some left-wing Jews doesn’t change the reality on the street or campus.

That’s why anti-Zionists attack Jews for appearing Jewish (what I call Walking While Jewish).

The Prime Minister of France called it what it was:

In discussing the attacks on French synagogues and Jewish-owned businesses this summer, during the Gaza war, he said, “It is legitimate to criticize the politics of Israel. This criticism exists in Israel itself. But this is not what we are talking about in France. This is radical criticism of the very existence of Israel, which is anti-Semitic. There is an incontestable link between anti-Zionism and anti-Semitism. Behind anti-Zionism is anti-Semitism.”

And now a German Judge has also, via Times of Israel, German judge rules: Anti-Zionism is code for anti-Semitism:

At the height of this summer’s Israel-Hamas conflict, Europe erupted with anti-Israel sentiment. From London to Paris, large-scale violent demonstrations were seen in most European capitals and throughout Germany…

The wheels of justice move slowly, but they are inching forward in Germany. In a unprecedented case heard half a year after these violent anti-Israel demonstrations, last week in Essen, German Judge Gauri Sastry convicted 24-year-old Taylan Can for incitement against an ethnic minority for events at a July 18, 2014, anti-Israel demonstration in the town.

Eyewitness accounts report hostile anti-Israel chants and stones thrown from the anti-Israel camp to the smaller group of Israel supporters. According to the Anti-Defamation League, a breakaway group headed toward a local synagogue, intending to attack it.

A YouTube video of the demonstration shows fields of Palestinian flags and Turkish flags, and a motley group of young men running and chanting “Adolf Hitler” and “Death to the Jews.” In the video, popular Essen Muslim rapper Sinan-G speaks to the camera explaining this is a counter-demonstration against the Jews. “The Jews insulted us, man, this is crazy stuff,” he said.

Despite the large police presence, the crowd was clearly out of control. According to Die Welt, police arrested 49 protesters. Forty-five cases were dismissed in December.

Born in Germany to a Turkish family, Can is well-known for his anti-Israel activism. According to Die Welt, Can was caught on tape at a Copenhagen protest shouting into a borrowed police megaphone, “Death to the Jews,” “Hamas, Hamas, Jews to the gas chamber.”

At his Essen hearing this winter Can was prosecuted for his use of the term “Zionist” as incitement against a minority.

During the hearing, Can claimed he was not an anti-Semite and had nothing against the Jewish people but only against the Zionist state. In response, Judge Sastry is quoted by Die Welt saying, “‘Zionist’ is the language of anti-Semites, the code for ‘Jew.’”

Sastry’s judgment, which does not form a binding precedent in German law, essentially semantically equates anti-Semitism and anti-Zionism.

Can was sentenced to three months’ probation and a fine of 200 euros. He has until Friday to appeal.

On his Facebook page this week, Can reiterated he that he is not against Jews and stated his intention of appealing to both the district and federal courts.

Don’t think it happens on our campuses?

In addition to all the other videos and coverage we have had, consider how pro-BDS students at UC-Davis chanted “Allahu Akbar” at pro-Israel students protesting an anti-Israel divestment vote, via Washington Free Beacon:

There is a theoretical NO difference between being anti-Zionist and anti-Semitic.

There. I fixed it.

I have read a lot to try to understand, but I still don’t see the difference. Not even in theory.

I see how one could really be anti-ISRAEL (in terms of is foreign policy, for instance), and still not be anti-Jewish.

One would need to be VERY clear, and to NEVER get muddled up with the regular haters, but I can see it being a true statement for some of conscience to make and mean.

Yes, but most of Israel’s foreign policy is just efforts to counter the attacks, and the attempts to deny them their very right to exist.
I don’t see any “Anti-Zionists” attacking nobody else’s sovereignty.

I dont see there being any difference between being anti-Israel and being anti-semetic since the reason people are anti-Israel IS because its a Jewish state.

The hypocrisy here is that the vast majority of race haters on the left would move heaven and earth to get rid of anyone who dared say Gays should be made to disappear or Blacks dont deserve to live in peace YET these same race haters suddenly become mute when Blacks and Gays is changed to Jews. Actually…they become even worse than mute, they become actively engaged in the removal of Jews and the Jewish state!

Meh. Yeah, it’s certainly possible to be anti-Israel for reasons of conscience without being anti-Jewish, but in practice that’s either because you’ve been successfully lied to or because you think it’s more acceptable to let extremely evil people kill children than to do mildly evil things to stop them. The former are uninformed or fools or both; the latter are collaborators with extreme evil.

There are some people who are anti-Israel – in fact anti-Zionist – for religious reasons without necessarily being anti-Jewish. Either they believe the Jews aren’t supposed to return to Israel until the Messiah takes them there, or they think the Jews in Israel is a precondition for the tribulations attending the end of the world. As far as I know, neither group is a significant factor in the current debate.

The anti-Zionists need to explain if it is only Jews who should leave, or all people who were once aliens in a foreign land. Is there a statute of limitations or an arbitrary partition?

Anti-Zionism is the excuse dishonest people give for virulent anti-Semitism. Israel’s longstanding policy does not offer offense to its neighbors.

The blessing of having Israel there is that Jews can escape their antisemitic environments. You think the Jews didn’t know it was antisemitism that drove the Dryfus Affair?

The good news is that America is safe from this rabid hostility. And, on the college campuses where there are hateful campaigns, it doesn’t attract people outside “the religion of piece.”

What is so obvious to anyone who bothers to look into it is that most of the public antisemitism is coming from Arabic or Middle East immigrants. Pick any country, including the US, and you will see that the crowds and sign holders are all Middle Eastern in appearance. Guess what all of these anti semites have in common? Why the are all members of the religion of peace!