Investigation, assassination, and now we have formal charges 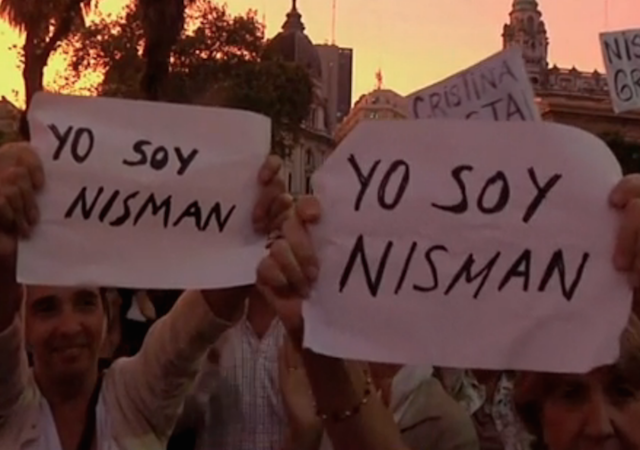 Argentinian president Cristina Fernandez de Kirchner has been formally charged with trying to cover up the involvement of the Iranians in a bombing of a Jewish center. This comes after shocking reports that prosecutor Alberto Nisman had (before his suspicious death) drafted a warrant for the arrest of Fernandez, charging her of attempting to shield Iranian officials from responsibility for the bombing.

Nisman was found dead in his home a day before he was slated to testify against the current Argentinian government.

BBC News explains how the scandal has ballooned for the Argentinian president:

Although this was an expected move, it could not have come at a worse time for the Argentine president.

Cristina Fernandez de Kirchner was already facing criticism for the way she has been managing the Nisman case, which has become the worst crisis of her political career so far.

Now she will also face pressure from the judiciary, which is demanding an unprecedented investigation into a sitting president – one that could end up with an impeachment-like process if she is found guilty.

Meanwhile, prosecutors are calling for a massive protest on the streets of Buenos Aires next week in what is expected to become the largest anti-government march in recent years.

Opposition leaders, unions and even the Catholic Church are joining calls for a fair and independent investigation into a death that has shocked this nation.

Three new prosecutors have been named to handle the case. At this point, they can either choose to continue Nisman’s investigation into the coverup, or pursue other leads. If the prosecutors choose to investigate, for example, the possibility of Syrian involvement, charges against Fernandez would likely be dropped.

The Argentinian government isn’t taking the investigation or the charges lying down:

Cabinet Chief Jorge Capitanich early Friday said the accusations and a march planned for Feb. 18 to commemorate Nisman’s death were part of a “judicial coup” against the president.

“The Argentine people should know that we’re talking about a vulgar lie, of an enormous media operation, of a strategy of political destabilization and the biggest judicial coup d’etat in the history of Argentina to cover up for the real perpetrators of the crime,” Capitanich said at his daily press conference.

Chief of Staff Anibal Fernandez told reporters the march is being organized by “drug traffickers,” “anti-Semites,” and prosecutors who tried to obstruct the investigation into the so-called AMIA bombing in 1994 that killed 85 people.

We’ll keep you updated as the case progresses.

No, no. THEY would NEVER attempt a terrorist bombing in the Western Hemisphere.