Day before scheduled to testify about government cover-up. 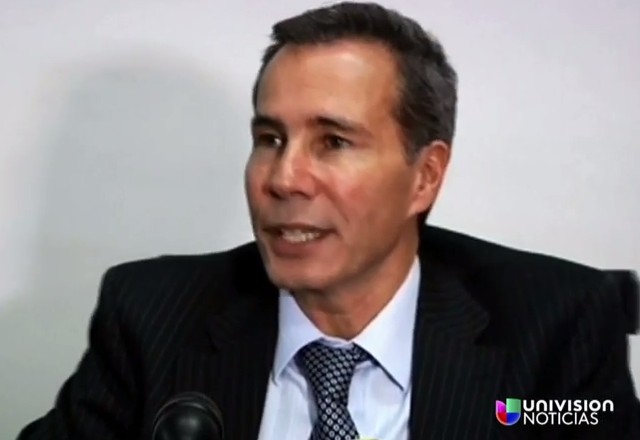 Alberto Nisman, the Argentinian prosecutor who investigated the 1994 bombing of the AMIA Jewish center in Buenos Aires and documented Iran’s extensive terror ties in the western hemisphere, was found dead at his home Sunday night of a bullet wound to the head.

Nisman was slated to testify today on his latest explosive accusations that the current government of Argentina, specifically President Cristina Fernández de Kirchner, purposely covered up Iran’s involvement in the bombing in order to preserve a grain-for-oil deal with the Islamic Republic.

The body of the prosecutor, Alberto Nisman, 51, who had been heavily protected by police sentries because of threats, was discovered Sunday night. He had been scheduled to testify on Monday at a congressional inquiry about his accusations.

The security minister, Sergio Berni, said evidence at the scene, including a .22-caliber pistol and spent cartridge found near Mr. Nisman’s body, indicated suicide. An autopsy announced later said he had died of a bullet wound to the head.

But the news immediately provoked shock and outrage from the political opposition and leaders of Argentina’s Jewish population, Latin America’s largest, who demanded a transparent inquiry into his death. The timing appeared to put a skulduggerous international shadow over his accusations.

Nisman’s work on the AMIA case led him to provide documentation of Iran’s terror network in the western hemisphere—specifically in South America—which would provide Iran with a motive for killing him. In addition to motive, Iran has an established capability of striking at its enemies on foreign soil. Christopher Dickey reports:

By the late 1990s, the Iranian government apparently decided to slow these operations after several of them started to bring down too much heat. The Germans conducted a relentless investigation of the murder of Kurdish leaders in Berlin in 1992, tracing them back to the then-head of Iranian intelligence, Ali Fallahian. The AMIA bombing in 1994 caused international outrage. And the bombing of the Khobar Towers apartments in Saudi Arabia in 1995, which killed 19 Americans, was eventually traced to another group of Iranian acolytes.

Finally, Imad Mugniyeh, seen as the key Hezbollah operative in many of the group’s terrorist attacks, dating back to the bombing of the U.S. Marine barracks in Beirut in 1983, was blown up with a well-placed car bomb in Damascus in 2008. The Israelis generally are credited with that hit.

Kirchner and Timerman can’t have wanted Nisman’s testimony aired in open court, which would have supported the charges he made last week.

Argentine newspaper La Nacion reported that Nisman had discovered a plan hatched by Kirchner to overlook Iran’s role in the atrocity, in order to “make a geopolitical move closer to the Islamic Republic of Iran, and to establish full economic ties” for the purpose of alleviating “Argentina’s energy crisis through a ‘grain for oil’ deal.” Nisman, whose findings are summarized in a 300 page complaint, now wants to question Kirchner and other officials over whether there was an attempt to “fabricate,” as he put it, “the innocence of Iran.”

Nisman, who formally charged the Iranians with having executed the bombing in 2006, claimed that Kirchner had set up a secret “back channel” to Iran with the aim of “transmitting the Presidents instructions and achieving her objectives.” A number of prominent figures have been named in connection with these clandestine communications with Iran, including staff members of the state intelligence service, parliamentarian Andrés Larroque, pro-government activists Luis D’Elia and Fernando Esteche, and Jorge “Yussuf” Khalil, a leading figure in the country’s Muslim community who is reported to have close ties with the Iranian regime.

David Horovitz, editor-in-chief of The Times of Israel laments Nisman’s loss and recalls a conversation he had with the late prosecutor two years ago.

Hearing the news on Monday morning, I could not help but recall what Nisman told me in a June 2013 telephone conversation: Tehran had established its terror networks for the strategic long term, he said, ready to be used “whenever it needs them.” In that same call, he warned that terrorist networks first established by Iran in several South American countries in the 1980s and 1990s were still in place. As throughout his investigation into the AMIA bombing, Nisman said he continued to receive intermittent death threats, by phone and email. “I report them to the authorities,” he said simply.

Horovitz noted that Nisman’s investigation of the AMIA bombing was substantial enough for Interpol to issue “red notices” for high ranking Iranian officials. (A red notice isn’t quite an arrest warrant, as Interpol doesn’t have that power, but it’s close.)

Nisman had been after Kirchner for making an agreement with Iran to set up a “truth commission” to investigate the AMIA bombings, effectively allowing the chief suspect to exonerate itself.

Now Nisman is dead meaning that Kirchner and Iran can rest a lot easier. Are we to believe that his death is really a suicide, as the Argentinian government claimed today?

damn, where did I put my tinfoil cap??

Nothing to see here, it was natural causes–his heart stopped beating when someone put a scimitar into it. [sarcasm off]

Who kills themselves on the eve of one of their biggest professional achievements?

The murderous ayatollahs are smiling today.

A brave, brave man. My deepest condolences to his family and friends.

The dude has huevos. The only circumstance under which I can see suicide is if there were credible death threats hanging over his family. Even then, he may have had other options.

This sounds like a classic witness execution. The fact that it occurred the day before he was to testify reads like a calling card warning.

yeah, a little too obvious. The Democrat bureaucratic machine does this too, except they let strong conservatives know they will be harassed (not murdered yet) by government bureaucrats. The Lois Lerner style “enforcers” are deep in the corrupt system.

There was the Boeing shakedown, Gibson Guitar assault, aggressive prosecution of D’Souza, several conservative donors or spokesmen that suddenly get audited, or the True the Vote woman that had several federal agencies harass her. They want strong American to know they will use our own government to punish us for not submitting. The Dem “calling card” is all over these actions, while Sharpton or Corzine skate.

I am old enough to remember when something like this would happen in Central or South America and we would all shake our heads and make comments about the political machinations in “banana republics”. Now we shake our heads and wonder when our own kleptocracy will fully transition from financial and bureaucratic shakedowns to punching opposing individuals tickets with a sterile .22 long rifle handgun. I guess that is “progress” if you are a progressive – or an entrenched rhino.

I’m betting within the next two years.

Sounds exactly like at least a dozen mafia movputativeies. Guy gets whacked before testifying in court. Even used the assassin’s favorite, a .22.

Single bullet might mean suicide – or it might mean the killer knew a suicide can only have one bullet to the head.

I have no idea how the following correction got turned into the above alphabet soup. Glitch Fairies are out, they got Rags in another thread.

“Sounds exactly like at least a dozen mafia movies. Guy gets whacked before testifying in court. Even used the assassin’s putative favorite, a .22.”

Oh darn. I thought I could add a cool new word to my vocabulary.

In Latin America, the term “suicide” does not have the exact same meaning that we know here, especially in this kind of case.

Ah. Kind of like when Obama says ‘decimated’ he actually means ‘nailed a couple al-Qaeda here and there.’

And then there was ‘corpse man’. However, I believe that was a deliberate middle finger to our military in particular and America in general.

The timing of this is highly suspicious. Like MikeInCA said, who kills themselves right before the biggest day of their career? Good luck to Argentina’s jewish community in getting that transparent investigation and let’s hope Mr. Nisman had back up copies of his work safely stored somewhere so that it can be brought to light.

Why do I get the feeling this is gonna be one of those situation where some government “official” is gonna make the statement with a straight face that this man died of a single shot to the base of the of the skull and the gun was found 10 feet away behind the deceased, leading to the conclusion that it was an obvious suicide.

Vince Foster committed suicide on the Fort Marcy park bench with clear weather, no rain, and no wind. Of course the fact that the FBI found NO, ZERO, NADA, ZIP microscopic blood droplets on the bench or blades of grass around the bench is merely indicative of how complicated suicide has become these days …

No bullet found either. Body stretched out neatly with arms by the sides. No dirt on the shoes. Blond hair and carpet fibers on the suit.

Widow first said the gun at the scene (which lacked a serial number, IIRC) wasn’t his. Something later persuaded her to say it was.

Witness who saw strange, menacing behavior by a blond-haired man in the parking lot told authorities what he saw, and was later trailed and stared down by crewcut guys in dark suits. Government officials said he was paranoid, therefore unreliable.

Several witnesses saw a Toyota in the lot that was not the color or year of Foster’s; government officials later said they were all “mistaken” about what they saw.

There was also the weird “suicide” note, with no fingerprints, torn into 17 or so pieces and missing the one where a signature would be expected, and sounding like an apologia for the Clintons. Not one of those many pieces was found in the first search of the briefcase, but they turned up in it later.

Etc. This case was chock-o-block full of details that didn’t add up, but at some point most of the “respectable” establishment decided it was best to go along with the official narrative and ridicule anyone who didn’t.

The strongest possible evidence for a ruling of suicide is the total absence of powder burns or stippling around the self-inflicted wound. Everyone knows these signs are never seen in a suicide!

Hillary Clinton was in Argentina?

If he committed suicide, it would have to have been induced either by the Argentine corruptocrats and/or Iranians blackmailing him or his family, or threatening the latter. May he rest in peace!

I think the cynical question goes, “So did he shoot himself in the head twice?”

Hmmm, I think I will entitle this real life crime drama as Simply Murdered, or, How to Get Away with Murder: The Argentinian Way.