Will Obama declare war on ISIS?

Will Obama declare war on ISIS? 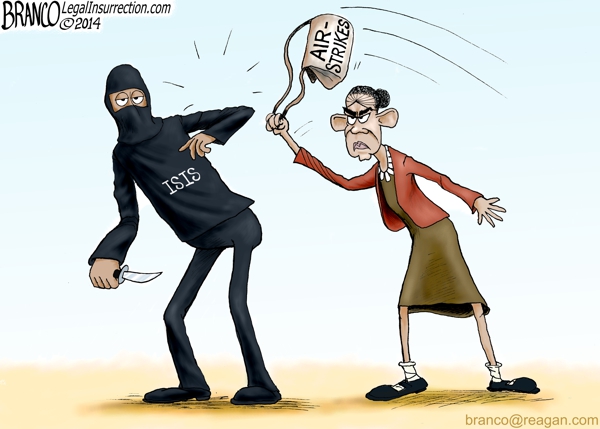 The Obama Administration’s foreign policy has from the start been plagued by a near-fatal dose of mixed messaging regarding the actions of our enemies, our mission in the Middle East, and the place the American military should hold in the context of the global economy. Late last year, members of Congress lashed out against the Administration over the Executive’s inability to define exactly what we were doing in the Middle East, and what we should be doing to prepare for future missions.

Now, we may finally receive some answers.

In a meeting with Congressional leadership today, President Obama indicated that he’s ready to propose terms authorizing U.S. military force against Islamic State. He’s been having this conversation with the leadership since November, but this is the first time he’s even come close to showing his hand.

“A good starting place is for him to tell us what he wants,” McConnell of Kentucky told reporters after the meeting.

A debate over efforts to defeat Islamic State would reopen tension over the president’s authority to conduct military operations and uneasiness among some lawmakers — mostly Obama’s fellow Democrats — about being drawn into open-ended conflicts and ground combat.

Republican Senator John Cornyn of Texas, the Senate’s second-ranking Republican, told reporters after today’s meeting at the White House that the president’s statement came as “a little bit of a surprise.”

“I think that’s helpful because we’ve been trying to get him to come up with the plan and show a little bit of what his strategy is going to be,” the senator said.

Representative Steny Hoyer of Maryland, the No. 2 Democrat in the House, said he believes Obama “is going to make some proposal” on an authorization for use of military force.

Much of the White House’s messaging problem when it comes to international terrorism comes down to its insistence on forcing every issue though the politically correct sausage grinder. Republican leadership, however, has taken steps to combat that optic by introducing new legislation that would fund Homeland Security to the tune of $40 billion. They’re also calling out the Administration for its refusal to acknowledge the existence of a “war on terror” that has been raging for over a decade.

Sen. John Cornyn, R-Texas, who is now the Senate Majority Whip, criticized President Obama for focusing on “political correctness” instead of talking tough against terrorism.

“We know that, for example, when Major Nidal Hasan made his attack at Fort Hood, they called that workplace violence,” Cornyn said, referring to the deadly 2009 shooting in Texas. “And they are calling the war on terror ‘overseas contingency operations.’ We need to call it what it is. Because that’s the first step to actually dealing with it on a realistic basis.”

Right now, the priority shouldn’t be to have a perfect policy out of the gate; if it’s coming from Obama, it’s not going to be amazing, and I doubt it will be realistic in the context of actual terrorists wanting to murder people. But once he opens the jar of worms, Republicans in Congress can work with what they’re given—even if that means ripping it up and starting over.

Senator McConnell is right—just tell us what you want, man! This is a non-starter unless Obama, Kerry, and other advisors give the Congress some idea of what it is they actually want the optic for this to be; because right now, the only signal the world is getting is that America is no longer to be taken seriously in the international theater.

Wish the MSM would report it this way … “Having just lost a cyberwar to North Korea, Obama is now in a stupor and can’t decide what to do next.”

President Barack Obama has a moral responsibility to push back on the nation’s journalism community when it is planning to publish anti-jihadi articles that might cause a jihadi attack against the nation’s defenses forces, the White House’s press secretary said Jan. 12.

“The president … will not now be shy about expressing a view or taking the steps that are necessary to try to advocate for the safety and security of our men and women in uniform” whenever journalists’ work may provoke jihadist attacks, spokesman Josh Earnest told reporters at the White House’s daily briefing.
http://dailycaller.com/2015/01/13/white-house-obama-will-fight-media-to-stop-anti-jihad-articles/

Looks like Barracula is more inclined to declare MORE war on the First Amendment.

Funny, though… He was silent as the grave WRT Abu Ghraib and the NYT daily obsession with it…for weeks on end.

Well his “Kinetic Military Action” (KMA) in Libya worked out so well, I don’t see why not.

Unless I misread the Constitution, Article I, Section 8 grants Congress the power to declare war, not the president.

He makes it up as he goes along, aided by his lapdog John Boehner.

When is Boehner’s bartender getting out of jail?

And Article 1, § 8, clause 4, of the U. S. Constitution specifically grants Congress the power to regulate immigration.

And yet Obama has seized that power unto himself.

Who needs a constitution or laws when we have the all-knowing, all-powerful Obama to show us a better way?

Be very certain that nothing in the language of any authorization allows him to justify attacking Israel. That has always been the dream of one of his close advisers, Samantha Power.

That’s probably why we haven’t seen a proposal or request from the White House yet.

They can’t figure out how to word it ambiguously enough to allow attacking Israel instead of along with as well as ISIS/ISIL, without being so vague as to be immediately rejected.

Stunning, when you think about the sick people holding high office in our country – and a news media that covers for them – and the RINO Party that assists.

For crying out loud, what kind of Middle East policy can we expect from this maladministration when one day it says that we need to back the rebellion against Hafez al-Assad, and then the next says we need to strike against the main part of that rebellion. And didn’t anyone notice that the anti-Assad people were long led and organized by the Muslim Brotherhood, those wonderful kissing cousins of the very folks who brought us 9/11.

Will Obama Declare War On ISIS?

He can’t. Only congress can.

Will Obama Execute Congressional Action On ISIS? is the question.

Obama has two years and nothing to lose. Whatever he agrees to up front may be safely and immediately ignored, because in its execution, Obama will slow walk it and effectively negate it, whatever ‘it’ congress comes up with re: ISIS. He spent nine months pondering whether to order more troops in Iraq. It doesn’t take that long. He dragged it out for political reasons, and he’ll do it again if he wants. There’s even less stopping him now.

Why would obama delcare war on ISIS – they’re on the same side.

There. He said it.