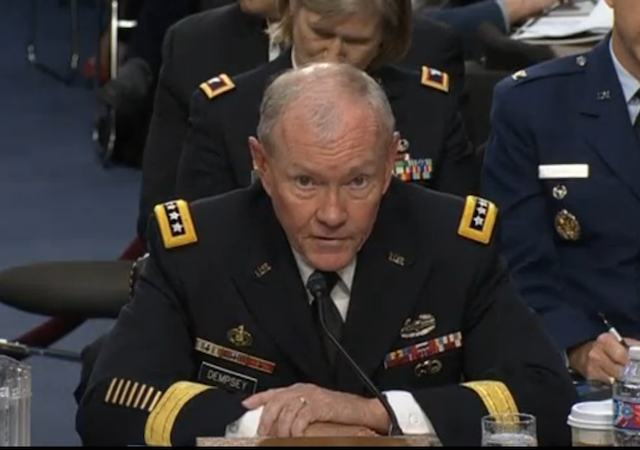 Back in September, we reported on word out of Iraq suggesting that members of our military currently stationed in Baghdad were receiving mixed messages about the point and purpose of their mission:

Officials overseas are calling out the Obama Administration on their jumbled approach to current actions being taken against the Islamic State in Iraq. The current mission against ISIS calls for diplomatic protection in addition to airborne and humanitarian missions, and military leadership can’t get a clear read on just how far President Obama is willing to go to destroy (or shrink, he can’t decide) Islamic extremism.

Biden on Wednesday delivered what was probably the toughest statement to date from the administration, declaring, after another U.S. journalist was beheaded by the Islamic State, “we will follow them to the gates of Hell until they are brought to justice.”

But his tough talk was at odds with a message delivered earlier in the day by President Obama, who said that while his administration’s goal is to “destroy” ISIS — it also is to “shrink” it to a “manageable problem.”

Amid the mixed messages, a source in contact with special operators in Iraq told Fox News that “frustration and confusion reign” among Americans on the ground there.

The source relayed the complaint of an unnamed special operator: “Chase them to the Gates of Hell? How the [f—] are we going to do that when we can’t even leave the front gate of our base!?”

Since then, the messaging coming out of the White House has spiraled to the point where not even high-ranking members of Congress can agree (semantics aside) about the nature of America’s involvement in the Middle East.

Today’s Senate Armed Services hearing only added to the confusion of both military personnel and civilians when Joint Chiefs Chairman General Martin Dempsey put to bed once and for all the idea that “boots on the ground is not an option.”

At the White House and on Capitol Hill, Washington is preparing for war. The accelerated campaign against Islamic State militants will include more airstrikes in both Iraq and – for the first time – Syria. And despite President Obama’s repeated assurances of a “no boots on the ground” policy, Joint Chiefs Chairman General Martin Dempsey told a Senate panel, things could change: “If there are threats to the United States, then of course, I would go back to the president and make a recommendation that may include the use of U.S. military ground forces.”
…
And the the man appointed to lead the Global Coalition against Islamic State…is retired U.S. Marine Corps General, John Allen. He’ll be leading an effort that is already raising concerns among anti-war protestors ..and some Republicans who question whether it goes far enough. Either way, the stage is being set for yet more US intervention in a crisis overseas.

It’s time to demand straight answers from the White House. I appreciate Dempsey’s candor and his willingness to go against the White House narrative, but it’s not enough. The United States does not exist in a bubble; if the American people are confused, imagine how our less powerful allies feel. This is unacceptable: either ISIS is a threat, or it isn’t. Either it’s possible we’ll put boots on the ground, or it’s not.

It’s time to decide, and plan for the consequences.

When you’ve taken every position, you can’t be wrong.

My father, a WWII veteran, would say the situation is “FUBAR”. Dad always did have a way with words. 🙂

I suppose the New York Times (experts on all things military) is going to have to explain to you people that what appears to the untutored and less nuanced as confusion is really part of Obama’s brilliant military strategy to keep our enemies off balance.

Unless you have licked the dust from Obama’s shoes, as any classically trained professional journalist with the highest ethical standards is willing to do, you can’t appreciate how successful his Middle East policy really is at keeping everyone confused.

The military brass must be doing all they can to bite their tongue while doing Ebola Boy’s public bidding.

They’d probably resign, but fear this freak having otherwise unfettered control of the military by the lunatic generals President Valerie Jarrett would replace them with.

I think the military brass is now completely made up of his nancy-boys and toadies. He’s been very thorough in getting rid of the rest.

What you hear on the media and see on TV is like a screenplay of a grand opera play. One should look behind the curtain. A World War has already been planned behind the backs of all people which will be forced to fight for their own Countries in their obligation as citizens. Obama is under strong pressure from the Zionists to have US ground troops in this War on behalf of Israel. All media and the many US politicians on payroll of Israel demand with one voice the involvement of the American ground troops against ISIS. But one should ask how was it possible for ISIS to grow so quickly, so organized and well-armed without having a State behind as sponsor. The chief of ISIS is Abu Bakr al-Baghdadi who spent time in a US prison before being released in 2009. It seems straight from Hollywood the new strategy of filming horrific beheading. Those tragic images broadcasted by ISIS are not less spectacular than those planes crashing on buildings about 13 years ago. A sense of spectacle far more familiar to a Jew from Hollywood than a Muslim from the deserts. In a World without coincidence, the sponsor is the same hidden hand responsible for 9/11. There is no doubt that the Zionists have all the means to enlist mercenaries of all Countries and Islamic extremists without having to show their face or their wallet. Through a strategy made of Terror and Deception, the Zionists will continue to monitor and to separate all people in hope to face many weak and divided oppositions rather than one strong and united. This next World War would want to appear like one between two blocks: US, UK and Israel at the helm of a western bloc versus Russia, China and the Arab States for a presumed eastern bloc. The Conflict instead must be redefined from the beginning and fought only pro or against Equality without distinctions for Religion, race or Country.
The Zionist strategy is Divide and Conquer.
A new Humankind will be like water and will submerge that idea.

Israel owns the world. Hilarious rant…thanks for the laughs.

I won’t give this blog-pimp any traffic. I recommend the same.