Who gets the nomination? This decision is happening NOW.

Who gets the nomination? This decision is happening NOW. 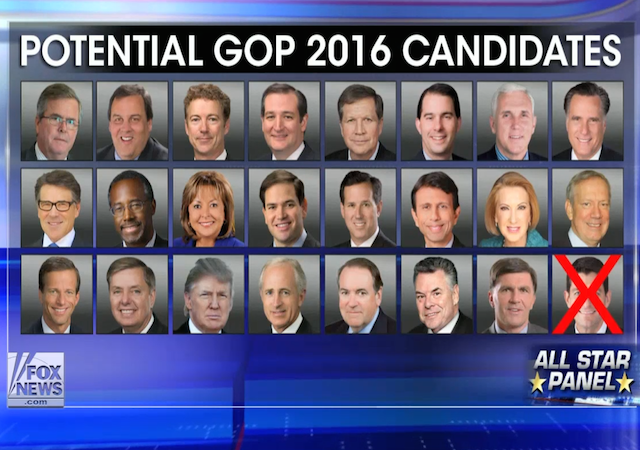 A clash of the titans? Or that sweet new car smell?

That decision might be made sooner than you think.

Starting in August of this year, Republican candidates for President will set out on the debate circuit; but even now, candidates are jockeying for key donors and supporters capable of helping them win the Republican nomination.

This past week on Special Report, panelists discussed with Bret Baier the changing dynamics of Presidential politics, new faces, and the Romney vs. Bush throwdown:

This cycle’s candidates know that they’ll need to bring something new to the table if they want to both energize the grassroots and expand their voter base to include people who wouldn’t normally vote for a conservative Republican—which is the main reason why the Romney and Bush candidacies have bene lampooned so thoroughly by the conservative new media.

For candidates like Scott Walker, the key to victory is balancing a strong policy background with a “new, fresh” approach to selling the Republican Party:

Since winning reelection in November, Walker has been maneuvering deliberately into position for a presidential bid. He recently hired former RNC Political Director Rick Wiley to manage his campaign, which is expected to launch in the next ​two months.

Walker received enthusiastic applause on several occasions—especially when pointing to his ugly battle with organized labor, and his subsequent victory in the 2012 recall election.

“We need to offer a new, fresh approach, one that comes from the states. The states are where we actually get things done,” Walker said. “That matters. It’s not enough just to give a speech.”

Of course, talk of a “new, fresh approach” also highlights the 47-year-old Walker’s youth compared to an older generation of prospective 2016 hopefuls, Democrat and Republican alike.

Outgoing Texas Governor Rick Perry, who is busy rebranding both himself and his party’s image, has taken a similar tack, emphasizing unity over purity tests and base-building over playing to an already-played out Republican base. The question is whether or not candidates like Jeb Bush, Mitt Romney, or a Santorum or Huckabee will be able to do the whole “capture the imagination” thing when they’ve all been around the block too many times to be considered “new” or “fresh.” (You could make the same argument about Perry, but he’s come out of the gate with the “new fresh” message, and he’s remade his image to the point that people may just believe it.)

This cycle won’t be over until it’s over, but you can expect whoever is serious about running to jump in the ring and start campaigning at your doorstep sooner rather than later. It’s the down side to having a deep bench.

It’s a fine collection. I favor former governors because they tend to be well-trained, and they have experience with the issues of great importance right now.

Better Sarah than Jeb, Mittens or the Jersey Whale

23 is too many. Also there are several on that list that attack their fellow party members more viciously than they ever have a dim, a lamestream media dim advocate or, open borders, or Islam.

I suggest a national Republican only “prequel” primary with the these 23 and all others that want to be considered on the ballot.

There are only two (Cruz, Walker), maybe three (Jindal) that I would consider voting for.

I will stay home if they re-run Romney, run Christie, Bush, Rubio or any of the Gang of Eight/Amnesty Repugnicans.

Elizabeth Warren thanks you for your temper tantrum…

My feeling towards any sanctimonious purist who brags that s/he didn’t vote in the 2012 elections because they couldn’t find their way to hold their nose and vote for the candidate the rest of their party nominated, is that “well anyone who doesn’t bother to cast a valid vote in any given election doesn’t have the right to complain about a single result of said election they decided to sit out”.

If you didn’t vote, I don’t want to hear your whining on anything political. YOU opted out, which is your right, but that means that *I* am going to give your subsequent /feels/ on the results of that election exactly no credence.

It’ll be exactly the same in 2016. Anyone who opted out of the democratic process, fine — but STFU for the next four years just like you did on Election Day. If we end up with yet another term of Constitution-ignoring liberals, you don’t get to complain about anything they do. At least not to me.

Held my nose and voted for limp wristed lying leftist Romney ONLY because of Ryan.

However, the GOP has lost/betrayed my trust way too many times. Unless they change/repent/return to conservative principles, I’ll write in a conservative.

We not only held our noses, we physically carried the Institutional Republican party to a freaking wave election that gave them control of both Houses. In return, they rushed to appropriate money for everything that Obama wanted for the next year, and to underhandedly fund [and therefore ratify] the concept of Presidential amnesty by decree; deliberately making sure they did it before the new Republican majority took office.

As we read and write here, the Republicans in Congress are writing a “comprehensive” immigration reform that will make the amnesty and open borders permanent [Republican spokesmen have told Politico and The Hill that the border security provisions will be stripped out in the Senate to avoid a veto]. The promised repeal attempt for Obamacare has been scaled down to repealing the Medical Device Tax.

What rational basis is there to vote for Republicans [president or congress] and believe that they will do anything but what the Democrats want? Especially since the Party is at war with anyone more conservative than either multiple loser by surrender Romney or anti-Second Amendment [one of the boards he resigned from to run was the Bloomberg Foundation that funds gun seizure laws], pro-Common Core, pro-Obamacare [another board he resigned from as the highest paid board member making more than the CEO was the Tenet Corporation that designs and operates Obamacare systems for states]JEB! Bush. If all they will allow are more DIABLO’s, it is time for a SECOND party because they have proved that voting for the Republicans is no different in governance than voting for Democrats. We have been lied to long enough.

I will no longer vote for a RINO squish. You and Amy in FL can call me names, lecture me about Warren/Hillary, I don’t care. You used the same argument the last two times and look what happened. I held my nose and voted for McCain and Romney, two of the poorest excuses for “conservative” candidates I have ever seen. I won’t do it again. And if the squish doesn’t win AGAIN I will have very right to voice my opinion and complain, because I will have voted (write-in if necessary) for the the candidate I felt was the most principled conservative. I am not a sanctimonious purist. I have just learned from my mistakes. You need to stop this. These people cannot win. What will it take until you see this?

At least half those people are non-starters, including the Comb-over King.

Enough with the weak jokes.

I see this as a decent Pres/VP pool to choose from. It would be great to have a 2 governor ticket. Just to pick one, a Walker/Martinez duo could be strong. Surely a number of these folks are thinking about the same thing. Start a campaign earlier rather than later to get name recognition. Then being a VP on a ticket is even more valuable.

Looking forward to watching Mitt Romney explain those videos of him praising Jonathan Gruber for his work on Romneycare, aka Obamacare.

I’ll wear a helmet while watching because Christie’s head will explode without a heckler or disgruntled citizen to yell at.

“Our next candidate supports amnesty as an act of love, wants to federalize education, and hasn’t ran for anything in twelve years. Ladies and gentlemen, former Lehman Brothers board member Je-e-e-e-b Bush!”

A few that are Bush III fans are already scolding tea party types, that we damn well better fall in line when Republican big money again demands a “centrist” that supports amnesty and common core. The RNC OWNS our vote dammit, and like Boehner and Mitch have made clear, they don’t care if we did give them majorities, the tea party is their betch and we will get nothing and better like it and stfu.

So anyway, I’m for Walker. Illinois elected a Republican governor, so maybe if Walker runs, he could take Illinois? People here are quite aware of the Democrat’s public union pension debt mountain.

By November 2016, who knows what other chaos will occur under Obama. But do we really need to continue the Blame Bush battle, or can we leave Bush Legacy in the past please?

So Bush III (Hillary Lite) can clearly state he can win without conservatives, but we conservatives better not say we won’t vote for him in the general, even though he already discarded us? Will his wife and son really give him the La Raza vote, to replace us?

Basically, his position is they should be legalized, one and all.

Walker is GREAT, but what good is GREAT if he wants to give it all away to illegal aliens?

Romney lost last time because 5 million conservatives didn’t show up. If the RINO’s nominate him AGAIN, he will lose by 10 million.

and if the GOPe picks him or Jeb or one of their other squishes, they will lose because neither the swing voters nor the base will support them, and for good & justifiable reasons.

personally, i think the people running the GOPe don’t WANT to win, because the sort of candidate who would win would also mean that they might lose their personal access to power & riches there in DC, which is all they really care about.

Romney suppresses the vote in every election that he enters.

I’m voting for a true conservative this time. Period. I am not propping up regressive establishment Republicans again. All that does is make them bolder, more arrogant, more powerful. As evidenced by the contempt they have for the base, for the TEA Party, for middle class Americans. I’m done.

If they want to fight leftists for leftist, regressive votes, then they can do that. I’ll wait for an actual conservative . . . .

Only a few people have it within their abilities to elect Hillary Clinton president, and they’re all pictured above along with people who can engineer her defeat.

The RINO’s are trying to suck all the oxygen out of the room before the conservatives can get going. We’ll see if that actually works.