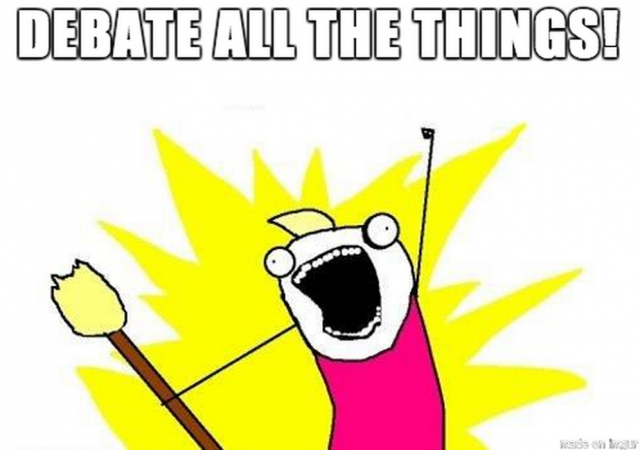 The dates are set for the 2016 presidential debate cycle—ARE YOU EXCITED??!!

Yeah, me neither. But the cycle looms like a dark cloud on the horizon, so we might as well get ready for it.

According to reports coming out of this week’s Winter Meeting, the RNC is drastically changing the way these debates are planned, structured, and covered. Instead of a barrage of debates, the events will be spread out over 7 months, and no one state will be allowed to host twice. The RNC is also taking steps to help campaigns more fully prepare, and has committed to bringing in a larger conservative media presence to cover the candidates.

From a press statement sent out by the RNC:

“The 2016 cycle is underway, and I can tell you it will be a landmark election for Republicans,” Chairman Priebus said. “By constructing and instituting a sound debate process, it will allow candidates to bring their ideas and vision to Americans in a timely and efficient way. This schedule ensures we will have a robust discussion among our candidates while also allowing the candidates to focus their time engaging with Republican voters.

It is exciting that Republicans will have such a large bench of candidates to choose from, and the sanctioned debate process ensures voters will have a chance to gain a chance to hear from them. The American people are tired of President Obama’s policies, and I am confident the debate process will enable candidates to communicate their ideas and ultimately help us elect a Republican president in 2016 to get our country back on track.”

Here’s the schedule as it stands. 9 dates have been officially sanctioned, with 3 more pending:

Whether the RNC actually honors its promise to make this whole process less painful remains to be seen, but I think they will. Last cycle, even as the candidates began to turn on one another, the electorate began to turn on the candidates—because we were sick of their talking points. The debate circuit became more of a running gag in the conservative media, rather than an opportunity for voters to get to know the person who could become president.

We’ll need to hold the RNC’s feet to the fire over who they choose to moderate these debates—we can’t afford another Candy Crowley-gate. It will be our responsibility to watch for media bias, and call it out when it happens.

But if the RNC keeps its word, and makes it easier for conservative outlets to take control over the narrative, it’ll be much easier to control the spin—and the fate of our chosen candidate.

Giving the MSM unfettered choice in broadcast “talent” would be like ….
(I am having trouble coming up with an analogy)

…. OK, try this.
For a debate about Christianity vs Atheism, and for the preliminary debate between Rev. Franklin Graham, Pastor Rick Warren to decide who represents Christianity, and Cardinal Bernadine, and using Richard Dawkins as the debate moderator.

So, only 2 rounds in the deep south and the potheads in Colorado and California gets a nod, but not Texas?

The only part of debate season I ever look forward to is VodkaPundit’s drunk-blogging of them.

I think it’s racist that MSNBC was ignored.

Place the 2016 GOP primary schedule next to this 2016 debate schedule and tell me what you see.

I wouldn’t give NBC a debate if they were the only network left.

But having too many debates just prolongs the ego trips of candidates who never had a chance, have no support, and can’t raise any money. And then others hang on longer than they otherwise would because it gives them free promotion for their books on sale.

In the end, having 20 debates hurts whoever gets the nomination because as a candidate – whoever it is – becomes the frontrunner, the others have to gang up on them.

Of course, there is a small contingent in our party who don’t care if our nominee wins if it isn’t their favorite, and would rather see the party split and losing than winning with someone else. To hell with them.

“Of course, there is a small contingent in our party who don’t care if our nominee wins if it isn’t their favorite, and would rather see the party split and losing than winning with someone else. To hell with them.”

1. It is not a small contingent.

2. They are abandoning your party in record numbers.

3. They won’t waste their vote a third time after McCain and Romney.

4. They don’t care if your party splits.

5. They don’t fear hell after two terms of Obama thanks to your party’s ineptitudes.

Are they going to let the DNC pick the narrators again?