The End–and Beginning–of the Perry Era

The End–and Beginning–of the Perry Era

“Be true to Texas always, and she will be true to you” 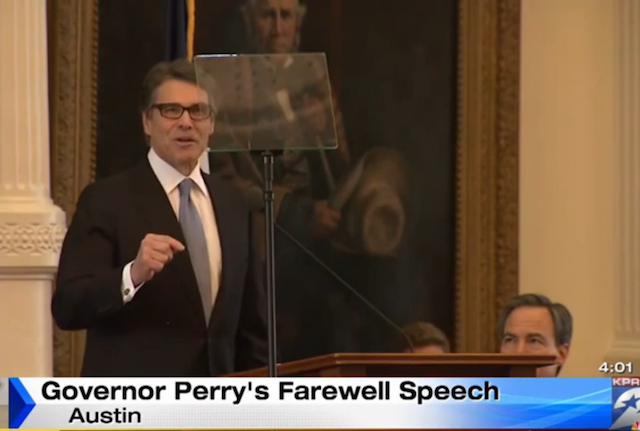 Yesterday, outgoing Texas Governor Rick Perry delivered his farewell address before the Texas legislature. Perry, who is the longest-serving governor in Texas history, used his time at the podium not only to highlight his accomplishments as Governor, but to lay out a rough outline of how his governing style would take shape on the national stage.

“I have come here to reflect on what we have done together, and to say farewell. But most of all, to tell you it has been the highest of honors to serve as your governor for the last 14 years. I believe in public service, that it is among the most honorable of callings,” said Perry in the nearly half-hour speech. He said, “Texas is a state where the impossible is possible, where the sons and daughters of migrant workers can aspire to own the farm, where the children of factory workers can build new age manufacturing facilities, where the son of tenant farmers can become governor of the greatest state in the union. In Texas, it’s not where you come from that matters, it’s where you are going. Texas doesn’t recognize the artificial barriers of race, class or creed. The most vivid dreams take flight from the most humble beginnings. And so it was for me.”

That isn’t what a farewell address sounds like—that’s what a campaign kickoff speech sounds like.

Perry’s 2016 run is seen by some as a near-certainty not only because of the economic success that Texans are so prone to brag about, but because of Perry’s own resurgence as a political force of nature.

After his disastrous 2012 presidential campaign, many expected him to fade into the shadows and enjoy a quiet retirement; but Perry is above all things a savvy and experienced politician who has witnessed enough scandal during his time in Texas politics to know what The End looks like.

Perry has managed to separate himself from the pack of other 2016 contenders by embracing a governing style that focuses less on putting out fires between warring factions and more on carving out a path to success that isn’t exclusive to his own political party.

Perry struck a bipartisan chord in his remarks, urging fellow Republicans to “not place purity ahead of unity.”

“There is room for different voices, for disagreement,” he said. “Compromise is not a dirty word if it moves Texas forward.”

State Rep. Jeff Leach (R-Plano), who hails from the conservative wing of the Republican Party, did not take objection.

“I think he’s right,” Leach said. “There are certain convictions that all of us have that we don’t compromise on, but where we can find balance and prudent compromise, I think we’ve done that.”

Balance is key to building a foundational voter base, and Perry has it in spades. From his commitment to job growth, to his focus on implementing diversion programs for non-violent drug offenders, Perry has done a great deal of work over the past few years convincing people that, while talking points make for snappy Facebook posts, the real red meat comes from governing.

Still, Republicans enjoy the deepest bench they’ve had in at least two cycles, so an eventual Perry/[Choose Your Own Adventure] ticket isn’t anywhere near a certainty. But for now, conservatives should take comfort in knowing that at least one candidate circling the ring knows how to win friends and govern his way to success.

Where’s Perry? Gone off to join the OWCA I suppose.

Jeb who? Booooosh? Are you out of your ever loving mind?

[just having fun – but no no no to jebster]

“Be true to Texas always, and she will be true to you” What the hell does that even mean?

Obviously, you are not from Texas.

that’s right, you’re not from Texas, but Texas loves you anyway… 😉

Son, if I have to explain that to ya, then you just wouldn’t understand. We do, and that’s what matters.

Perry, Walker or Jindal would all be fine by me.

Three exceptionally qualified candidates – but only Perry has a national network of fundraisers already set up so he could compete with Jeb and Romney in that department. Texas is a big success story and a big state, so Perry has to be taken seriously.

The question is can Walker and Jindal raise that kind of money without those big donors? If either can, he immediately becomes a strong contender. But both men suffer the same problem: they are issues and results oriented, and not used to banging the drums to get supporters excited.

just say “NO” to Mittens and Jeb… we don’t need to nominate either loser.

unless, of course, the GOPe’s goal is to lose, which seems more & more likely every day.

What has the “GOPe” got to do with it? Our nomination is determined by delegates, and more of our delegates are selected directly by the people in primaries and caucuses than any other nomination process in the world, including the Democrats’.

Unless you consider the majority of Republican voters to be “the Establishment” like some kind of hippie might. In which case, go back to your drum circle and have a brownie.

Walker for obvious reasons – he’s got it all, got it in a deep blue state, and in my mind is the one most able to bridge the conservative/establishment gap.

Rubio for VP to match Florida with Walker’s Wisconsin (and assuming Rubio learned his lesson about dealing with the establishment amnestarians).

Cruz for VP because I don’t want Cruz in the presidency. I want him available for the first Supreme Court opening.

I want no candidate whose name I’ve known more than ten years.