It comes so naturally, the Times’ Editors don’t even need a formal New Year’s Resolution. 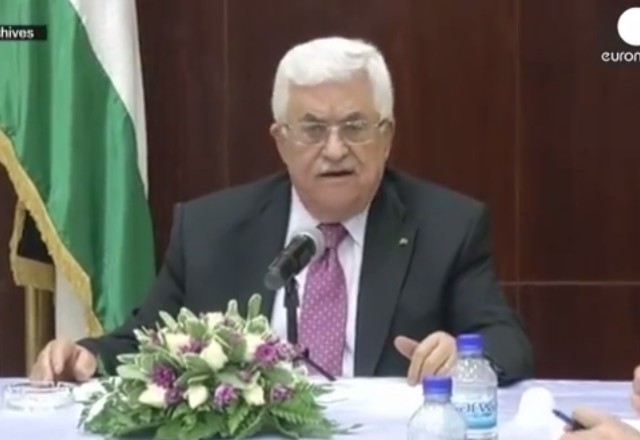 Today the New York Times, predictably, blamed Israel for Palestinian Authority President Mahmoud Abbas’ efforts to internationalize the Palestinians conflict with Israel. According to the Times, it is Israel’s fault that Abbas attempted to get the United Nations Security Council to impose an agreement on Israel and, failing that, to apply to join the International Criminal Court (ICC).

In an editorial today, The Palestinians’ Desperation Move, the Times argues:

Mr. Abbas began this week by insisting that the Security Council approve a resolution to set a deadline for establishing a Palestinian state, including the phased withdrawal of Israeli forces from the West Bank by the end of 2017. After heavy lobbying by the United States and Israel, the resolution received only eight of the nine votes needed to pass in the 15-member council. The fact is, the United States, which voted against the measure, supports a Palestinian state. And France, which broke with the Americans and voted in favor, acknowledged reservations about some of the details.

Following this defeat, Mr. Abbas moved swiftly on Wednesday to take an even more provocative step in joining the International Criminal Court, through which the Palestinians could bring charges against Israeli officials for cases against their settlement activities and military operations.

While he was under strong pressure from his constituents to do this, he knew well the cost might be great. “There is aggression practiced against our land and our country, and the Security Council has let us down — where shall we go?” Mr. Abbas said at his headquarters in the West Bank city of Ramallah.

Note that the Times describes these moves not as wrong, but as counterproductive.

But both the appeal to the Security Council and the effort to join the ICC violate a premise of the peace process: that any agreement should come through bilateral negotiations.

Of course Abbas has nothing to show to his constituents. He hasn’t made an effort.

Abbas’ failure to make a deal now reflects a desire, as Jackson Diehl of the Washington Post put it in 2009 shortly after President Barack Obama’s inauguration, “that the United States will simply force Israel to make critical concessions.” Diehl, who had interviewed Abbas at that time portrayed him as playing a “waiting game.”

Then in 2011, Abbas wrote an op-ed in the Times in which he laid out his intent.

This is exactly what Abbas did this week. After scuttling negotiations early in 2014, Abbas went about internationalizing the conflict exactly as he wrote that he would. Going to the Security Council and then the ICC were not desperate moves; they were not done out of “frustration,” to take another term used by the editorial, but deliberate moves.

By ascribing motives such as “desperation” and “frustration” to Abbas’ efforts to impose unfavorable terms upon Israel, the Times absolves him of his responsibility for pushing peace further away.

This isn’t rocket science. It’s simply a matter of paying attention to Abbas’ career, especially in the past five years. The editors of the Washington Post got it right on Tuesday, by putting the blame on Abbas and blasting him for his unilateral efforts.

What makes the Times’ denial of reality worse is that two key data points—that appeared in their own publication—contradict their claims. As noted above, it was a column in the Times that just last week identified Abbas as the party who scuttled the American peace efforts last year. In addition, Abbas himself wrote his plan in the paper four years ago.

The editors of the New York Times have the truth in front of them, but refuse to see it.

““There is aggression practiced against our land and our country, and the Security Council has let us down — where shall we go?” Mr. Abbas said at his headquarters in the West Bank city of Ramallah.”
They have no country, never have. They have no land, never have. They are a mix of Egyptians, Saudis, Jordanians, Lebanese and Turks.

Trivial detail for Israel haters. It’s all about “rights”, “justice”, and the other words with their meanings distorted. Most important is the narrative. And the narrative is that Israel is the only obstacle to Abbas an his people getting what they deserve. Why else excuse all unproductive action as enticed by and the fault of Israel?

Israel is not an obstacle to Abbas and his people getting what they deserve. Israel doesn’t want to eliminate even a fictional people.